Cranberries, or something that vaguely resembles the shiny red fruits, will grace many holiday tables this season, but few people know how the fruit earned its place of honor at the harvest table. 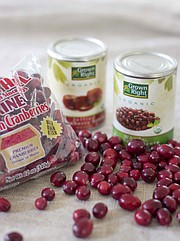 An assortment of cranberries

When settlers arrived in North America, cranberries were a staple in the diets of many Native Americans. Wild cranberries grew in what is now Massachusetts and surrounding states as well as farther west in present day Wisconsin, Oregon, Washington and parts of Canada. Cranberries were foraged and eaten fresh, dried or mixed with dried deer meat for pemmican. The fruits were also used to make dyes and for medicinal purposes.

European settlers quickly adopted cranberries into their diets and incorporated them into sauces and puddings. By the 1820s, cranberries were being produced commercially and exported to Europe.

In 2012, the industry was valued at about $385.5 million in the U.S., according to the Agricultural Marketing Resource Center (AgMRC). The AgMRC also reports that about 95 percent of the cranberries consumed in the U.S. are in the form of sauce, juice or other processed products.

Most of the commercially produced cranberries in the U.S. originate in Wisconsin and Massachusetts. New Jersey, Washington and Oregon are also known for their cranberry crops. The small percentage of cranberries harvested for fresh consumption are removed from plants mechanically. Cranberries for processing are also harvested mechanically but after fields are flooded. Since cranberries float, the berries can be removed from fields more easily in this manner.

Can we grow them in Kansas?

Cranberry plants are grown in bogs with very low pH, high organic matter and good drainage. In commercial production, bogs are man-made, so conceivably the same could be done or at least attempted here. An aspiring cranberry grower in the Midwest would likely have the greatest success by excavating the area where the vines would be planted and using peat moss to build a bog. Maintain soil pH between 4 and 5.5.

Highbush cranberry, which is commonly grown in Kansas and marketed as an ornamental shrub, is a different species with less desirable fruit.

Many references report that the cranberry is one of only three fruits native to North America, along with the blueberry and Concord grape. This broad statement is only partially true. Several other fruits are believed to be native to North America, but some, like strawberries, are also documented in Europe prior to North American settlement. Others, including pawpaws and persimmons are native but are considered of little economic importance.

— Jennifer Smith is a former horticulture extension agent for K-State Research and Extension and horticulturist for Lawrence Parks and Recreation. She is the host of “The Garden Show” and has been a gardener since childhood. Send your gardening questions and feedback to Lawrence Living@ljworld.com.