When: Dec. 4 to 7. The auction is Thursday from 7 to 11 p.m., and the houses will be on display to the public Saturday and Sunday. Check online for a full schedule of events.

Big Brothers Big Sisters of Douglas County is preparing to host its 20th annual Gingerbread Festival and Auction. More than 100 gingerbread houses, created by adult and children volunteers, will be on display from Dec. 4 to Dec. 7.

The fundraiser kicks off Thursday evening, when the top 15 gingerbread houses will be auctioned off to benefit Big Brothers Big Sisters' local chapter. The creations usually raise about $40,000 total, while some (very special) houses can pull in around $2,000 each, says area director Stacie Salverson-Schroeder.

"It's different every year," she says of builders' creations. "That opportunity to be artistic and bring their own personalities into it makes it amazing."

A few of those gingerbread artists were willing to share what it takes to build the perfect house and why they do it.

A lot of little things can go wrong when working with gingerbread — sugary adhesive doesn’t always stick; sagging walls and ceilings collapse; delicate pieces break apart — but for Allen Blair, a trained chef with 30 years of culinary experience, it’s all child’s play compared with what happens next.

“I think the biggest challenge for me is getting it from my house to the auction,” says Blair, who works as executive chef at Olathe’s Shadow Glen Golf Club. “Your heart is going a million miles an hour because if you hit a bump too hard or slam on your breaks getting there, it could be disastrous.”

In less than a week, Blair will make that nerve-wracking journey for the 15th time, loading his creation into the car and driving less than 10 minutes from his home near eighth and Indiana streets to Abe & Jake’s Landing.

It’s not a long trip, but he’s carrying some precious cargo. Blair’s elaborately engineered confections — a gingerbread lighthouse complete with a rotating electric light at the top remains his favorite — can fetch up to $1,500 each.

He’s been working on this year’s entry, an “alpine cottage-style house,” for about four weeks now. Blair’s miniature church won first place with its ornate royal-icing pattern in 2013, so he’s trying to use the technique again.

“I want it to be white and Christmas-y,” says the gingerbread veteran, who plans on using gum paste to make snowmen and presents. Evergreen trees made of ice-cream cones will also make an appearance.

Sadly, it’s all in pieces now. One of the cottage walls broke in an accident, requiring Blair to redo that section and sidelining much of the project.

He can’t do much until the royal icing — a mixture of confectioner’s sugar, water and meringue powder — dries out, so he's biding his time until then.

“It’s going to be a late-night push for me,” says Blair, who passes the hours listening to KU games on the radio.

Seeing the finished product is nice, Blair admits, but it’s not the most gratifying aspect.

“I can’t really volunteer a lot because of my schedule and what I do for a living, so this is one of the things I can do to give back to the community,” he says. “It’s not a huge thing by any means, but it’s what I can do.” 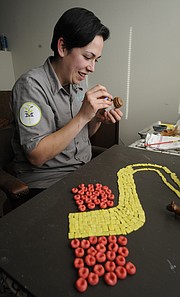 Amber Bjarnason, a pastry chef at Merchants Pub and Plate, works on a scene from the "Wizard of Oz" in her gingerbread creation.

For the next few days, Amber Bjarnason’s Lawrence living room will double as a base of operations for a very important mission. The task at hand: re-creating scenes from “The Wizard of Oz” using only edible materials and fitting it all onto a 2-foot wooden plank.

“I’ve basically had no life for the past few weeks,” jokes Bjarnason, who has spent a total of 50 hours on the project so far, and suspects she’ll work another 30 before all’s said and done.

It’s only her second year as a builder, but Bjarnason plans on making a name for herself among the gingerbread elite.

Bjarnason, who works as pastry chef at Merchants Pub & Plate, made a miniature replica of the restaurant for her first auction. It was her first gingerbread house since an ill-fated endeavor at age 12.

“I didn’t really know what I was getting myself into,” she recalls. “But after seeing everyone’s at the auction, I’m definitely trying to step my game up this year.”

Her edible Oz diorama includes a Munchkinland of marshmallow homes topped with roofs fashioned from reshaped Tootsie Rolls (Sour Patch Kids will stand in as villagers) and a yellow brick road made out of yellow Starbursts.

She also plans on making all the main characters — Dorothy and the gang, plus Glinda the Good Witch and the Wicked Witch of the West — as well as a glittering Emerald City covered in green sprinkles.

The dog lover even made a tiny Toto out of a Tootsie Roll.

“They like to sit right by my feet and snore away while I’m working,” Bjarnason says of her pets, a Puggle named Ginsburg and a Jack Russell and Chihuahua mix named Lola.

It’s a lot of “tedious details,” says Bjarnason, who has surrendered her dining table and tiny kitchen for the project. Luckily, she was able to use Merchants’ industrial-sized mixer for most of the baking, but “pots with gum paste” and “little containers of royal icing” fill up the 5-by-5-foot cooking space.

Just last Sunday, she finished up the project’s crowning glory: Dorothy’s house. Bjarnason used pieces of gum, tinted brown with gum paste, as shingles. The famous tornado is made of Rice Krispie Treats, which she plans on wrapping with licorice and cotton candy.

Amber Bjarnason, a pastry chef at Merchants Pub and Plate, has recreated three scenes from "The Wizard of Oz" in her gingerbread diorama.

“I’m ready to win,” she says with a laugh. “I’ve put in a lot of hard work, so I hope even if I don’t win, I can still get a lot of money to go toward donations.”

For most people, gingerbread is a treat usually reserved for Christmas and wintertime festivities. That’s not the case with Clark Fulton, whose dedication to the craft of gingerbread houses is a year-round job.

“I stewed about it for most of the year for how I’d do it,” he says of his current project, a 30-pound edible dwelling partly inspired by the real-life Carson Mansion in Eureka, Calif.

Fulton’s intricate creations have wowed auction attendees for “five or six years” now, and this year’s entry promises to be no different.

Construction officially began in September, though Fulton began accumulating his materials throughout the last several months, keeping an eye out for sales on Texas toast during routine trips to Dillons.

“I dry it in the microwave and then sand it down and make squares out of it,” says Fulton, who says he’ll occasionally munch on a piece or two while working in his basement. “It’s really easy to build a basic structure with that, and then I can just put gingerbread on the face of it.”

He’s covered his toast foundation with paper-thin pieces of gingerbread (Fulton uses a special table saw to slice them down to size) tinted with black and turquoise food coloring. They’re meant to give off a “Southwestern mosaic tile” look, he says.

Perhaps the most impressive details are the stained-glass windows made of melted Jolly Ranchers. Battery-powered lights illuminate the house from the interior, creating a warm, colorful glow.

Fulton, a geologist by trade who now works as a substitute teacher, is also a card-carrying member of the Lawrence Art Guild. The gingerbread master has nurtured a fascination with the natural world — and its inherent artistry — from a young age.

“I think some of what drew me into geology was artistic, actually,” says Fulton, who liked to hunt for rocks as a kid. “I was probably drawn to the lapidary end of it, which was more artistic than the geology itself.”

He describes his creative process as “experimental.” Fulton’s gingerbread projects, elaborate though they may appear, don’t require a blueprint, he says. He’ll make a sketch first, then go from there.

The mosaic mansion is nearly complete, but there are a few finishing touches to be worked out.

“I’m not sure yet what I’ll do,” Fulton says about deciding on snow or grass to go outside the house. “It usually ends up being right at the last minute.”