James McBride, the reigning winner of the National Book Award for fiction, will bring his signature blend of words and music to Lawrence this week with a reading of his most recent work, “The Good Lord Bird.” 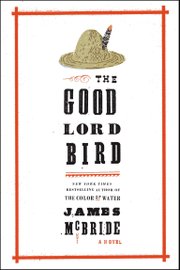 What: James McBride reading of "The Good Lord Bird"

His visit will mark the first of the Lawrence Public Library’s annual Ross and Marianna Beach author series, a new program funded by the Beach family’s namesake foundation and the National Endowment for the Humanities. Library staff plan to bring nationally recognized authors to the city once every year.

The series’ selection committee ultimately decided on McBride as the inaugural author because of his book’s connection to Lawrence history, says Kristin Soper, the library's events coordinator.

“The Good Lord Bird” is narrated by Henry Shackleford, a young slave living in Kansas during the turbulent Bleeding Kansas era, and details his at-times funny and bizarre adventures with John Brown and the abolitionist’s 1859 raid on Harpers Ferry. Shackleford, whom Brown calls "Little Onion" and mistakes for a girl, also encounters other historical figures like Frederick Douglass and Harriet Tubman during the events of the book.

McBride’s humorous prose, which some critics have compared with Mark Twain's, allows the narrative to shed a new light on slavery and racism, says Laura Mielke, an associate professor of English at Kansas University.

“I think that the tragic mode can be a very powerful way, as writers in that period knew, to break down the barrier between the enslaved person and the free person. But when the tragic mode is all that’s used, the reader becomes numb and stops listening,” says Mielke, who specializes in 19th century American literature. “Comedy can show the absurdity of one human being treating another this way. It can break through to the reader in a way that a more serious tone could not.”

The book offers a irreverent take on Brown, the larger-than-life historical figure who has become a mythologized “local mascot” of sorts.

Rather than focusing on Brown’s “heroic moments as a fighter” or his “eloquence in the courtroom,” McBride offers a rare glimpse of the real man, warts and all, Mielke says.

Some of her favorite moments in the novel come from a recurring joke about Brown’s religious fervor, specifically his lengthy prayer sessions.

“Everyone just braced themselves whenever he began to pray,” Mielke says. “Henry would say, 'Oh my goodness, here comes another one.’ It’s fun for 21st-century readers to think of Brown that way.”

During his reading, McBride will combine his book’s irreverent humor with music, pausing between passages to sing and riff on his saxophone with The Good Lord Bird Band.

Lawrence’s Ninth Street Baptist Church choir will join McBride for the finale with “Let the Church Say Amen.” It's a logical combination, says choir president Jasmine Moore, whose largely African-American congregation has been a landmark in Lawrence for more than 150 years.

“I think anytime you’re looking for a narrative or story dealing with black history in America, gospel goes hand-in-hand with it,” she says. “It’s a great opportunity to support a black author and share gospel music with an audience that may not know it.”

It’s that sense of community involvement that Kathleen Morgan, director of development and partnership at the Lawrence Public Library, hopes to cultivate with the library’s new author series. Readings, she says, will remain free and open to the public, as is the case with McBride’s on Wednesday.

Tickets for the event quickly ran out, but Morgan invites people to show up 15 minutes early to fill in any open seats.

“The community has rallied around the library in terms of support and funding and everyday use, and that is not the case in every community. We’re so fortunate to have that here,” she says. “The fact that we can bring in this author is reflective of that community support.”