A family affair: Foxy By Proxy pull together to stage annual Halloween Hextravaganza

Foxy By Proxy is a family, its members say — a kooky, demented clan of “weirdos.”

Cost: Tickets cost $10, and can be purchased online or at the Liberty Hall box office. Must be over 18 with a valid ID to enter.

Gathered around the fireplace at Frank’s North Star Tavern, the Lawrence-based burlesque troupe’s de facto headquarters, five of the group’s 16 members are discussing costumes for their upcoming Halloween Hextravaganza. It all looks a bit like the strangest family portrait ever taken.

On this crisp fall afternoon, only half of the quintet is dressed in stage getups, but as is often the case with Foxy By Proxy, the lines are a bit blurred.

Christopher Muetz, 22, is the group’s sole male dancer. He’s wearing a pair of burnt-orange pants, a white doubled-breasted sportcoat, high-heeled oxfords and a wide-brimmed straw hat, all enhanced by a face covered in makeup. He blends right in with his friend Jen Young — a purple vision in an "I Dream of Jeannie" costume — but he says his look is just “today’s outfit.”

Despite his colorful appearance, Muetz says he’s more of a quiet type. On stage, though, he’s Donny Dapper, a play on the suave, elegant Don Draper from “Mad Men.” His acts, which feature hula-hooping and body manipulation, are an opportunity for him to shed his everyday persona and become someone else.

“I’m not generally a very adventurous person, so I go out of my way to force myself out of my comfort zone,” says Muetz, a hotel concierge by day. “I found that being on stage has really helped my confidence. I fell in love with performing.”

Like Muetz, 23-year-old Maddy Roger also needed a bit of nudge before taking the plunge into the sequined, salacious world of Foxy By Proxy.

It came from her longtime friend Taylor Stephens, and it was more like a shove, the pair recalls.

Roger may have protested at first, but Stephens, also known as “Frenchy Fondelle,” promptly told her to “shut up and do it.”

Luckily for the both of them, she did. The “best buddies” attended dance classes together as kids — ballet, jazz modern. Ten years later, and they’re still dancing together.

It’s liberating, agrees 29-year-old Jen Young, known in burlesque circles as the “Scarlet Harlot.” Young, a longtime “dyed redhead,” had done some pinup modeling and roller derby before helping establish a fledgling Foxy By Proxy five years ago. For Young, who describes herself as a creative “jack-of-all-trades” with her hand in bartending, photography and cake decorating, burlesque offered a new way to express herself.

She's seen burlesque grow in popularity over the past decade or so, thanks in part to its increasing recognition as a legitimate art form.

Liberty Hollis applies latex and paint to a mask for a Foxy by Proxy show. Members piece together outfits from new and used clothes as well as create their own eclectic outfits.

Foxy By Proxy differs from traditional burlesque, namely because half of its members don’t even strip on stage. 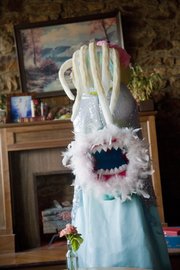 “It’s not really the main focus,” says 35-year-old Liberty Hollis, a stay-at-home mom who operates a scrap yard with her husband when she’s not on stage as “Honey Caprice” or creating elaborate outfits for Foxy’s shows. “The removal is there and the seduction aspect is there, but it isn’t everything.”

Those who still turn up their noses at the genre probably don’t fully understand it, Young says.

“I’ve had a couple of family members and old friends of mine from back home say things like, ‘How can you be stripping on stage and still consider yourself devoted to your husband and focused on your family?’” Young says. “But to me, what we do is just as much a form of artistic expression as painting a picture or making a sculpture.”

For the most part, though, Young feels the Lawrence community has embraced Foxy By Proxy and its unorthodox take on burlesque.

With its annual Halloween show less than a week away, the group is busy putting the final touches on the holiday spectacular, which will feature plenty of Foxy’s signature satire. Watch out for Illuminati symbolism, “satanic stuff,” Tim Burton influences, a one-eyed monster and '70s horror movie soundtracks. An ordained minister (still not a “real” reverend, Young says) will preach throughout the show.

The last month or so has been crunch time for Foxy By Proxy. Weekly meetings, twice-a-week rehearsals and last-minute touches to costumes, props and sets require a great amount of teamwork and planning.

That’s where the group’s “unseen helpers” come in. Significant others, parents and even children are enlisted for the job. Young’s 5-year-old son offers opinions on the costumes, and her husband, Mike, serves as sound technician.

“I would call him a Foxy," Young jokes of her spouse. "A lot of us have matching tattoos. Once he gets the fox tail, he’ll totally be in."

They’re all part of the extended Foxy By Proxy family, says Maddy Roger, a relaxation specialist who performs as “Dolly Dimples.”

Roger’s great-grandmother gave her the nickname as a kid. She passed away long before Roger joined the troupe, and never got to see her great-granddaughter perform burlesque on stage.

But Roger still has a “superfan” in the family.

“My mom comes to every show. She brings signs. She even cries,” Roger says. “She’s my cheerleader.”