This spread from Jade Garden features a variety of Szechuan dishes. Pictured here, clockwise, are shiitake mushrooms and bok choy, ribs in a hot pot, Chinese eggplant with shredded pork, flounder with carrots, celery and black mushrooms, and a soup with beef and chili flakes.

Here’s a revelation for you: The Chinese food many of us grew up with — think crab rangoon, General Tso’s chicken and the like — isn’t really Chinese. Those recipes, long staples in suburban Chinese restaurants across the country, are American versions of Chinese food, cultivated through generations of immigrants to appeal to a more western palate.

But in Lawrence, a handful of Asian eateries are offering something else: real Chinese food.

While definitions of “authentic” may differ from place to place, Asian restaurateurs say traditional Chinese cuisine is healthier than its Americanized counterparts, and tastier, too.

“American Chinese food has been around a long time. This is new,” Lisa Koay, owner of Jade Garden, 1410 Kasold Drive, says about a growing interest in authentic Chinese cuisine. “Some Americans are really into Chinese food, especially in Lawrence.”

Her restaurant’s traditional Szechuan menu, while mostly popular with Chinese college students craving a taste of home, has attracted quite a few non-Asian customers within the past few years.

In fact, many of her regulars who try the authentic menu have not returned to the Chinese-American dishes. 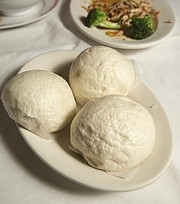 Panda and Plum Garden's Chinese bread, called mantou, is steamed rather than baked, and has a soft texture.

Where to find authentic Chinese in Lawrence

Here are a few restaurants in town that offer traditional Chinese dishes.

“People probably get tired of beef and broccoli,” Koay says with a shrug.

At Panda & Plum Garden, 1500 W. Sixth St., Lucy White and her family have been serving up traditional fare from their authentic Chinese menu for more than 20 years.

The west Lawrence restaurant opened in 1986 as the Panda Garden, and has two menus: one geared more toward American audiences, and one featuring classic recipes from China’s Szechuan province.

With dishes like the thousand-year egg and a spicy stew made with pork blood and intestine sausage, the authentic menu contains more than a few ingredients that might seem foreign or downright exotic to the mainstream American diner.

It’s a bit of a surprise, then, to find familiar favorites like Kung Pao chicken listed next to, say, the tender marinated pig ear. At Panda and Plum Garden, customers will find a version of the popular dish on both menus.

The secret, White says, is in the sauce — or lack thereof. The Americanized dish contains lots of vegetables and is served in a rich brown sauce, while its authentic counterpart does not.

“Our authentic dishes don’t have any sauce, or just a little. Anything with a lot of sauce of sugar is not as healthy,” says White, who was born in Taiwan. “American people are used to having sugar and oil, but authentic Chinese, in comparison, is more like stir fry.”

Above all, Szechuan food is spicy. Its flavors are characterized by ingredients like chili peppercorn, fermented bean paste, cumin and fennel seeds, in contrast to sweeter Chinese-American dishes that have origins in Cantonese cuisine.

The heat-packed cuisine was already somewhat of a trend in China before slowly making its way to the U.S., says Will Soo, who helps run his family’s restaurant Thai House, 711 W. 23rd St.

His restaurant offers Thai staples as well as Korean street food and classic Szechuan dishes. About 90 percent of the customers who order from Thai House’s classic Chinese menu are Asian, he says, though an adventurous minority of non-Asian fans has accumulated since the debut of the menu in 2010.

It’s a niche market, he says, but it’s growing.

“People have become more cultured,” says Soo, a graduate of Johnson County Community College’s culinary program. “I believe if something different is offered, someone’s going to try it. And if it’s delicious, the word will get around.”

For Soo, who was born in Missouri to Chinese parents and grew up eating — and loving — Chinese-American food, there’s no wrong way to enjoy his heritage’s cuisine. He even tweaked his recipe for General Tso’s chicken to give the sauce a smokier flavor reminiscent of American barbecue.

“I’m not a big fan of doing really authentic stuff, because I believe food should evolve,” he says. “Everything you eat has evolved from a classic recipe. Everyone has their own variation.”