Michael Dieker, who plays Seymour, talks with with the plant, Audrey II, at dress rehearsal for "Little Shop of Horrors."

“Little Shop of Horrors” opens Friday at Theatre Lawrence and runs through Oct. 5. Curtain is at 7:30 p.m. except Sundays, when it is 2:30 p.m. Tickets are available by calling the box office at 843-7469 or online at theatrelawrence.com. 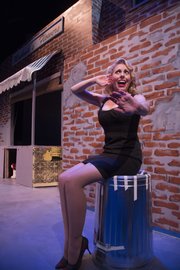 Erin Fox who plays Audrey goes through her lines on Monday September 15, 2014 at a dress rehearsal for "Little Shop of Horrors" at Theater Lawrence.

From left, singing during the opening act Clara Lehr, who plays Chiffon, Raemona Spicer, who plays Ronnette, and Melia Stockham, who plays Crystal, dance and sing through dress rehearsal for "Little Shop of Horrors" at Theater Lawrence.

John Robison, who plays Orin, during dress rehearsal for "Little Shop of Horrors."

When the star of the show is a talking, singing, man-eating plant, it takes a lot of skill and coordination for the cast to bring “Little Shop of Horrors” to life on the Theatre Lawrence stage to kick off the season Friday.

A rock/horror musical and spoof of 1950s science-fiction movies, “Little Shop of Horrors” follows nerdy florist Seymour as he raises a plant named Audrey II — after his love interest — that needs to feed on human flesh to survive. Throughout the musical, Seymour has to keep finding ways to feed the plant while keeping his dark secret. Meanwhile, Audrey II grows. And grows. And grows.

As Audrey II transforms from a small Venus flytrap-looking puppet to a monstrous one over the course of four phases, operating the mechanical puppets becomes quite challenging, says director Terrance McKerrs.

“The puppets get bigger and bigger, and the last one is like 10 feet tall,” McKerrs says. “When you get to the big one, you need very strong people to manipulate them.”

Four out of 12 total cast members make up the one role of Audrey II. Three puppeteers are responsible for the various plant puppets' movement, while a separate off-stage cast member provides its voice.

One of Audrey II's puppeteers, Kay Traver, says it’s a physically demanding role. From inside the largest puppet, she focuses solely on moving the mouth, while another puppeteer, Mario Bonilla, moves its body back and forth. Puppeteer Liam Elliot uses his entire body to move one of the other three puppets.

“We have to videotape the rehearsals and watch it later in order to play with [the puppet] and give it motion,” Traver says.

Andrew Ramaley supplies Audrey II’s voice. Using a mic offstage, Ramaley sings R&B solos or “laughs maniacally” while playing the carnivore bent on global domination. He needs to act in a consistent manner each rehearsal so the puppeteers know how to move the plant puppet, Traver says. The puppeteers listen for “invisible cues” from Ramaley to put on an effective and cohesive performance.

“The idea is not to have a puppet and a voice,” Ramaley says. “You want that voice to come from the plant and for people to believe.”

The show also has a few "surprises" in store as the puppeteers want to keep things up to the imagination.

This is Ramaley’s first principal role in his second show with Theatre Lawrence; he held a minor role in 2012 production of “9 to 5: The Musical.” While he’s participated in a cappella and other singing groups in college, this is an entirely new experience away from his day job as a nurse anesthetist at Olathe Medical Center.

“The plant is horrible, evil and maniacal, and it’s kind of a fun departure from being a big, smiley, bumbly guy normally," Ramaley says. "It's quite a departure from the medical field."

Because his role is offstage, Ramaley says it provides for a good introduction to a large role. While he develops his own character, he gets to watch a group of people with “tremendous resumes” in theater develop their craft.

“You’d have to pay for acting classes like this,” Ramaley says.

The lead role of Seymour is played by Michael Dieker, who fell in love with the production when his older brother played Seymour in a high school production in 1998. It was one of the first musicals he’d ever seen.

With dreams of a career in theater from a young age, Dieker says he always loved the idea of a nerd as the hero.

“I liked rooting for a nerd,” Dieker says. “I identified with that as a kid whose interests were theater in a small community that was really into sports.”

Dieker, who is the assistant manager at Mariscos, has performed in several Theatre Lawrence productions, the last one being "White Christmas" in 2011. He also wrote and composed a full-length horror called “Femme Assassin Guy,” which was part of the “Fire Your Muse” new play festival at Lawrence Arts Center in 2012.

McKerrs says that in his extensive career, this is one of the best casts he’s ever worked with as a director.

McKerrs worked as an actor on Broadway in New York until moving to Kansas to run Topeka Civic Theatre for 10 years. He then opened his own theater and acted as artistic director of Theatre Pub at Ramada Inn in Topeka.

An advantage of working with a small cast is the specialized attention McKerrs can give to each actor, as they are all at different levels of training. And everyone is completely invested, he says.