Turn your bedroom into a sanctuary 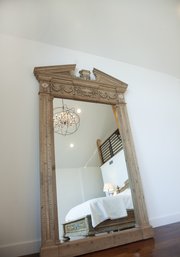 A large, floor-standing and wood trimmed mirror, reflects part of the remodeled master suite at the recently renovated Hawley home in west Lawrence. The renovation combined a mix of old and modern architecture.

A view from the artists loft into the wardrobe/dressing room space. Recycled wood beams were used as structural supper in the new addition. The Hawley family recently renovated their home to include a master suite and using a mix of old and modern architecture.

A view from the artists loft to the sleeping area below. The Hawley family recently renovated their home to include a master suite and using a mix of old and modern architecture. 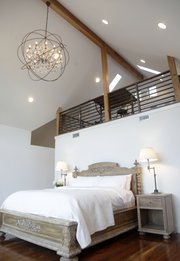 The Hawley family recently renovated their home to include a master suite and using a mix of old and modern architecture.

The Hawley family recently renovated their home to include a master suite and using a mix of old and modern architecture. The bathroom includes a steam shower, seen at left.

Artists loft. .The Hawley family recently renovated their home to include a master suite and using a mix of old and modern architecture.

If it were up to the kids, Nora and David Hawley's entire house would be covered in plastic toys, the Lawrence residents say. That's why when they were renovating their west Lawrence home, they made sure to include a place they could escape to: a bedroom sanctuary.

Nora and David have three boys, ages 5 and 3 years and 11 weeks old. When they had kids, they moved from their traditional master bedroom on the main floor into a small spare room upstairs to be closer to the boys. It was a haphazard lifestyle, using the room downstairs to get ready in the morning.

“It was sort of depressing,” David said.

The Hawleys worked with Struct/Restruct to renovate their home to include a master suite complete with high ceilings, a spa-worthy bathroom, meditation room, walk-in closet and personal studio space.

They refer to their bedroom as their own sanctuary.

It’s important to have a personal space to unwind away from the rest of the world, and that place should be your bedroom, said Dana Niemack, a feng shui interior designer. She specializes in the “power of intention” in relation to designing, removing any negative energy from home spaces, and bringing in positive energy to help promote a peaceful, calm environment.

“Think of your room as a getaway,” Niemack said. “You not only want it to look beautiful but also feel beautiful.”

Get rid of anything you feel obligated to keep (but don’t actually like) such as heirlooms or gifts, and eliminate things that make your mind race, Niemack said. Fitness gear sitting in the corner is a common mistake.

Declutter to keep everything clean and fresh, Niemack said. Keep nothing under your bed, she said, as it stifles energy flow throughout the room.

"And that negative energy travels directly up to where you're sleeping," she said.

The Hawleys, both design graduates from Kansas University, were strategic about creating a minimal aesthetic in their bedroom using light and space. Their shelves have a couple of photographs of their children, candles and a few decorative artifacts.

One giant ornate light fixture hangs from the ceiling as a statement piece.

“It’s got northern exposure so it’s got some good light coming in,” David said. “I think that makes you more relaxed than anything.”

It’s important to eliminate any electronics in the bedroom, Niemack said.

Get rid of the television; it’s worth trying, even if you’re hesitant at first.

If you share the bedroom with a partner and can’t compromise on moving the television out of the room, Niemack said, find a way to cover it up at night. Store the TV in a cabinet or drape some fabric in front of it before going to sleep.

It’s also best to keep the clock 5 to 10 feet away from the bed, Niemack said.

Position the bed so that when you sit up, the door is in plain view, Niemack said.

Closing the door at night before you close your eyes also makes you feel safe. Niemack admits she didn’t do this when her children were very young, but once she tried it, she felt much more relaxed.

A headboard provides us with a psychological feeling of extra support, Niemack said. Both sides of the bed should also be equal with matching headboards and lamps.

“Seeing balance, seeing that stability, it just makes you go, ‘all is well,’” Niemack said.

Appease all of the senses, Niemack said.

The Hawleys keep the walls white to bring out earthy, rich tones in the industrial steel pieces, wood furniture and hardwood floor, and to keep things open and light.

As a general rule, Niemack said, the skin tone of your forearm should be the color of your walls.

Niemack suggests natural fabrics for bedding like satin or silk. It’s entirely personal preference, but seek the materials that make you feel soft, warm and fuzzy.

Bringing in positive energy is as simple as bringing in the things you like, Niemack said.

The Hawleys chose to include a large steam shower in their bathroom as a “selfish” addition, create a meditation room, and at Nora’s request, custom-design a huge walk-in closet to adequately display her collection of vintage clothing and prized possessions from her stint in the fashion industry.

"It's our own adult space," David said. "We just shut the door and decompress."