David Vertačnik, a longtime KU associate professor, has 35 years of work featured in "Local Flavor," a show at the Lawrence Arts Center. 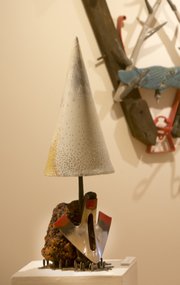 "Brace Up Now," by David Vertačnik.

Most sculptures are either botanical or figurative in nature, reflective of the world around him or the people in front of him.

“You’re a product of your environment,” Vertačnik said, explaining his approach. “You should be talking about what’s in front of you.”

Vertačnik’s mixed-media sculptures range from dining-table-centerpiece size to so large they arrived via flatbed trailer. Combinations of materials and abstract forms lean toward surrealism, the category Vertačnik said he’d land in if he had to choose.

“By employing unexpected juxtapositions in assemblage, objects become symbols that tell stories and create metaphors,” he says in an artist’s statement. “By using movement and a variety of materials — cast bronze, ceramics, found industrial objects, agricultural tools — my work becomes energetic and visually intriguing. It is descriptive, but allusive as well.”

Vertačnik, the grandson of Slovenian immigrants, grew up on a small farm outside Indianapolis.

Fond memories include his grandmother’s large garden and a junk pile behind the barn in which he discovered not junk, but fascinating shapes.

Vertačnik became an artist, obtaining a master’s degree at New York State College of Ceramics at Alfred University and going on to teach at Kansas University, where he is an associate professor of art teaching ceramics. He started teaching at KU in 1979.

But he did not leave farming behind.

Vertačnik grows apples and peaches, among other things, at Vertačnik Orchard at his home east of Lawrence.

Branches from those trees — either actual branches cut and polished or likenesses depicted in cast bronze — are among the found objects starring in his sculptures.

In a large wall pieced titled “Natural Selections” from 2002, pruned branches from Vertačnik’s apple trees radiate from a spinning ceramic disc, encased in a found object that looks like a fan cage and containing a cluster of tiny glass bottles filled with metal bearings that chime.

Among figurative pieces is one called “Brace Up Now” from 1988, inspired by a neighbor as he was dying of cancer. A slender tower of clay molded to look like clustered corks makes up the figure’s body; metal hooks and other found objects protrude.

The neighbor — who became a parent-like figure to Vertačnik and his wife, Wendy, when they moved away from their own families to Lawrence — was on his deathbed receiving morphine from his granddaughter when she began to break down. Vertačnik watched as he told his granddaughter, “brace up now.”

“That’s heavy duty,” Vertačnik said. “That kind of stuff sticks to you. Or at least it sticks to me.”

Ben Ahlvers, exhibitions director at the Arts Center, says “Local Flavor” shows Vertačnik’s willingness to explore different materials, and that it’s good to see that progress over a period of more than 30 years.