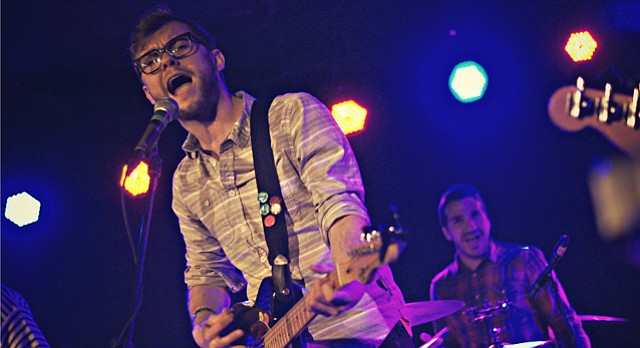 In the last year, Lawrence folk rocker Spencer Mackenzie Brown has gone from unknown to playing music festivals and opening for bigger touring acts like Augustana and The Delta Saints. Brown will be performing as part of Middle of the Map Fest on April 25.

At the beginning of 2014, nobody had really heard of Brown. He was just getting his feet wet in his music career. After years of watching one local band after another rule the vibrant music scene in Lawrence, Brown decided it was time to take action.

“I started going to local concerts and seeing local bands, and I really wanted to be a part of that,” he says, noting the fact that anyone from your friend to your neighbor was involved with live music. “Going out and seeing these bands and knowing that I knew them was really encouraging. It was possible. You can play this music; it’s not that far or inaccessible.”

So after a few experiments with musicians, Brown got a band together and began hosting showcases in his home with other bands who weren’t quite yet hitting the venues.

“People seemed to like what I was doing,” says Brown, whose home-recorded demos leaked and wound up getting airplay on The Voice of Lawrence. After hearing his song on the radio, he got picked up for an acoustic show at South by Southwest in Austin, Texas, last year.

In what seemed like the blink of an eye, crowds began taking notice of Brown’s infectious and catchy tunes, as well as his impressively booming voice. His first official Lawrence show after SXSW was on the Replay patio in May. He was then approached by two recording engineers (who happened to be in the wildly-popular band Hembree) about cutting an EP, which was released in July. By August, he was already playing Liberty Hall. After that, he started opening for major touring acts, such as Augustana at the Granada in December and The Delta Saints at the Bottleneck in January.

In March of this year, Brown celebrated his 25th birthday by returning to SXSW. But this time he had a full band in tow and a larger showcase scheduled. For someone who went from wistfully watching local bands and wishing he could join their ranks just one year ago, Brown was finding himself in one surprising Cinderella story.

Now, he’s scheduled to play Middle of the Map Fest in Kansas City, an event he’d only dreamed of attending up until now.

“When I heard about Middle of the Map Fest, I was not playing in this project. I hadn’t written these songs, but I did really wish that I was on one of those stages, and it seemed pretty unattainable to me,” Brown admits. “The previous year when I saw local bands get to do that, it encouraged me that this was possible. If you make good music and you worked hard, you could get there. So finding out that I’m playing a show, no matter what day or what time the show is, it’s a huge accomplishment in my mind. I saw it as near impossible, and now I’m doing it. It’s exciting for me, and it’s exciting for my band.”

Throughout his whirlwind of a year, Brown’s intentions have always been the same.

“I think in life we all struggle to search for these things that give us fulfillment. Throughout my teenage years and early 20s, that was a huge struggle. Finding not only what makes you happy, but what fulfills you and keeps you going every day so you’re not stagnant,” Brown says. “When I was 21, it became very apparent that working on music is what kept me from being stagnant, what kept me happy and moving forward. I have to keep doing this for myself because it’s the only way that I’ll truly feel fulfilled.”

You can see Spencer Mackenzie Brown continue his quest for fulfillment when he hits the Riot Room at noon April 25 as part of Middle of the Map Fest.