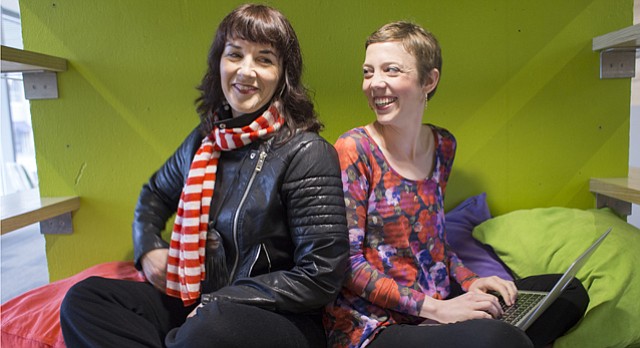 “What does it mean to grow up in the 21st century?”

That’s the tagline for the See/Saw Film Festival, April 24-26 at the Lawrence Public Library, which has an intriguing and distinctly different slant than other film festivals I’ve seen before. Once I saw the top-tier lineup of movies and read the description, it wasn’t a surprise to find that See/Saw is the brainchild of two Kansas University doctoral students: Maggie Beneke and Sorcha Hyland.

Roger Ebert once said “The movies are like a machine that generates empathy,” and the features, documentaries, and short films Beneke and Hyland have curated promise to embed viewers in the middle of adolescent experiences that are often under-considered. There’s more to childhood, after all, than the latest animated Disney fare, and wider perspectives can be truly enlightening. What’s more, each film will be followed by a 20-minute panel discussion aimed at starting conversation and digging into the themes of the festival. Did I also mention it's free?

I caught up with Beneke and Hyland, from KU’s department of special education, to talk about their hopes for this ambitious community festival, which they hope will be an annual event.

Eric Melin: In the press release, you said that the See/Saw Film Festival “challenges the status quo in how we imagine and perceive childhood and adolescence.” What is the status quo and how would you like to see it change?

Sorcha Hyland: The festival will present films that highlight childhood and adolescent experiences that are typically marginalized within mainstream film. For example, “Future Weather” features Perla Haney-Jardine as Lauradee, a Midwestern teen who is abandoned by her mother and takes survival into her own hands.

In our minds, there’s a dominant story of what is “normal,” what is “childhood,” and what is a “normal childhood.” And we all know that dominant story is only part of a bigger picture. We feel that dominant story can hurt children whose experiences aren’t a part of the narrative. The promise, resilience, creativity and strengths of these children are often ignored in mainstream representations.

The danger of the “status quo” story is that it has the power to influence how we organize our social worlds, to the exclusion of children and youth on the basis of race, class, (dis)ability, language, religion, gender, etc. The purpose of the festival is to expand this “status quo” narrative to include representations of all children, particularly those children whose stories are often silenced or ignored.

"Song of the Sea"

The See/Saw Film Festival runs from April 24-26 at the Lawrence Public Library. It is free to attend. There will also be an opening night special screening of the powerful Missouri-filmed documentary “Rich Hill” at 7 p.m. Friday at the KU Student Union’s Woodruff Auditorium. For information on all films and panelists in the lineup, go to seesawfilmfest.com/program.

Melin: Why is there a need for this kind of discussion, and why is film your medium of choice?

Issues like food insecurity are a reality for children and youth, not just in developing nations, but right here in Lawrence, Topeka, Kansas City, and across the state. What are we as a community doing to respond? We want to not only raise awareness, but to instigate conversation about these realities.

Hyland: Film reaches everybody. Film is a social and collective medium. It fuses together information, education and entertainment. As an audience member you enter the world on the screen, experiencing the emotions and reality momentarily and in a safe space, knowing that you can exit that world once the film ends.

Charlie Chaplin said, “We think too much and feel too little,” and we think this gets to the heart of why we are hosting a free, public film festival and not a formal seminar. Film allows audience members to empathize, and this empathy is critical in opening up a conversation about what it means to grow up in the 21st century.

Melin: Department chair Dr. Elizabeth Kozleski invited you both to curate this festival. What prompted her to do that? Does this idea dovetail with your studies?

Beneke: Dr. Kozleski definitely has influenced our approach to this festival. Her work theorizing systems change for equity and inclusive education has been internationally recognized. As our department chair and professor, Dr. Kozleski’s research and scholarship has informed the way we think about growing up in the 21st century. Prior to joining the KU community, she herself curated a film festival at the School for Social Transformation at Arizona State University.

We wanted to build on this legacy. As members of the leadership team in KU Professionals for Disabilities, a graduate student organization, this film festival is also a component of our doctoral service. We also feel, as members of the local community, that Lawrence is the perfect place to hold this event. The Lawrence Public Library is an ideal site for including everybody in the conversation.

Melin: What do you hope parents and kids get out of the festival?

Hyland: While several of our films and ancillary events cater to parents, children and youth, our films speak to anyone who cares about issues such as group identity, inequality, attitudes toward social policy, and social justice. In fact, the majority of our films speak directly to adult audiences.

Parents and children should certainly attend the screening of “Song of the Sea” on Friday, April 24, at 6 p.m. at the Lawrence Public Library. This is an Oscar-nominated animation from Ireland. It’s stunning. This event will center children’s perspectives, as we host a panel of local children discussing the film following the screening.

Beneke: There are multiple films and programs for children and youth, including a series of shorts written youth from Van Go, Inc. and produced by the Lawrence Arts Center’s Free State Festival outreach program under mentor Marlo Angell. We are also hosting a screenwriting workshop for teens and theater games for children.

Melin: You got a pretty amazing selection of critically acclaimed and local films. How did that come about?

Hyland: Our first move was to have coffee with Lawrence resident and KCUR film critic Cynthia Haines. Her advice was invaluable. We were determined to find films that were high quality and that spoke to our festival theme. We watched what was happening on the national and international film circuit.

We were particularly lucky to connect with Dr. Daniel Atkinson in the Kansas African Studies Center, who suggested we screen “War/Dance,” a cinematically spectacular documentary about the power of music and dance for young children living in a government protected camp in war-torn Uganda.

Dr. Tamara Falicov, chair of the department of film and media studies at KU, was also incredibly helpful in supporting our endeavor. Dr. Falicov actually screened one of our films, “Blood Brother,” at Liberty Hall last fall. This film, set in India, is absolutely beautiful and moved both of us to tears, so much so that we felt we needed to screen it again.

Beneke: We were careful about vetting the films for hidden stereotypes, and we solicited second opinions from a number of individuals on campus and in the community. But there were certain films that just hit us, straight off the screen.

When we discovered the film “15 to Life: Kenneth’s Story,” a documentary about 14-year-old Kenneth who is sentenced to life in prison without parole, we felt we just had to screen it, given the current conversation the disproportionate number of children and youth of color caught up in the criminal justice system in the United States.

It was also important for us to choose films that told stories of joy and hope — as in “Darius Goes West,” in which 15-year-old Darius Weems and 11 of his best friends set off across America with the ultimate goal of getting his wheelchair customized on MTV’s “Pimp My Ride.”