Watch out, Lawrence: A riptide is bringing a boatload of comedians to town this weekend.

Local comedians Rob Schulte, left, and Michael Pope run through a skit April 16 at the Reply Lounge, 946 Massachusetts St. Schulte, a member of Harpoon Presents and host of the weekly "Good Time" showcase, will present a special "Good Time" to kick off this weekend's Harpoon Presents' Riptide Comedy Festival Thursday at the Replay Lounge. 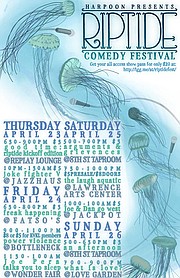 Festivities officially begin with a special edition of “Good Time,” the local comedy collective’s weekly showcase, from 6 to 9 p.m. Thursday at the Replay Lounge, 946 Massachusetts St.

This year’s Riptide bears little resemblance to its first incarnation, says Zach White, the principal organizer behind the four-day festival.

“I think the philosophy behind this year’s planning of deliberately mixing east and west adds an additional layer to it,” White says.

“It’s the concept of these huge waves of people coming in from the coasts and washing over Lawrence.”

While the original Riptide featured mostly local comedians, this weekend’s schedule skews toward comics who have built careers in major markets on the coasts but have yet to become household names nationwide.

“A lot of comedians recycle the same stuff. They’re all just like, 'Oh man, Tinder. Dating's hard. I don’t like my job.' It’s kind of boring,” White says. “These guys have interesting perspectives."

Unlike other comedy festivals that allow submissions from potential performers, Riptide’s organizers already had some names in mind when they began the planning process last year.

Anticipating the added expense of travel and lodging for out-of-town performers, Harpoon Presents turned to crowdsourcing to make the festival happen. The group’s Indiegogo page has raised just over $2,000 so far, reaching its goal last week.

White says Riptide is following a wave of “DIY” comedy festivals that have emerged in recent years, citing the Omaha’s Crom Comedy Festival and The Comedy Exposition in Chicago.

The Lawrence comedy scene has experienced some growth since White returned here in fall 2013 after spending a couple of post-grad years working as a journalist in Montana and New York City.

White first founded Harpoon Presents as a Kansas University student in 2008, but never had much time to devote to the group in his college days. That changed when he moved back to Lawrence and introduced the scene to the comedy infrastructure he observed in New York City.

Now, with more opportunities for local comedians to shine, “we are possibly the best city for comedy between Chicago and Denver,” White says.

And with all the coastal comics streaming into town this week, White hopes Riptide will prove that to the rest of the country.

“I think Lawrence itself is a big contributor to that,” he says of Riptide and what makes it special. “I think this is a weird town full of very creative people who are unusually suited to supporting creative endeavors like this one.”

For more information about the events, including tickets and a full schedule, visit www.riptidefest.com.

Here are the events comprising this weekend's Riptide Comedy Festival. A pass for all 10 events is available for $20 on the festival's Indiegogo page Cover charges for individual events vary: