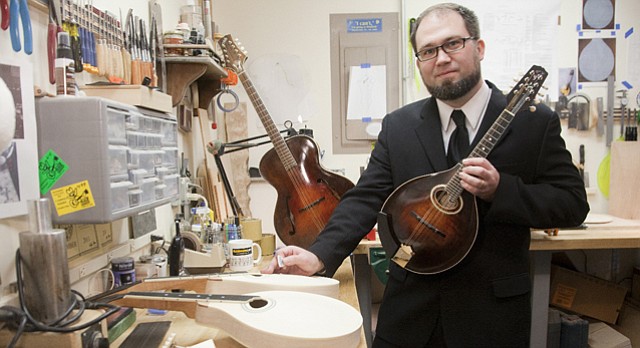 Ask Mike Black what brought him to Lawrence in 2000, and he’ll tell you.

Black, 42, was in his mid-20s when he packed up and left his hometown of Salina to follow his then-girlfriend to Lawrence.

The relationship didn’t last — they broke up shortly after the move, Black says — but his love affair with Lawrence and its music scene has held steady.

More than a decade later, he’s still in town, and for the last year, has earned his living handcrafting mandolins out of his garage. It’s a full-time gig, says the former call-center worker, who receives about 10 to 15 orders per year.

Black is part of a large, active community of mandolin enthusiasts who make their home in Lawrence. This town, it turns out, is something of a mandolin mecca.

“We’re everywhere. You’re always surprised to learn your neighbor plays the mandolin or your mailman plays the mandolin,” says Black, who first picked up the instrument as a teenager and plays locally with the band Three Bean Salad (of which Journal-World chief photographer Mike Yoder is also a member). “There are a lot of us that seem to come out of the woodwork.”

As to what, exactly, attracts so many Lawrencians to the lute-like instrument, Black says he’s not sure. But its presence here — as well as a more general interest in acoustic music — is tangible, thanks largely in part to the mandolin pioneers who first put Lawrence on the map in the 1970s. 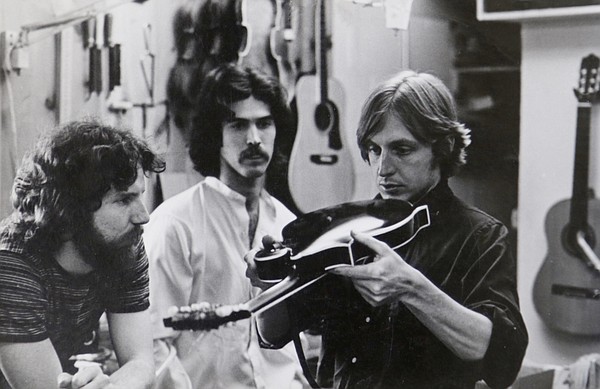 From left then-Michigan Street Music co-owner Greg Smith, mandolin builder Jim Triggs and MSM co-owner Jim Baggett, look over a mandolin made by Triggs in this photo from around 1979. Baggett is now owner of Mass Street Music and Triggs owns and operates Triggs Mandolins & Guitars with his son Ryan. by Courtesy of Jim Baggett

'Bulls-eye of the bluegrass scene'

Jim Baggett, 66 and the longtime owner of Mass Street Music, is a veteran of the scene.

“Because of this culture that started back in the 1970s, there’s a whole acoustic musical-instrument culture in Lawrence that has moved from generation to generation,” Baggett says. “A lot of times, all it takes is just a few players who are dedicated to the instrument, and it all flows from that. It’s the people who make it.”

Like Black, Baggett was also drawn to Lawrence’s thriving folk-and-bluegrass community, which back in 1976 was just starting to gain steam.

Baggett credits luthier Steve Mason for laying the first seeds around 40 years ago, when the former Winfield resident along with his partner, Brian McKinney, opened Off the Wall Hall in the downtown space now occupied by the Bottleneck at 737 New Hampshire St.

The music venue and instrument shop became a regional “hub” for bluegrass and folk music, in time attracting musicians like 59-year-old Jim Triggs, who cites both Baggett and Mason as mentors in his younger days.

Instrument builder Jim Triggs and mandolins by The Lawrence Journal-World

Triggs, who made mandolins for Gibson in Los Angeles and Nashville before eventually returning to Lawrence with his family 11 years ago, now runs his own luthier shop out of his garage, building guitars, mandolins and ukuleles with his son Ryan.

“Back in the '70s, people from Kansas City and Topeka and Emporia used to come to Steve Mason’s shop on Wednesday nights for the jam session. That was the bulls-eye of the bluegrass scene within a three-hour radius,” Triggs says. “The same bands you’d see at Winfield (Walnut Valley Festival) would be coming through Lawrence to Steve’s shop.” 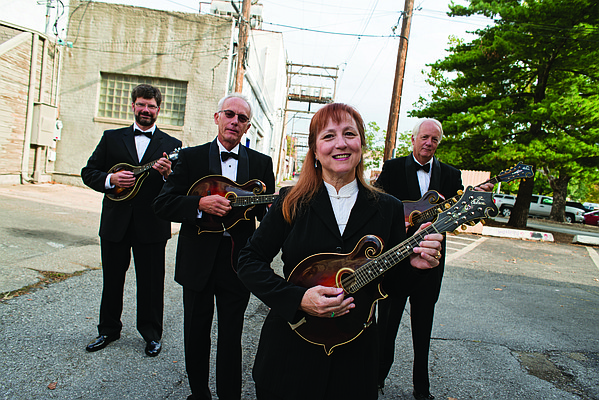 The Lawrence Uptown Mandolin Quartet is pictured in 2013 before the group's 40th anniversary. Members, pictured from left, are Mike Stewart, Charles Higginson, Beth Dearinger and Jeff Dearinger. During its existence, group has included as many as 30 musicians at one time.

In 1973, a few years before Mason’s arrival, a local musician by the name of Jeff Dearinger had founded an ensemble that would eventually become the Uptown Mandolin Quartet. The group, which at one point was considered a full-blown mandolin orchestra with upward of 30 members, is still active today.

In 2013, its current members — Jeff Dearinger and his wife, Beth, with Mike Stewart and Charles Higginson — celebrated the ensemble’s 40th anniversary.

The Kansas State Fiddling and Picking Championships, which will be held Aug. 23 in South Park this year, began as a countywide contest in 1976. Since 1981, the competition has welcomed musicians from across the region, many of whom have gone on to place in the national contest held each September at Winfield’s Walnut Valley Festival.

The mandolin scene continued to grow over time, and by the 1990s, Lawrence was beginning to draw national attention. 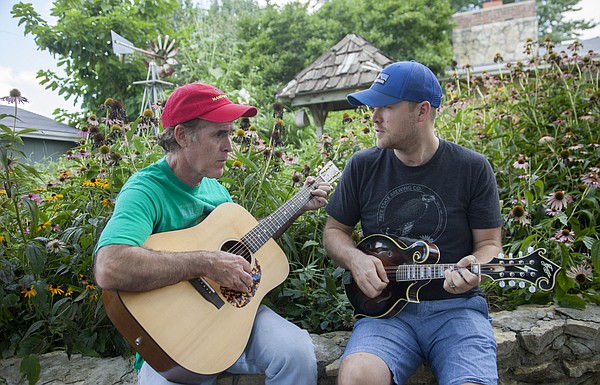 Jim Triggs and his son Ryan play on their handmade Triggs guitar and mandolin outside their Lawrence home. Jim worked with Gibson for several years helping build mandolins and archtop guitars. Triggs' mandolins have been played by some of the top bluegrass musicians in the country. by Mike Yoder

In 1993, the Dearingers, along with fellow musician Scott Tichenor, founded Mandofest. The Lawrence-based mandolin festival started out modestly enough, but by the end of its run in 2005, Mandofest had grown into a two-day event complete with workshops, concerts and jam sessions, attracting mandolinists from all over the country.

Tichenor, 61, is also responsible for Mandolin Café, a Lawrence-based website launched in 1995 that includes forums, classifieds, music, a luthier directory and other resources for mandolin enthusiasts.

Ryan Triggs quickly and confidently points the site out as the biggest of its kind. Tichenor is more modest about it, but even he can’t ignore the numbers.

“Within a few weeks, I was getting 250 to 500 visitors a day,” says Tichenor, who at the time was working as a freelance IT professional. “It grew exponentially, and it grows a bit every year. Now, I get something like 30,000 unique visitors daily.”

Mandolin Café was originally something of a side project for Tichenor, who continued to work developing Web content for institutions like the Kansas University Medical Center and Park University until about six years ago.

By that point, the website had begun generating enough revenue to allow Tichenor to take it on full-time. He’s never looked back.

Since moving to Lawrence in 1984, Tichenor has become a leader in the local mandolin community. It’s a special place that by his estimate has more mandolin players and builders than Kansas City, easily. 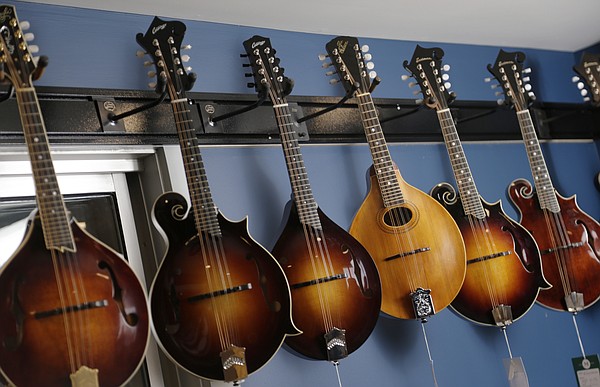 New and vintage mandolins, in both A- and F-style, for sale are pictured at Mass Street Music in Lawrence. by Mike Yoder

And, what’s more, they all seem to know each other. As Jim Triggs tells it, “I’ve known a lot of these guys over 40 years… and we’re all still friends.”

Unlike his father, Ryan Triggs didn’t migrate to Lawrence as a young man seeking entry into the local music scene — he was born into it.

And while Jim’s work never interested Ryan much growing up — “no matter what your dad’s job is, it isn’t cool,” he now recalls — he’s since developed a profound “respect and appreciation” for the craft, which he took up after high school.

Ryan says he’s “proud” of the business he’s built with his father — they've made instruments for artists like Aerosmith, Alan Jackson, the Steve Miller Band, Jimmy Buffet and Luke Bryan, just to name a few.

At 33, he thinks mandolins are pretty cool. So are the local folks who love them.

“It’s just a good group of people to be around — everyone’s really approachable and fun,” Ryan says. “I’ve grown up around these people. It’s all I know, really. We’re like a big family.”

Mandolins haven't always been as popular in Lawrence as they are today, as this article from the Aug. 5, 1890, Lawrence Daily Journal proves: 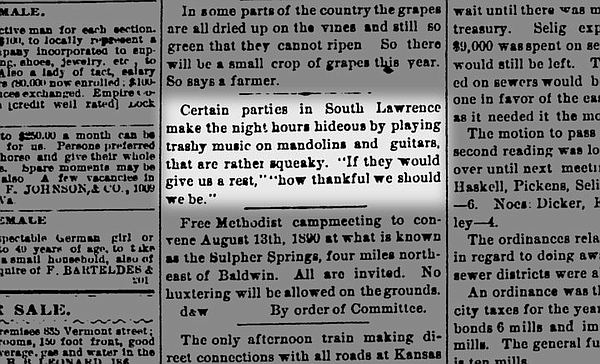 The roots of Lawrence's mandolin culture go way, way back — all the way back to the Aug. 5, 1890 edition of the Lawrence Daily Journal, apparently. This amusing report, suggested by Scott Tichenor and unearthed through the sleuthing of Journal-World web editor Nick Gerik, denounces mandolin music as "trashy." One can only imagine what 19th-century Lawrencians would think of today's Top 40.