If you don’t consider yourself a fan of country music, it may be time to take a fresh look at the genre.

You just might be surprised, says Kirsten Paludan, whose nine-piece country band, Starhaven Rounders, is headlining the Lawrence Arts Center’s production of “Cowboy Cabaret” this weekend.

Billed as a “honky-tonk variety show,” the two-act performance will blend toe-tapping renditions of classic songs (with a few original tunes thrown in) and comedy in the tradition of “Hee Haw" and “The Porter Wagoner Show.” 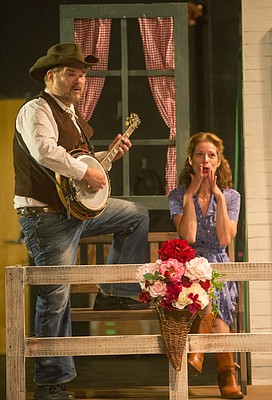 Ric Averill and Kirsten Paludan are pictured on the set of the Lawrence Arts Center's upcoming "Cowboy Cabaret." The honky tonk variety show, slated for Saturday, Aug. 22, at the Arts Center, is the original creation of Paludan and her Starhaven Rounders band, who will host and perform as the show's in-house band. Averill and his wife, Jeanne, will also perform in the show.

“A lot of people like old-school country music and don’t even know it,” says Paludan, who developed "Cowboy Cabaret" with her bandmates at the Arts Center’s request. “We experience this all the time, whenever I’m with the Rounders. We play in Kansas City once a month, and people will come to us saying, ‘I didn’t think I liked country music, but I heard you guys playing it and now I’m on board.’”

Paludan, who grew up in Lawrence and studied English literature at Kansas University, can relate. Country music, she admits, wasn’t part of her family’s musical repertoire.

Cost: Tickets are $10 for regular seating and $40 for VIP seating, which includes a VIP reception with the cast before the show and a swag bag. Tickets can be purchased online at www.lawrenceartscenter.org, at the Arts Center box office or by calling 843-2787.

But she does remember watching a few episodes of “Hee Haw” as a kid. Her production — which also features performances from Jeff Stolz of Drakkar Sauna, Tess and Maria Cuevas of Maria the Mexican, and Foxy by Proxy burlesque troupe founding member Scarlet Harlot, to name a few — calls back to the Southern-fried comedy show while remaining firmly in the 21st century.

“It’s paying homage to the classics but with an update,” Paludan says of “Cowboy Cabaret.”

Unlike “Hee Haw,” the Arts Center’s production will feature more topical humor, poking fun at Lawrence-centric topics like the current state of Kansas politics, for example.

Ric Averill, the Arts Center’s longtime artistic director of performing arts, will provide much of the show’s comedic bits with his wife, Jeanne, between musical performances.

He boasts some pretty impressive ties to country-western royalty — if only through Jeanne, who grew up in northwest Arkansas and just happens to be a distant cousin of legendary country singer Porter Wagoner.

“When I was in college playing the classical violin, I went down there to visit her family,” Averill recalls from the set of “Cowboy Cabaret,” a four-string banjo resting in his lap. “Her uncle said to me, ‘You know what that is? That’s a fiddle. You should really play that.’ So, he taught me to play some fiddle tunes.”

Averill, who describes the Arts Center’s production as “the Grand Ole Opry, Lawrence-style,” says the “Cowboy Cabaret” should appeal to older folks who grew up listening to its timeless tunes as well as newcomers to the country genre.

While sticking mostly to “the classics,” a few performers will showcase original material or, in the case of Jeff Stolz, rework “Mountain Woman” by the Kinks into a country-western song.

Even the least country-savvy out there will probably recognize songs on the program, Paludan says. Right now, that includes selections from Johnny Cash, George Jones, Patsy Cline, Willie Nelson and “You’re the Reason Our Kids Are Ugly” by Conway Twitty and Loretta Lynn — that last one should “give you a sense of the tone” of “Cowboy Cabaret,” Paludan says.

She’s particularly excited about the all-female performance of “Didn’t Leave Nobody But the Baby,” a haunting lullaby made popular by the 2000 film “O Brother, Where Art Thou?”

Toward the end of the show’s second act, the women will gather on stage to sing the song a capella, Paludan says.

“Just thinking about it gives me shivers,” she says. “I can’t wait to see that.”