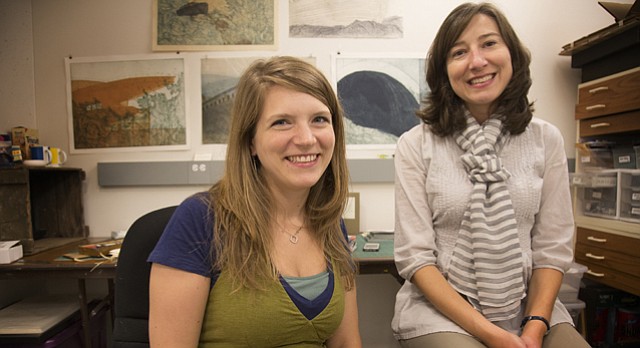 From left, printmaker Amanda Maciuba and ceramicist Christy Wittmer are artists in residence at the Lawrence Arts Center for 2015-16.

Those poking around the Lawrence Arts Center in recent weeks may have noticed a couple of unfamiliar faces in the building's ceramics and printmaking studios. The center's 2015-2016 artists-in-residence moved into their studios earlier this month and will soon begin teaching classes, taking part in community-outreach projects and creating new work in Lawrence.

Kyla Strid, director of residencies and adult education, was in their shoes not too long ago. She participated in the Arts Center's 2013-2014 ceramist residency program before taking on her position after her stint ended.

She says she's already impressed with current residents Amanda Maciuba and Christy Wittmer, who practice printmaking and ceramics, respectively. The pair were chosen out of 40 other applicants for the residency.

"They’re excited to be here, they’re excited to be part of the community and they’ve more than risen to the occasion," Strid says. They just gave their artist talks to the staff this week, and they just blew everyone away. They were thoughtful and poetic in how they talked about their work, and really open and honest, too."

"I can't wait to spend the next year getting to them," Strid says of Maciuba and Wittmer. 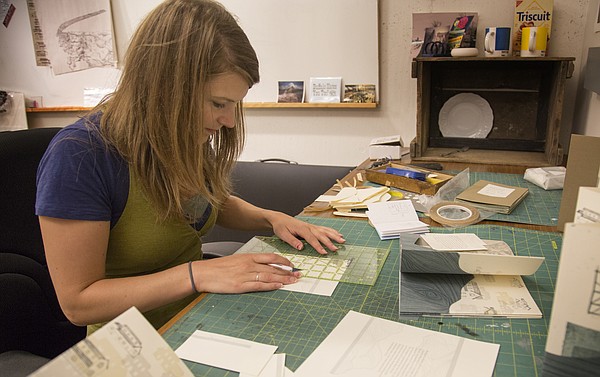 Amanda Maciuba, works in her studio at the Lawrence Arts Center, where she is the 2015-2016 printmaking artist-in-residence. by Richard Gwin

By the time Amanda Maciuba arrived in Iowa City to attend graduate school, the college town was already four years removed from a 2008 flood that damaged nearly 800 homes and 260 businesses within city limits and the encompassing county.

The University of Iowa’s Arts Campus, where Maciuba would eventually earn her master’s degree in printmaking, was particularly devastated, forcing faculty and students, including Maciuba, to carry on in temporary classrooms. 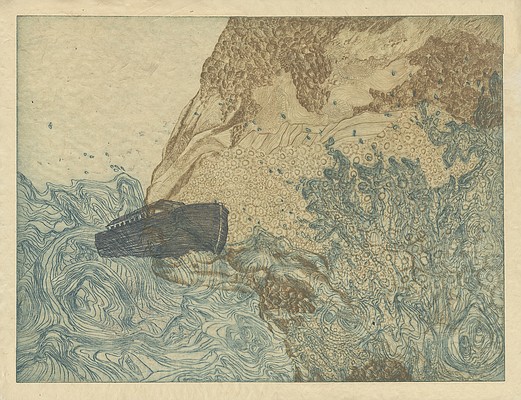 Untitled (Here I) by Amanda Maciuba. 2015. Intaglio and monotype.

As abandoned homes were being torn down and new buildings going up, the experience went on to inform a series of prints that Maciuba says explore how humans “respond to national disasters and climate change.” It’s a common theme in her work, which has been largely influenced by her childhood in suburban Buffalo — a city that, once a thriving industrial hub, has in recent decades slipped into economic stagnation and population decline — and time living in the Midwest.

The works, which evoke biblical imagery like Noah’s Ark and the flood from the Book of Genesis, also capture the ultra-modern architecture of the rebuilt Hancher Auditorium. Maciuba says the performing arts hall was rebuilt a mere 100 yards away from its original location on the banks of the Iowa River. 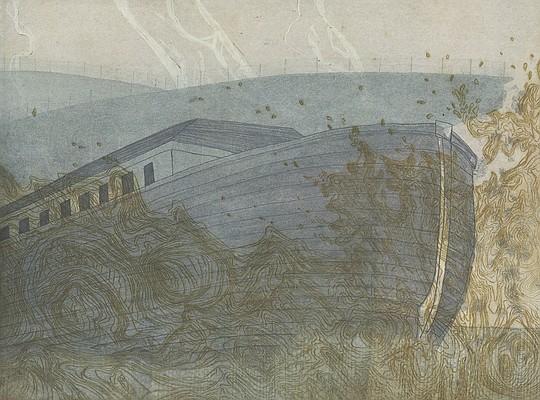 In Lawrence, the printmaker plans on researching efforts to restore Kansas’ remaining prairie, sustainable agriculture such as strip farming and how local folks are developing new methods to prevent runoff pollution and flooding.

Since her time in Iowa, Maciuba has fallen in love with the Midwest, and she is excited to continue her stay here.

“The Midwest just has such a wide spectrum. I also think it’s an area that’s taken for granted,” Maciuba says. “It just seems to exist, though it provides food for the entire country and fuel and all this other stuff, but there are all these interesting things happening — good and bad — that I think more people should be exposed to.” 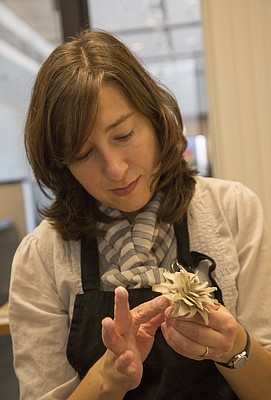 Christy Wittmer, the 2015-2016 ceramics artist-in-residence at the Lawrence Arts Center, works on a clay flower in her new studio. by Richard Gwin

As a young girl growing up in Lima, Ohio, Christy Wittmer liked to busy herself with outdoor pursuits — digging around in the dirt and pulling apart plants were the big ones, Wittmer recalls.

Decades later, she still enjoys getting her hands dirty, though these days you’re more likely to find the ceramicist in her Lawrence Arts Center studio than the backyard. 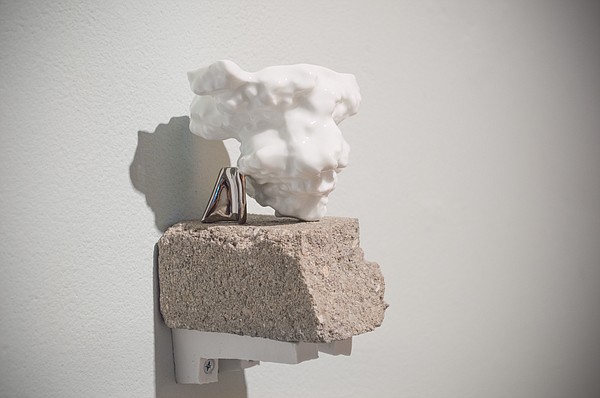 “I want to engage the viewer’s experience in their own body,” says Wittmer, whose sculptures often feature precariously stacked objects topped with delicate porcelain. “Like, wanting to get close to a piece but not wanting to knock it over — it’s this push and pull. So, the viewing becomes more of a full-body experience.”

Wittmer, 41, worked as a massage therapist for a couple of years between earning her bachelor’s degree in painting and sculpture from Miami University in Ohio and completing her graduate studies in ceramics at the University of Cincinnati.

Though she’s no longer practicing, aside from the occasional back rub for friends and family, Wittmer says her fascination with human anatomy continues to manifest itself in her work.

Her mixed-media sculptures, which sometimes resemble a “pile of stuff” (her words) from far away, are intended to provoke a physical reaction from the viewer. Wittmer’s process sometimes involves the curation of objects with the kinds of details — a subtle fingerprint left behind; a foaming glaze that creates an uneven, craggy surface resembling coral — that might motivate someone to take a closer look.

Wittmer also draws from her one-year stint as a glaze chemist at Cincinnati’s Rockwood Pottery, which involved mixing compounds to create different glaze effects. Her current work involves plenty of “experimenting and tinkering around,” just like she did in the lab.

That’s how she likes it.

“What interests me about my work is that it inspires the viewer to have their own kind of creative imaginings about what’s going on there,” Wittmer says. “I feel like pushing materials outside of what you see every day allows more of that to happen.”