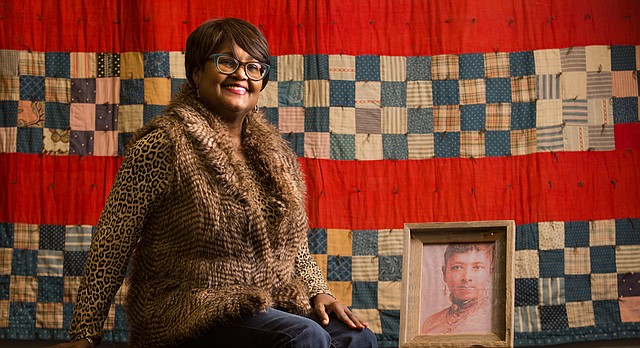 Lawrence quilt artist Marla Jackson is pictured before an 1890s quilt from an unknown artist at the African American Quilt Museum and Textile Academy, 2001 Haskell Ave. Jackson recently received a grant from the Kansas Creative Arts Industries Commission to renovate the museum space. Next to Jackson on the bench is a framed portrait of Maria Rodgers Martin, who was born a slave in 1831. Quilts made by Martin will be rotated through the museum.

The African American Quilt Museum and Textile Academy may be small, but its founder and curator, Marla Jackson, has big plans for the unassuming room tucked away on the second floor of Independence Inc., 2001 Haskell Ave.

Jackson, along with her students at the textile academy, has been researching the story of Maria Rodgers Martin, a slave who was abducted from a Missouri plantation by Union soldiers during the Civil War and brought to Lawrence, since 2012.

Earlier this month, Jackson announced what she recognizes as the culmination of those efforts: In 2017, Lawrence will host the first-ever National African American Quilt Conference, a citywide event in celebration of the history and legacy of the African American quilting tradition.

“This is the dream,” Jackson said of the conference, which will tentatively include workshops, keynote speakers from the quilting world and several exhibitions sprinkled throughout the city. “My vision would be having all of these artists coming to Lawrence, being in South Park, working with our local artists, mentoring and vending, spinners and weavers — black and white — coming together to collaborate.”

She’s currently in talks with several potential partners, among them the City of Lawrence, Explore Lawrence, Downtown Lawrence Inc., the Lawrence Arts Center, the Lawrence Public Library, Watkins Museum of History and, notably, the Spencer Museum of Art, where she hopes to display a 67-quilt exhibition curated by world-renowned quilter Carolyn Mazloomi.

Taking a cue from Rachael Perry’s Lawrence Inside Out project, which saw the installation of hundreds of black-and-white photographic portraits in locations across Lawrence, Jackson wants to see “every window in Lawrence (filled) with quilts.” 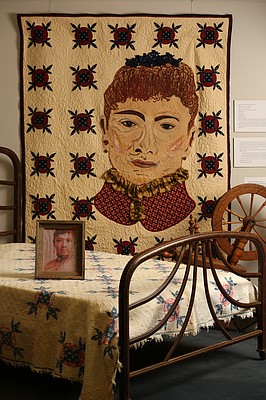 A portrait of a slave Maria Rodgers Martin, born in 1831, sits on a bed that is made with one of her quilts, Dec. 15, 2015, at the African American Quilt Museum and Textile Academy, 2001 Haskell Ave. Behind the bed on the wall hangs a quilt, "A Tribute to Maria Rodgers Martin" made as a collaborative effort by artists Marla Jackson, Tonia Johnson and several students. by Nick Krug

Jackson also hopes to partially recreate the fireplace mantle and walnut floors of the slave living quarters at Missouri’s Wayside Rest Plantation, where Maria Rodgers Martin lived before her capture and relocation to Lawrence.

“We want to recreate it because her spirit is here,” Jackson said. "She lived in Lawrence, Kansas, for 40 years. Her daughter was left here and she had a grandchild here. The story is alive."

An additional $3,398 grant from the Kansas Humanities Council earlier this month will help fund her “From Slavery to a Free State: The Story of Maria Rodgers Martin” research project, which she hopes to expand with more public talks and historical interpretations by her textile-academy students.

Seven students aged 8 to 17 are enrolled in Jackson’s program, which she sees as a vital component of sharing the story of Maria Rodgers Martin and other historically important African Americans who called Lawrence home.

In preparation for 2017’s convention, Jackson and her students are working on a quilting project that will incorporate the natural elements (leaves, insects, rocks) slaves encountered on the Underground Railroad — “we’re going to take that all, tie it up and dye the fabric,” Jackson said.

She thinks there’s a lot we don’t know about our city’s past, and she hopes a more concentrated effort to highlight the role of African Americans in shaping Lawrence will bring some of that past to light.

“There’s what I call history, and then there’s real history,” Jackson said.