Margaret Atwood is taking over Lawrence. The renowned and activist will deliver the Kenneth A. Spencer Memorial Lecture at 7 p.m. Monday at the Kansas Union Ballroom, followed by a reception and book signing.

Artists celebrate love of all kinds in annual Percolator show

With Valentine’s Day on the horizon, the Lawrence Percolator is hosting a show that celebrates devotion in all its forms. This year’s exhibition, The Love Show, is the Percolator’s third based on that theme. It opened during January’s Final Friday and will run until Feb. 22.

The Kansas University School of Music will conclude its Prairie Winds and inaugural Sunflower Strings festival with a concert Sunday at the Lied Center.

Today in Lawrence: Talking about books and a new police HQ

Today in Lawrence: Another City Commission listening session, an acclaimed author will be at The Raven and winter reminds us it's still winter. Happy Kansas Day!

Kansas University's Wind Ensemble, Jazz Ensemble I and Symphony Orchestra will share the stage Saturday for a special concert at the Lied Center of Kansas, 1600 Stewart Drive.

Off the Beaten Plate: Quinoa and sweet corn fritters at La Parrilla

Quinoa has a bit of a reputation as a health food, a favorite among hippie types and fitness buffs for its high levels of protein and fiber. It's gluten-free, and not really associated with heavy fried dishes.

Describe your style: I would say it’s kind of like the “1970s meets the thrift store.”

Fashion trends you hate: Neon colors are killing me.

Final Fridays returns post-holidays with an eclectic mix of events. From love-centric art to ceramics to free massages, this Final Friday has something for everyone.

Author Jamie Quatro to give reading at The Raven

Author and former Lawrence resident Jamie Quatro will give a reading from her acclaimed book of short stories Thursday at the Raven, 6 E. Seventh St.

More than 500 handmade ceramic bowls produced by area artists, community members and Lawrence Arts Center students will be up for sale at this weekend's Souper Bowl Saturday.

Now that the first month of the new year is about over, lots of us have abandoned those pesky healthy-eating resolutions and returned to our favorite comfort foods. 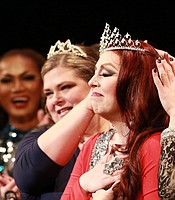 Today in Lawrence: Monkey around at the Lied Center

Critter Buzz: Resolve to get your pet a yearly checkup

It is time of the year to make resolutions for the new year. Pet owners’ resolutions should be to make sure that their pet gets a checkup with a local veterinarian each and every year.

Brittany Keegan is standing opposite a massive quilt that hangs from the wall of a sun-drenched room on the second floor of the Watkins Museum of History.

With a new streetcar line currently being installed and dozens of new development projects in the works, the downtown development boom is already well underway.

The Baker University Community Choir will begin rehearsals for its spring season Thursday.

Following President Obama’s State of the Union address last week, organizers with the U.S. Department of Arts and Culture will host events across the country through the end of the month that they’re collectively calling the “People’s State of the Union.”

Off the Beaten Plate: Halum cheese at Aladdin Cafe

We've never met a cheese we didn't like, and the Halum appetizer at Aladdin Cafe (our first experience with the variety) was no exception.

Today in Lawrence: President Obama will be in Lawrence today to give a speech on the KU campus.

“Kiss the Fish,” the latest production from New Zealand’s Indian Ink Theatre Company, tells the tale of a young monkey named Sidu who dreams of escaping his home on a small South Asian island to become the next Freddie Mercury.

Fashion trends you love and hate: I really love boots as with leggings but I really hate leggings as pants! I don’t think they’re real pants.

Whom do people say you look like? I’m not sure. Hopefully, someone cool. 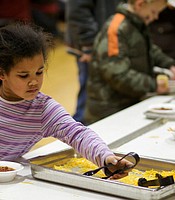 Today in Lawrence: Get your tickets to see the president

Get your tickets for Obama's Lawrence visit, and the community comes together to celebrate Martin Luther King Jr.

Today in Lawrence: MLK Day closings and warm temperatures for your Monday!

Innovative. Collaborative. Dynamic. Those words describe the ideas organizers hope to showcase at an upcoming TEDxLawrence conference, the city’s first, slated for March 23 at Liberty Hall. By Joanna Hlavacek

When considering a paint project, choosing the right color may be the most difficult part of the job. A few simple steps can make the process a little easier.

Traditions Night, August 2013: It had been nearly 14 years since Christopher Enneking’s last game at Kansas University’s Kivisto Field, where he played offensive lineman for the Jayhawks from 1995 to 1999. That night he had returned not to play football but to recite a poem to incoming freshmen. By Joanna Hlavacek

Nina Friesen, a senior at Lawrence High School, has won best of show in the "Kansans...As Talented As You Think!" art contest. Sponsored by the Native Sons and Daughters of Kansas, the annual competition honors the work of high school students.

Kansas City Connection: A slice, a symphony and opera singing

Last week, this column previewed KC Restaurant Week, which began Friday and lasts through Jan. 25. Sometimes you just want to keep it simple, though, and just order a pizza. Also, mezzo-soprano superstar Joyce DiDonato and tenor Juan Diego Florez will headline the pinnacle event of the Harriman-Jewell series’ 50th season.

The Kansas Humanities Council has awarded seventeen organizations with "The Things They Carried Home" grants totaled at $14,420, which support preservation projects and workshops related to veterans and military service.

Insects likely find your home as inviting as you do, and the various species of moths and beetles that enjoy plant materials may also make their way into your kitchen.

Today in Lawrence: Warmer weather arrives in time for the weekend

Today in Lawrence: A welcome relief from winter cold, and the catch of the day for a good cause.

What's in a name? Theatre Lawrence to debut 'Vanya and Sonia and Masha and Spike'

This weekend, Theatre Lawrence will debut its production of "Vanya and Sonia and Masha and Spike," a Chekhov-inspired Tony Award-winning play.

Off the Beaten Plate: Mochi ice cream at Encore Cafe

This frozen treat is like two desserts in one — soft, gelatinous mochi (a Japanese pounded rice cake, for the uninitiated) on the outside and a scoop of ice cream on the inside.

Tell us a secret: Tax collectors really do care. They do have hearts.

Fashion trends you love: I love high-waisted jeggings. I own three pairs. I love the stretchiness!

Cooking From Scratch: Popping up for movie night

Stovetop popcorn takes about the same amount of time of microwave popcorn and tastes much better. You don’t need any special equipment to make it either.

Wood-burning stoves require a tight seal around their door for optimal efficiency. Replacing a worn-out fiberglass gasket is an important part of stove maintenance.

A bit of advice: Don’t look at the website for Kansas City Restaurant Week on an empty stomach.

The winners of the 2015 Langston Hughes Creative Writing Awards — and a $500 prize — are poet Alyse Bensel and fiction writer Matthew O'Connell. Co-sponsored by the Raven Book Store and the Lawrence Arts Center, the awards honor two writers who continue Hughes' tradition of portraying life experience through poetry and prose.

Spencer Museum to host Rocket Grants event, Lawrence Inside Out

Artists interested in applying for a Rocket Grant — a program that supports innovative projects outside traditional art venues — are invited to attend a launch and review event at the Spencer Museum of Art from 3 to 4:30 p.m. Jan. 18

This week, an art exhibit featuring works from some of the area’s most prominent artists will be held to celebrate Pachamamas Restaurant and Star Bar.

Final round of portrait sessions set for community photo project

Off the Beaten Plate: Hercules Burger at The Mad Greek

If you've ever bitten into a hamburger and thought to yourself, "This could really use more meat," the Mad Greek's Hercules Burger may be the meal for you.

Describe your style: Casual, whatever is comfortable and that’s swell — I’ll pretty much put that on my body.

Fashion influences: I hate to say this — it was probably “Doctor Who” to be honest (The Seventh Doctor). Then it just kinda bloomed after that…

You'd be hard pressed to find a kid who doesn't go crazy for macaroni and cheese or a plate of chicken tenders. But, as those kids grow up, so do their taste buds. But just because we grow up doesn't mean we have to abandon the culinary treats we enjoyed as kids. 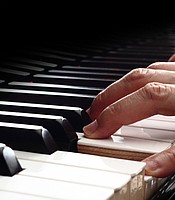 Today in Lawrence: Brace yourselves for the extreme cold before you go to a concert or basketball game

Today in Lawrence: Brace yourselves for the extreme cold before you go to a concert at Lawrence Arts Center or to watch basketball at Liberty Hall. 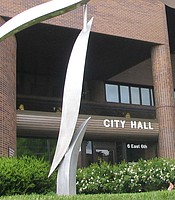 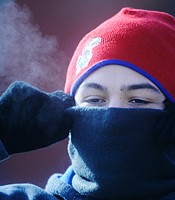 Kansas City Connection: Resolving to have a happy new year

A positively framed list of New Year’s resolutions that will help you gain in fun, healthy and culturally enriching experiences

“Here it is,” says Luella Vaccaro, making her way down a dark, narrow staircase to the basement of her Lawrence home. She flips a switch, casting light over the workbench where her late husband, artist and former Kansas University professor Nick Vaccaro, produced some-130 mixed-media dioramas from the late '60s to the mid-'90s.

Behind the Lens: Bring old photos into the digital age

Have old photographs you’re looking to bring into the digital age? Here’s how to do it yourself.

The Lawrence Percolator is now accepting entries for its annual love-themed art show.

The arrival of a new year for many people means making goals for personal and professional improvement. For gardeners, here are a few ideas for the resolution list. 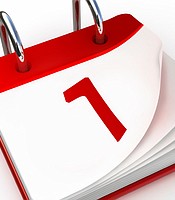 Today in Lawrence: Today will be a warmer day; city, county offices closed as well as other agencies; music at American Legion

Fashion trends you love: I really like the monochromatic trend. It’s usually all black, which sounds kind of gothic. But, I think it can also look kind of classy at the same time. I think black is really timeless.

Describe your style: It’s kind of a fusion between urban hipster and probably lumbersexual.

Warmer weather may be months away, but even in these frigid temperatures, bartenders at Frank's North Star Tavern are serving up a little taste of summer.