“Here it is,” says Luella Vaccaro, making her way down a dark, narrow staircase to the basement of her Lawrence home.

She flips a switch, casting light over the workbench where her late husband, artist and former Kansas University professor Nick Vaccaro produced some-130 mixed-media dioramas from the late '60s to the mid-'90s. 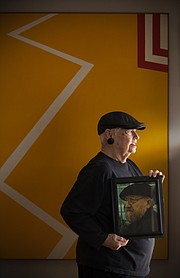 Luella Vaccaro is pictured with a portrait of her husband, the late artist and Kansas University professor Nick Vaccaro, before one of his paintings that hangs in her house. Nick Vaccaro’s mixed-media dioramas, or “Magic Boxes,” are currently on display at the Lawrence Arts Center, and Luella will give be discussing the works at an Arts Talk at 7 p.m. Thursday.

Gerber jars filled with nuts and bolts stick out amongst the mountains of objects covering the tabletop’s wooden surface. Seemingly random items — old toys, tools and even a few mannequin legs — hang from the ceiling. Along the walls, old orange crates and strawberry boxes act as storage for thousands of “throwaways” purchased over the years at garage sales, auctions, junkyards and the like.

Cost: This event is free and open to the public

It’s a lot of stuff, Luella acknowledges, but her husband had a purpose behind his chronic collecting. He wanted to turn other peoples’ trash into treasure.

For seven years, Nick — a prolific painter, printmaker and sculptor — gave up all other mediums to focus exclusively on what Luella now calls his “Magic Boxes,” whimsical pieces of art rich with “innuendo and puns and nostalgia,” Luella says.

Just over 100 of those works are on display now until Jan. 10 at the Lawrence Arts Center, 940 New Hampshire St.

On Thursday evening, Luella will share stories about the making of those Magic Boxes during an INSIGHT Art Talk. She’ll also unveil about 20 boxes that weren’t included in the show.

“It’ll be fun to pull these others out,” Luella says in the living room of the home she and her husband shared for nearly 40 years until his death in 2002.

This day — a cold, overcast Friday in early January — happens to be the 13-year-anniversary of Nick’s passing, so she's thinking about him a lot. 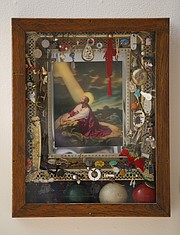 The two artists were a near-constant presence in each other’s lives, from first meeting in the courtyard of the Pentagon (Luella and Nick both served in the Air Force) to getting married and attending art school together at the University of Washington and the University of California, Berkeley.

“Rarely were we apart for more than a day,” Luella recalls of their 48-year relationship. “We were each other’s best critics and appreciators.”

Nick relocated his wife and son Nick Jr., a toddler at the time, to Lawrence in 1963 to serve as chairman of KU’s department of drawing and painting. He remained in that position for four years before returning to teaching — his biggest passion, Luella says — at KU until 1995. He was a professor emeritus at the time of his death. 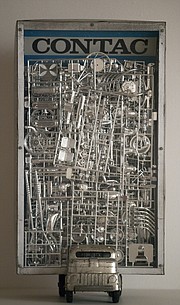 Those early years together, as art students and museum-goers, introduced the young couple to the works of Marcel Duchamp and Joseph Cornell, whose miniature mixed-media scenes inside boxes would later inspire Nick’s own “Magic Boxes.”

That, and boredom. There wasn’t much to do in Lawrence during the early 1960s — a handful of restaurants and two downtown theaters comprised the town’s entertainment industry, Luella recalls — so she and Nick started venturing out to auctions and farm sales in the area.

It wasn’t long before Nick started incorporating their quirky bargains into his work, and he produced the first “Magic Box” in 1967 using an antique sewing-machine drawer.

Of course, he carried the old thing around for weeks before finally deciding what to do with it, Luella says, but that was Nick — “the original pack rat and the original recycler.”

“I sent him to the dump with a load to drop off, and he came back with more than he left with, including three hubcaps that were brand new,” says Luella, recalling a story from their first year of marriage. “They didn’t fit our car, but Nick thought somebody could use them.”

Born at the height of the Great Depression in 1931, Nick was the last of six children in a family of Italian immigrants. Money was tight, and there were mouths to feed.

Nick no doubt picked up his thriftiness from his mother, who was tasked with finding creative ways to eat for cheap. She’d often use turkey necks, discarded bits that the butcher would give her for free, as a base for spaghetti sauce.

“Nick said he was an adult before he knew a turkey had anything except a neck,” Luella says with a laugh.

Later in life, a malignant tumor on his spine left him paralyzed from the rib cage down. He had to learn how to walk all over again — and he did — but found his work hindered as a result.

The inability to stand up for hours at a time meant no more painting, and so the industrious artist turned instead to collages, which he could do sitting down.

Health problems plagued his last seven years, says Luella, but Nick still went into the studio every chance he got. “Then, things were OK,” she says of his happy place.

Revisiting the “Magic Boxes” means tapping into old memories for Luella, who says she’s eager to give them “new homes and new caretakers.”

Most of the approximately 100 pieces in the Arts Center exhibition are for sale, save for a few.

One of Luella’s favorites — a box with wooden letters that spell out, “Nick loves Luella Vaccaro” — will stay with her.