In many ways, 2015 is a crossroads for the Lawrence arts community. This year promises a new arts and culture director for the city and the development of an arts corridor along East Ninth Street, among other changes. We asked leaders of various city arts groups about what's in store for the local music, visual arts, film and theater, as well as the arts community as a whole, over the course of the next year and beyond. 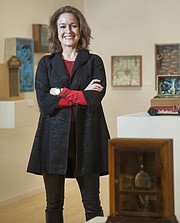 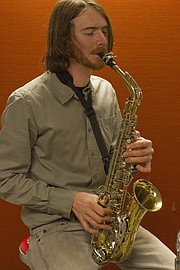 Lizzie Leech holds a clapperboard on set of one of the short films being shot for “Threads.”

Susan Tate is the chief executive officer of the Lawrence Arts Center. Since joining the Arts Center in 2009, Tate and her staff have developed what they call the “STEAM” curriculum: a play on STEM (an acronym for the fields of science, technology, engineering and math) that also counts art as a vital tool for teaching innovation and creative thinking. Within those five years, the Arts Center has also expanded its visiting artists program, launched the Free State Film Festival (which has since greatly expanded and is now known as just the Free State Festival) and in June earned a $500,000 grant from ArtPlace America to redevelop a portion of Ninth Street in East Lawrence into a unique arts corridor.

On her goals for the Lawrence Arts Center: My hope is that in 2015, we will be able to reach all families and students who might not have access to visual and performing arts.

On her goals for the Ninth Street Corridor: The Ninth Street Corridor project will be the first creative-driven street redesign Lawrence has ever done, and I look forward in 2015 to developing processes in which private and public partners work together to enhance the visibility and celebrate what Lawrence is like and bring artists into the design process for our public street.

On her hopes for the greater Lawrence arts scene: I’m looking forward to the development of the communitywide arts and culture plan that does two things: considers all of the investment we currently have in arts and culture across our community — including Haskell, including the University of Kansas, including all arts organizations and individual artists — but also covers ways to support the interests of people we might not know about yet.

Rolf Petermann is a co-founder of Whatever Forever Tapes, a Lawrence DIY collective and music label that produces cassette tapes. The label recently settled in to its new home at SeedCo Studios, which relocated to a renovated industrial building at 720 E. Ninth St. in September. In 2010, Petermann and a group of friends began hosting DIY shows at a small venue called Pizza Power. The place eventually shut down because of noise complaints, but its spirit lives in the form of traveling shows. The reinvented Pizza Power, now facilitated by other local musicians, will stage its next concert in February.

On his hopes for Whatever Forever: What I’m most excited about is seeing some of the younger musicians interacting with more established ones. It’s just exciting to have new energy like that — people who are really enthusiastic about it. They’re enthusiastic about what we’ve been doing and it’s just fun to meet new people to play with and collaborate with.

On trends he’s noticed in the Lawrence music scene that he hopes will continue in the future: I’m really excited about all these different types of venues. I like the bar shows because they pay well for musicians, but it’s really refreshing to go to different kinds of shows, like early shows and shows in DIY spaces and house shows.

The recording studio at the library gives the public access to pretty decent microphones, and I heard there’s an engineer there now, so that’s kind of in line with some of the new music infrastructure in our community. I think people have realized and accepted that it’s a pretty creative town in terms of the arts, and the infrastructure to support that is part of what makes it possible. It’s pretty awesome that the library is offering that service.

Molly Murphy is an artist and has worked as coordinator of Lawrence’s Final Fridays for the last four and a half years. She will remain in the position until the city hires a new director of arts and culture, who will take over all Final Fridays responsibilities (Christina McClelland resigned from the position late last month). Applications for the position close in early February, Murphy says.

On her hopes for the new director of arts and culture: I think an important aspect is going to be a personality that can bring people together and really hear what every single group represented would like to see going forward. I think everybody has very valid interests in what they’d like to see in the arts going forward, so I think that person will have to be kind of a community builder.

I’m hoping that we’ll find a strong leader for that position soon. I think that’s going to be pretty integral to what happens in the next few years in Lawrence.

On her hopes for Final Fridays: I would like to see even more outreach. We have a lot of art here that we could have a little more regional exposure. I would like to see some more marketing outside of just Lawrence. We also don’t have a ton of public or performance art at this point. I think bringing things outside of gallery spaces and making it more accessible to the public is a huge educational tool for people who are newbies and who might feel intimated going into a gallery or feel like it’s more of an exclusive thing.

On her hopes for the greater Lawrence arts scene: I’d like to see some more professional and entrepreneurial development for artists in Lawrence. Kansas City has resources for artists, and they probably retain a lot of brilliant and creative minds, and we’ll probably lose a lot of students and working artists to the Kansas City art scene, because they do have a little more support there. I would like to see quite a bit more integration of artists into design and planning, marketing, creative problem-solving processes in Lawrence.

Mary Doveton is the executive director of Theatre Lawrence, which moved to its new location at 4660 Bauer Farm Drive in 2013. In its first full year there, Theatre Lawrence’s attendance increased by about 65 percent, Doveton says.

On her goals for Theatre Lawrence in the future: We have a strategic planning committee in place right now that’s discussing how the theater can and will evolve.

We’re an interesting institution because we have several different constituents, because we’re serving both a volunteer base and our other constituents who are, of course, our audience. We’re interested in what shows they want to see and what activities do they want.

On her predictions for the Lawrence arts scene in the new year: I think we’re at a really exciting point. We’re trembling on the brink of all kinds of changes, and whether or not people like those changes or agree with those changes, at least people are talking about them.

Dave Loewenstein is a muralist, writer, printmaker and founding member of the Lawrence Percolator. In 2014, he was selected as a “cultural agent” to spearhead the U.S. Department of Arts and Culture in Lawrence. The national movement is a band of artists dedicated to cultivating social change through creativity. Most recently, the East Lawrence resident has voiced concerns over the Ninth Street Corridor project.

On his hopes for the Ninth Street Corridor: I live on the east side and my studio’s on Ninth Street, so I’m kind of in the middle of all that. My hope is that the process would be more equitable. This is a project that, for better or for worse, folks who live and work along East Ninth Street didn’t choose. They weren’t involved in writing any of the grants or deciding that it would happen at all, so my hope is that they’ll have more of a role in the process from here on out.

On his hopes for the U.S. Department of Arts and Culture in Lawrence: It’s putting in contact all these folks who are already doing this work nationwide. Lawrence has been really active, not just through me but through the work of this core group of people.

We’re seeing who’s interested and feeling out how we fit. We’re not an issue-driven group. We want to partner with other folks when it makes sense — to advocate for them, to help bring arts and cultural components to the campaigns or struggles or celebrations with their involvement.

On how he sees the Lawrence arts scene evolving in the next year and in the long term: It’s so hard, because on one hand, you can expect that there’s going to be amazingly creative people — young people, students and the rest of us — who are involved in the ongoing shaping of our stories. Can we support art galleries? Before that, can we support artists? One of the things that Lawrence has always struggled with is keeping artists around. I think we’re doing a better job of getting people interested in being an audience for art, but I’m not sure that we’ve figured out the other part.

Marlo Angell is a filmmaker, writer and the digital media director at the Lawrence Arts Center. She also serves as the film curator for the Arts Center’s Free State Festival, and is a co-founder of Women of Lawrence Film, a collective of local female filmmakers who mentor youths.

On trends in the local filmmaking community: What I see as technology gets more affordable is that’s easier to make more products. I see a bigger plethora of filmmaking projects in town, which is exciting. It’s cool to see people who are able to get their hands on affordable DSLR cameras and shoot their own films, and we also have really professional films coming out, too.

At the (Free State) festival, we have more and more entries coming in. Younger people are really engrained in media, so it’s exciting to see young take ownership of their stories using this art form.

On her hopes for the greater Lawrence art scene: I’d love to see an artist, maybe a painter, trying film for the first time. The more that mediums work together and collaborate, some really exciting things can happen.