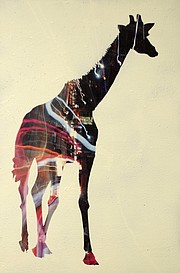 The Bourgeois Pig, 6 E. Ninth St., will debut “Life in the Urban Jungle” this Final Friday. The show features the work of Erok Johanssen, a Lawrence-based mixed-media artist.

As a member of the Fresh Produce Art Collective, Johanssen has shown in and curated more than 75 shows from Lawrence to Paris. His work combines the color and energy of graffiti (where he got his start as an artist) with the “more representational images produced through photography.”

Boston terrier valentines by Liza MacKinnon. The Lawrence artist will display her work at the Phoenix Gallery's "It's Sweet to Be Local" show, debuting Friday.

In a nod to Valentine’s Day, the Phoenix Gallery will host “It’s Sweet to be Local,” a joint celebration between the gallery (825 Massachusetts St.), the Raven Book Store, Mass Street Sweet Shop and Z’s Divine Espresso.

The event will feature nine local artists — including Liza MacKinnon, Bob Gent and Rachael Sudlow — and several pieces created especially for the Valentine season, plus live music by Tyler Gregory.

The Raven will also be on hand with books and “other items to celebrate the season.” Mass Street Sweet Shop and Z’s Divine Espresso will supply Valentine treats, coffee and more samples.

Leslie Kuluva, also known as Leslie Kay in the arts scene, lays a Hanukkah card within a screen printing press as she prepares to add another color on Friday, Dec. 12, 2014 at her studio, 518 E. Eighth Street.

Henry’s wants to “warm your soul” this Final Friday with art, hot apple cider and free massages. A winning combination, no?

From 6 to 9 p.m., stop by the coffee shop (11 E. Eighth St.) for the “Just a Taste” reception. Works by 16 local artists (including SeedCo Studios director Jeromy Morris and Leslie Kay, owner of LFK Press) will be on display.

After taking in some art, relax with a sample massage from Chelsi Reed of Mass Relaxation.

A limited edition of Lambert’s Fine Art Digital Prints will be available for purchase on that Friday, and hors d’oeuvres and beverages will be served.

The New York City-based artist has been featured in publications like Rolling Stone and Harper's Bazaar, and has shown his work in New York City and Amsterdam. Originally a photographer, Lambert now works in oils and mixed-media paintings.

Just in time for Valentine's Day, the Percolator (913 Rhode Island St.) will kick off "The Love Show" this Final Friday.

Organizers behind the show, now in its third incarnation, asked the community to submit work built around the theme of love. Last year's event featured nearly 80 artists of different ages and skill levels.

If you haven’t made it out to SeedCo’s new location at 720 E. Ninth St., mark your calendar for the space’s open studios and resident group exhibition.

Come by anytime between 6 and 9 p.m., and check out the work of nearly 20 resident artists, including ceramicist Kyla Strid, painter Kate Larson and SeedCo manager Jeremy Rockwell.