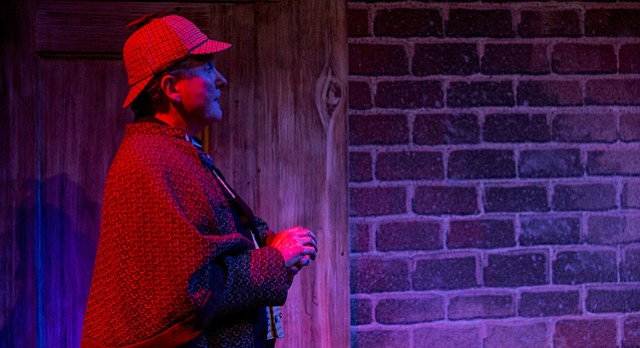 Sherlock Holmes, portrayed by Robert Brand and wearing Holmes' classic deerstalker hat, inspects a building during a dress rehearsal for the upcoming Kansas Repertory Theatre production of "Sherlock's Last Case" on Tuesday evening at Crafton-Preyer Theatre in Murphy Hall. The show opens on Friday and runs through early August concurrently with a production of Agatha Christie's "The Mousetrap." 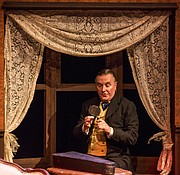 The modern riff on Sir Arthur Conan Doyle’s detective tales will be performed in rotation with Agatha Christie’s “The Mousetrap” throughout this month and into early August.

While set in wildly different periods, the plays have much in common. And in keeping with repertory fashion, they’ll also share a cast in KRT’s productions, which debuted last summer as the Kansas Classical Repertory Theatre. 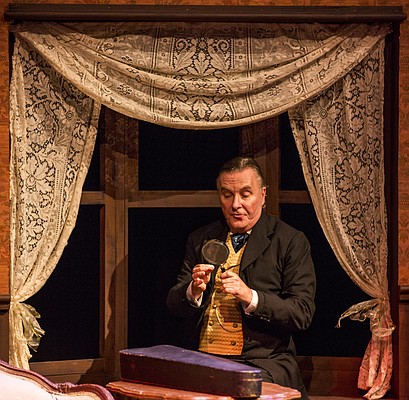 Sherlock Holmes, portrayed by Robert Brand, uses his trusty magnifying glass to inspect a clue during a dress rehearsal for Kansas Repertory Theatre's production of "Sherlock's Last Case" on Tuesday evening at Crafton-Preyer Theatre in Murphy Hall. by John Young

It’s a respectful tribute to the classic tales, says director D. Scott Glasser, while also poking fun at the “fascinating and impossible” detective.

“‘Sherlock’s Last Case’ is a take on very eccentric characters and the class distinctions among them,” says Glasser, who teaches theater at the University of Nebraska-Omaha. “The language has a life of its own. The actors speak like they’re inside a Sherlock Holmes tale.”

The mystery centers on a death threat against Holmes by the supposed son of his late nemesis Professor Moriarty, who fell to his death during a fight with Holmes at Reichenbach Falls in “The Final Problem.”

Kansas Repertory Theatre is staging productions of "Sherlock's Last Case" and "The Mousetrap" concurrently from July 17 through Aug. 2 at Kansas University's Murphy Hall. For a complete schedule of performances and to purchase tickets, visit kutheatre.com.

Glasser says the play — which also features familiar characters such as sidekick Dr. Watson, landlady Mrs. Hudson and Inspector Lestrade — should entertain fans of the books with its self-referential humor.

For KRT’s production, the audience will be seated on stage at the Crafton-Preyer Theatre (mimicking the proscenium of ancient Greek and Roman theatre), which Glasser says “creates a very intimate space” of about 120 seats.

“There’s a long history of Sherlock Holmes stage productions that go all the way back to when Conan Doyle was writing the (stories). A lot of times, a false proscenium was used,” Glasser says. “We’re harkening back to those stage productions.”

Sherlock Holmes, portrayed by Robert Brand and wearing Holmes' classic deerstalker hat, inspects a building during a dress rehearsal for the upcoming Kansas Repertory Theatre production of "Sherlock's Last Case" on Tuesday evening at Crafton-Preyer Theatre in Murphy Hall. The show opens on Friday and runs through early August concurrently with a production of Agatha Christie's "The Mousetrap."

“The Mousetrap,” which debuts July 24, is the longest-running play in history. Since its London premiere in 1952, the Agatha Christie murder mystery has been staged over 25,000 times.

Set in the years immediately following WWII, the play opens on a group of eight strangers snowbound in a London boarding house who are left to solve a brutal murder before the killer — who could be one of them — strikes again.

“I’m pretty sure that in the '60s, '70s and '80s, you couldn’t talk to anyone who went to the theater who hadn’t seen it,” says Weaver, who also serves as director of theatrical arts at Bishop Seabury Academy.

Throughout the play’s 60-year run, theatergoers have been asked not to reveal its famous twist ending. Weaver says he’s planning to carry on the tradition with his staging, which he thinks will retain its mystery since “The Mousetrap” isn’t quite as prevalent in pop culture as it was during its heyday.

He says younger audiences — particularly kids who enjoy the Clue board game, which shares some pretty striking similarities with Christie’s whodunit — will have fun trying to “puzzle out” the mystery when “The Mousetrap” opens later this month.

Weaver, a longtime Christie fan, first saw the play about a decade ago while his wife was starring in a Kansas City production. He remembers discussing the twist ending with her afterward, but otherwise made a point not to blab.

“You feel like once you’ve seen the show, you’re part of a special club,” Weaver says. “I think that’s something audiences will be really excited about — being the keeper of the secret until the next group gets to see it.”

To purchase tickets and see this season's schedule, visit KUTheatre.com.