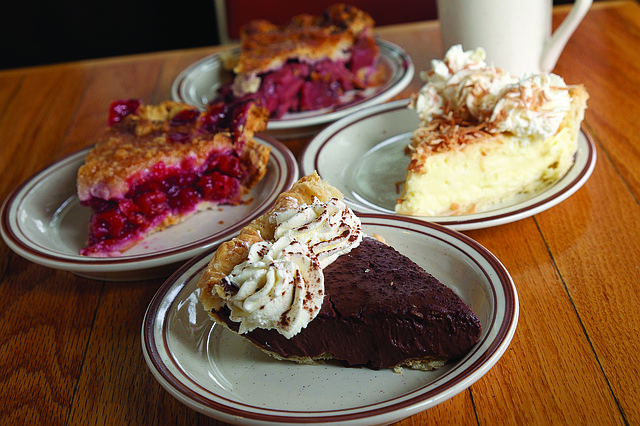 Editor’s note: In March, Ladybird Diner was affected by a fire at a neighboring business, causing the restaurant to close its doors for renovations because of smoke damage. Ladybird plans to reopen in summer 2015.

“Our objective is to be lively and approachable,” says Ladybird Diner owner Meg Heriford. “Ladybird is staffed by friendly, energetic people. It’s a little family.”

Ladybird is her first restaurant endeavor, and Heriford says she designed the menu and atmosphere after her own heart. The nostalgic offerings — everything from hamburgers and shakes to pancakes and omelets — are sure to remind customers of homemade cooking.

“The base menu is me; that was my input,” Heriford says. “Scratch cooking and Americana appeal — that’s really my roots.”

Heriford says Ladybird’s daily specials, which are dreamed up by staff and rotate daily with dishes from Germany to Mexico, along with the classic diner food, offer customers a satisfying experience.

“From Southwestern dishes to Midwestern grandmother, it all sort of melts together into this American diner experience,” Heriford says.

To complete the “diner experience,” Ladybird prides itself on its pies and pastries. With combinations like gooseberry apricot and blueberry basil, along with classics like Ladybird’s best-seller, coconut creme, Heriford says she’s proud to serve the community a slice of what she thinks they’ve been missing.

“There wasn’t a place to get a piece of pie in this town that wasn’t corporate,” Heriford says. “We sat down and thought, ‘It’s time to have a place that you could have dang good coffee and a great cherry pie.’”