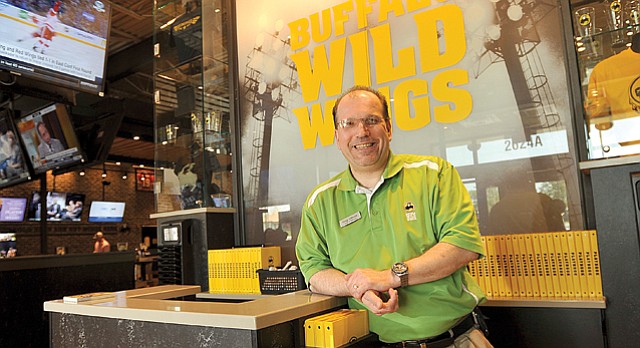 The Lawrence Buffalo Wild Wings relocated from downtown to its new Iowa Street location in December, says Craig Miller, operations general manager. In addition to the menu of hot wings and beer it’s always had, the new location has a lot more space.

And that means a lot more TVs for watching sports.

Buffalo Wild Wings boasts 65 TVs at its new location, Miller says. Eight of those are on the patio, which has space for 18 tables.

“There’s not a bad seat in the house,” he says.

To go along with the game, the restaurant serves its signature wings — choose from 16 sauces, sweet to “Blazin’” hot — other bar and grill items and plenty of cold beer. The restaurant has Wing Tuesdays and Boneless Thursdays wing specials, plus Happy Hour from 2 p.m. to 7 p.m. on weekdays.

True to the Buffalo Wild Wings motto, Miller says, customers are there for the atmosphere: “wings, beer and sports.”