Off the Beaten Plate: Red bean pancake at Panda and Plum Garden 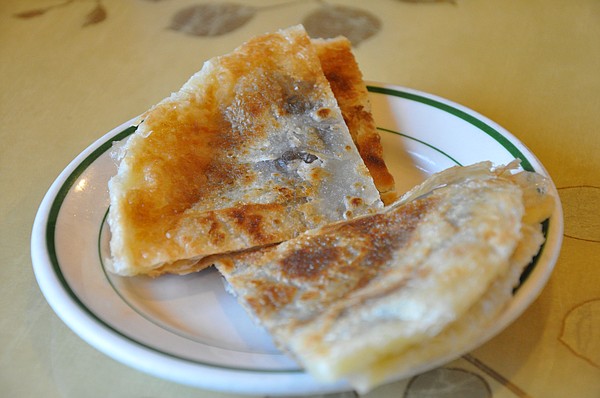 Maybe it’s time to rethink legumes and their place in the culinary repertoire.

In Western cultures, we’re plenty fond of beans, but usually relegate them to savory dishes (oh, hey, green bean casserole). That’s not the case in many Asian countries, especially China, from whence this week’s Off the Beaten Plate selection originated.

You’ll find the red bean pancake on Panda and Plum Garden’s authentic Chinese menu (as opposed to the Chinese-American menu that caters more to Western diners) alongside exotic offerings like seaweed salad and fishball soup.

It’s sort of like China’s version of a crepe — thin, flaky, buttery dough filled with sweetened paste made out of red beans. The pancake is cut into quarters like a quesadilla, but rest assured, it’s definitely a dessert — one that can be easily split between two people as a sweet little snack.

Try it with: Go all out with an entree from the restaurant's authentic Chinese menu.

Also on the menu: While at Panda and Plum Garden, we also sampled an entree of lightly fried flounder fillet sauteed with duck egg whites — you can find that one on the authentic menu as "S 19" — and ginger beef from the so-called “regular” menu. It’s a tasty, filling dish of thinly sliced beef in stir-fried ginger and onions. Aside from Chinese fare, the restaurant also offers some Thai dishes (like panang curry and pad thai) as well as American staples such as pork chops and a Kansas City strip steak.

— Off The Beaten Plate highlights some of the more exotic, oddly named or inventively concocted dishes from local menus. Know of an offbeat item we should check out? Email reporter Joanna Hlavacek at jhlavacek@ljworld.com. Follow her at Twitter.com/hlavacekjoanna.