June Final Friday Preview: A fundraiser for Pet World, and the debut of a new community photo studio 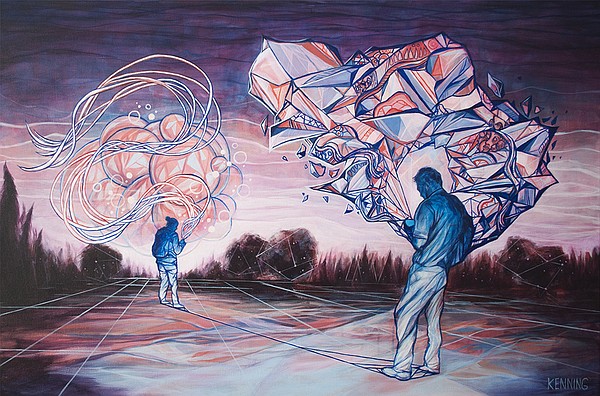 With the Free State Festival in full swing, you'll find a wide variety of festival-related arts events on the schedule for this month's Final Friday.

We've already covered quite a few of them — though, to be sure, there are plenty more cool activities where those came from — so for June's Final Friday preview, we're highlighting a few non-Free State Fest happenings that otherwise might fly under your radar.

For a complete list, check out Final Friday's Facebook page. As usual, all events are scheduled for 5-9 p.m. Friday unless otherwise noted.

Every Final Friday, the folks at Culinaria Food and Wine donate a portion of their food and drink sales to a local group or charity. This month, the catering business has chosen to benefit Pet World, where an electrical fire killed several animals on Memorial Day.

Culinaria, 512 E. Ninth St., is inviting guests to an evening of food and local art from 5 to 9 p.m. All proceeds from sales of the donated artwork will go directly to the pet shop.

The exhibition will remain up throughout July. Art can be purchased on Friday, during Culinaria’s Wine Club (with a reservation) on July 15, by appointment most Tuesday and Thursdays from noon to 4 p.m. or during Culinaria’s regular Friday night Supper Club each Friday evening after 5 p.m.

“Nevermind the Weather,” an exhibition of paintings by Jason Kenning, is set to debut Friday at the Lawrence Percolator, 913 Rhode Island St.

Taking inspiration from “the way our culture consumes technology just as the environment is consumed by it,” the series asks questions relating to topics such as climate change and technology’s effect on mankind’s ability to relate to one another.

The Lawrence Community Photo Studio will have a grand opening featuring an exhibition of work by photographer John Clayton.

The space, located next to SeedCo Studios at 720 E. Ninth St., suite 6, is a nonprofit organization with the goal of assisting the Lawrence community in all its “photography-oriented adventures.”

“Unearthed,” a collection of new works by Nathan Hein, will debut with a reception at Henry’s Friday evening.

The works in “Unearthed” meld natural landscapes with precise structures, setting up a meeting ground between “abstract chaos and exacting precision” where a few people live among their towering creations.

The Cider Gallery, at 810 Pennsylvania St., will feature new paintings and drawings by Kyle Goddard and Robert McNown, respectively.

Goddard’s work draws partly from his nine years with the Army Guard, which included a deployment to Afghanistan, where “the overt use of repetition and organization would leave an impression” on the fledgling artist.

Influenced by the early Modern artists and the New York Abstract Expressionists, Goddard also finds inspiration through architecture, the forms of casual elements of everyday life and “the persistent geometry of which we are surrounded by.”

With more than four decades of art-making under his belt, McNown spent most of his artistic career inspired by the systematic process of “hard-edge color painters” such as Gene Davis.

In recent years, the Kansas University graduate has returned to more free form and spontaneous mark-making, while trying to let the medium dictate the image. His choice of materials — whether pencil, crayons, rubber stamps, shoe polish, ink or others — is intrinsic to his process.