Upcoming Benefit Art Auction expected to be a big draw

It’s a sunny Thursday at the Lawrence Arts Center, and on the surface, the mood appears tranquil inside one of the space’s three galleries. 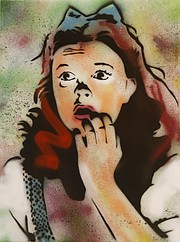 Save for a few paintings leaning up against the blank walls, the room is mostly empty. Of course, it won’t stay that way for long, promises Ben Ahlvers, the center’s exhibitions director.

The 2015 Benefit Art Auction will be held March 13 through April 11 at the Lawrence Arts Center, 940 New Hampshire St. The exhibition and silent auction begin Friday with a reception from 7 to 9 p.m., and will run until April 11, the day of the live auction. Tickets for the live auction cost $40 in advance and $50 at the door. They can be purchased online, by phone at 843-2787 or at the Arts Center box office.

In less than a week, the galleries will be full of artwork, as Ahlvers and Arts Center staff kick off the month-long exhibition that will culminate in the 34th annual Benefit Art Auction on April 11.

The money raised at the event generates support for a whole year of exhibitions programming at the Lawrence Arts Center, and it’s a big affair.

"The Drift of Things," oil on canvas, by Clare Doveton

“Most of the work is done by that point, but there are so many different facets that night that have to be done in a very precise order,” says Ahlvers, who has helmed the benefit for five years now. “As long as it’s all planned well, it should go smoothly.”

Thousands of people will stream through the building during the next month, Ahlvers estimates, all to see more than 150 works from as many artists.

Clare Doveton, whose work was displayed at the Arts Center from Jan. 16 to March 1, is this year’s featured artist. A handful of Doveton’s paintings, which depict otherworldly Kansas landscapes, will be among those up for bid in the benefit’s live auction.

Like Doveton, the bulk of participating artists — both in the live and silent auctions — are locally and regionally based. This year, that roundup includes well-known Lawrence staples like Roger Shimomura, Hong Zhang, John Sebelius and Lora Jost. Ahlvers, a ceramist by trade, has also donated his work for the auction.

A few of the Arts Center’s recent visiting artists — including Patti Warashina and Akio Takamori, professors emeriti of art at the University of Washington — round out the diverse roster, which Ahlvers says is a reflection of exhibitions programming at the center.

“We have young, emerging artists who are hungry for exposure and opportunities, and we have people who have been around the block and are in museum collections,” he says. “And then you have people who really love this place, and they want to help out in any way they can.” 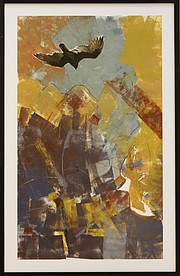 More than 100 pieces will be featured in the silent auction, which begins with a public reception from 7 to 9 p.m. Friday, while the remainders are reserved for the live auction April 11. Patrons will be able to bid online for both events at the Arts Center’s website as soon as Friday.

Organizers are hoping to generate $120,000 from the this year's auction — a goal they’ve met or exceeded for the last several years.

Per Arts Center rules, bidding starts at 50 percent of the piece’s retail value, as set by the artist. Prices range from about $25 all the way up to $11,000.

In recent years, sold pieces have averaged more than 100 percent of the retail value. It’s not surprising to Susan Tate, executive director of the Arts Center, who bought her first piece of original artwork at an Art Benefit Auction with her husband more than 20 years ago.

“We found that patrons really want to buy art above the retail value because they believe the art they’re purchasing here is of a particular quality,” Tate says. “Patrons really realize the value of purchasing original art.”

It’s when the pieces are carried out onto the Arts Center’s main theater stage for bidding that things get a little crazy, Ahlvers says.

“People are raising their paddles and yelling out numbers, and it’s very exciting,” he says of the event, which attracts around 600 attendees every year.

In addition to artists and patrons, there are nearly 100 unseen helpers — from auction workers to musicians to bartenders and caterers — who make sure the whole thing runs like clockwork.

“It’s about artists donating art, but it’s also about all sectors of the community giving what they can to make the auction a success,” Tate says.