With temperatures already warming up, it's a good time to take a look at a the crop of activities on the calendar for this spring in Lawrence. We've rounded up a few of the many fun arts, entertainment, music, food, theater and performance events going on between now and the start of summer. Looking for more? Check out our daily calendar of events at LJWorld.com/events. 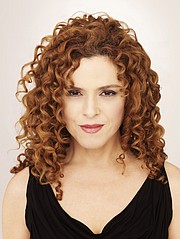 A Kansas University algebra class studies in front of artist Sol LeWitt’s "Wall Drawing 519" at the Spencer Museum of Art.

Of Montreal will perform April 1 at the Granada 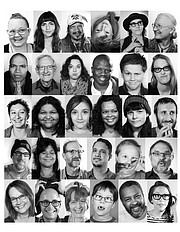 The citywide Lawrence Inside Out exhibit kicks off during the April 24 Final Friday festivities. 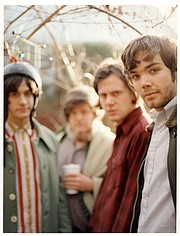 Anna Deavere Smith, Snapshots: Portraits of a World in Transition will be May 14 at the Lied Center 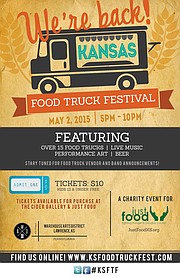 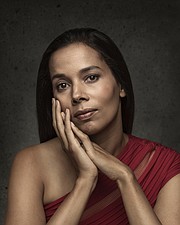 The stage-and-screen legend will lend a dose of Broadway glamour to the Lied Center Stage on March 24. Peters is the winner of three Tony Awards, a Golden Globe, two Grammy Awards and received three Emmy nominations and a star on the Hollywood Walk of Fame. She’s also a huge dog lover, and in honor of her performance, the Lied Center will host adoptable pooches from the Lawrence Humane Society in the lobby before Peters hits the stage.

Last Look at the Spencer Museum of Art

Ongoing from March 25 to April 12, Spencer Museum of Art, free

April 12 is the last day the museum is open to the public before the first phase of renovations transform the space. Over the next month, the Spencer will host a series of Last Look events to commemorate the occasion. Events include a juried art show from the Spencer Student Advisory Board starting March 25; a concert by KU’s Percussion Group featuring a special piece written by KU Professor Kip Haaheim to complement Sol LeWitt’s "Wall Drawing 519" on April 1; and a day of creativity and closing party April 12. For a full schedule of events, visit spencerart.ku.edu.

If you think chamber music is boring, perhaps it’s time to revisit the genre. On March 25, Stewart Copeland — acclaimed drummer and founding member of The Police — will team up with internationally known pianist Jon Kimura Parker for a “thrilling exploration of the new frontiers in chamber music” at the Lied Center. The performance will feature Copeland’s compositions and classical repertoire, including Parker’s suite based on Stravinsky’s “Rite of Spring.”

The Lawrence Public Library is encouraging readers of all ages to play with their food for the third annual Edible Books Festival, which asks participants to create an edible work of art based on the form, title or content of a book of their choosing. Those interested can register as an individual or team by calling the library at 843-3833; the deadline to enter is 5 p.m. March 26. Finished creations will be displayed at the library, where visitors can take a look and vote for their favorites.

Swarthout Recital Hall, which closed last spring for renovations after serving as the Kansas University School of Music’s primary recital venue for nearly 60 years, will celebrate the beginning of a new era with an eight-concert series starting March 30. The roster includes KU faculty and alumni as well visiting artists such as composer Eric Ewazen (April 14) and jazz vocalist Deborah Brown, whose performance will finish off the series May 1. All, except for the March 30 and April 1 concerts, are free and open to the public. For more information, visit music.ku.edu or call 864-3436.

Whether you’re a fan of their early '60s-flavored psychedelic tunes or the more recent transition to an electronic Talking Heads-inspired sound, you won’t want to miss Of Montreal’s upcoming Lawrence gig. The group released its newest album, “Auerate Gloom,” earlier this month.

Set in Victiorian-era London, this madcap comedy follows the prestigious Explorers Club as its male members consider admitting a woman into the fold. The candidate is highly qualified, of course, but letting a girl join the ranks could shake the very core of the British Empire. How will they decide? “Be prepared for some very mad science involving deadly cobras, irate Irishmen and the occasional air ship,” advises Theatre Lawrence.

Kansas University Theatre’s production of "Flora, the Red Menace" tells the story of an optimistic and high-spirited young woman in Depression-era New York City whose love life becomes complicated when she joins the Communist Party. The comedy was the first musical collaboration between John Kander and Fred Ebb, the songwriting team behind “Chicago” and “Cabaret.”

This annual event, now in its 34th year, is the primary funding source for the Lawrence Arts Center’s exhibitions program. After cocktails, hors d’oeuvres and live jazz at 5:30 p.m., about 40 pieces of art — valued cumulatively at more than $100,000 — will be bid off in a live auction commencing at 7:30 p.m. The benefit’s silent-auction portion, which features around 100 works, began last week and will run up until April 11. To check out the pieces up for sale, visit the Art Center or lawrenceartscenter.org.

The Lawrence Civic Choir is celebrating its 40th anniversary with a performance of Johannes Brahams’ "Requiem," accompanied the Lawrence Community Orchestra. More than 1,300 people have sang in the choir since 1975, performing music at venues across the country and world.

Fans of the animated 1982 cult classic — which tells the tale of a young unicorn who, believing she is the last one on Earth, embarks on a quest to find others of her kind — will no doubt flock to this special screening. As part of a worldwide tour of the digitally remastered flick, next month’s event will feature a Q&A “The Last Unicorn” author and screenwriter Peter S. Beagle.

“The Sage of Emporia”

This one-man show invites audiences into the living room of Kansas native and Pulitzer Prize-winning editor William Allen White, as portrayed by Jack Wright, a professor emeritus of theater and film at Kansas University. Based on “The Autobiography of William Allen White,” the play depicts the journalist’s later years, reading newspaper clippings and reminiscing with the audience from his home.

April is National Poetry Month, and to celebrate, the Lawrence Arts Center is hosting its second annual Poetry Fair. More than 80 poets will share their poetry via open mic and sell their books at the event, which gives visitors a chance to interact with the writers.

For nearly a year now, artist Rachael Perry has been capturing the faces of the Lawrence arts scene with her local take on the worldwide Inside Out Project. Featuring more than 500 people, her black-and-white portraits document not just artists but those who appreciate and support the arts locally. The photographs will be displayed in prints large and small throughout the city starting April 24, in both expected and unexpected Lawrence locations. For more information, visit lawrenceinsideout.com.

Lawrence-based design and build studio Struct/restruct is hosting an exhibit that encourages guests to not only touch the art but to sit on it. For one month, up to 40 functional chairs made of any material will be displayed — and used by patrons in a live environment — at Decade coffee shop, 920 Delaware St. Organizers will accept entries for the open-call show up until April 22, though participants must first fill out an artist agreement by April 17. For more information, visit structrestruct.com.

This nationally touring festival — which celebrates films made by, for and about women — will make a stop at the Lawrence Arts Center next month. The Arts Center, along with the GaDuGi SafeCenter and Women in Lawrence Film (WOLF) have partnered for the event, which will screen original shorts by WOLF members before presenting eight uplifting movies from around the world. Proceeds from the Lawrence Lunafest will benefit the GaDuGi SafeCenter and the Breast Cancer Fund.

It’s allegedly the “last tour for the foreseeable future” for these veteran indie rockers, who will bring their signature experimental sound to Liberty Hall this spring. Neutral Milk Hotel reunited in 2013 after more than 10 years on hiatus. So, get those tickets while you still can, music lovers.

Rhiannon Giddens’ stop at Liberty Hall comes on the heels of her debut solo album, the T-Bone Burnett-produced “Tomorrow Is My Turn,” which dropped in February to acclaim. The multi-talented musician is also the lead singer, violinist, banjo player and founding member of her Grammy-winning folksy string band, Carolina Chocolate Drops.

This Kansas Food Truck Festival, which will again benefit Just Food, is back for its second year, featuring live music, performance art, beer and of course, food trucks galore (over 15 are expected this year). Tickets are on sale now at Just Food and the Cider Gallery. Check back with ksfoodtruckfest.com regularly as it updates its list of participating food trucks.

Anna Deavere Smith, Snapshots: Portraits of a World in Transition

Television viewers may recognize Anna Deavere Smith from her work on “The West Wing” and “Nurse Jackie.” But the actress — who also teaches law at New York University and currently serves as the artist-in-residence at the Center for American Progress — is also a well-respected playwright, and will bring her one-woman show, “Snapshots: Portraits of a World in Transition,” to the Lied Center later this spring. Her solo presentations blur the lines between theater and journalism, using text from real-life encounters to produce powerful portraits of subjects such as a Korean shopkeeper, a bull-rider, a female convict and author Studs Terkel.