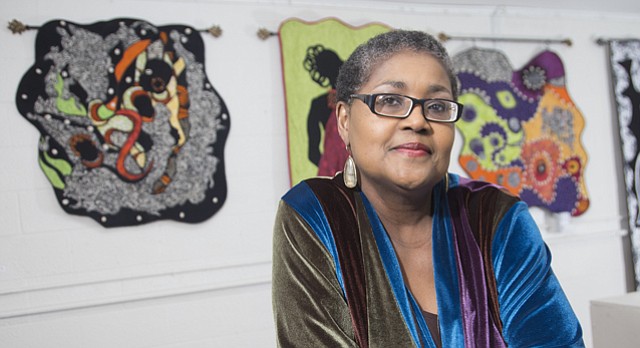 Quilter and historian Marla Jackson is pictured in front of her quilts on display at the Percolator, 913 Rhode Island St., as part of Jackson’s upcoming exhibition, “Tell Mama.” The exhibit, which opens during this month’s Final Friday, features 10 quilts that honor her mother, Fern Hill.

A few weeks ago, Lawrence artist Marla Jackson paid a visit to her mother in the hospital.

Fern Hill, a mother of eight by the time she turned 27, lost her eyesight about a decade ago. She’s now in the final stages of Alzheimer’s disease, and perhaps for the first time in her life, is relying on others — her husband and children — to take care of her.

There, in her hospital bed, the 82-year-old “looked like an angel,” Jackson says of her mother — a strong, determined woman who would find time to knock on doors encouraging people to vote or hand-bead pearls onto a doll’s wedding dress while caring for her large family.

Thinking her mother was resting under medication, Jackson gently called out to her.

No response. Jackson tried again. And again. It was after the third attempt that Jackson finally caught her mother’s attention.

“And finally she said, ‘What do you want?’” Jackson recalls, imitating her mother’s gruff, bark-like reply. “And I thought, ‘Oh, that’s the Fern we know and love. She’s still there.’”

Throughout the years, Hill has remained a strong presence in Jackson’s life — and in her work. She’s represented, at least figuratively, in all 10 quilts of Jackson’s new exhibition at the Lawrence Percolator. 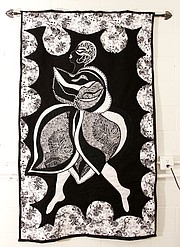 Marla Jackson made this quilt, "Ascending," in honor of her mother. Fern Hill, 82, taught Jackson how to sew and is now battling Alzheimer's disease.

“All of these quilts were made at different points in my life,” Jackson says while at the Percolator earlier this week. “I look at all these quilts, and they’re all about her, whether I was conscious of it at the time or not.”

Jackson, 62, is a renowned artist and quilter who also serves as the director of the African American Quilt Museum and Textile Academy, 2001 Haskell Ave.

Her works — which take inspiration from the oral histories of her ancestors and the Kansas region — have been exhibited at more than 35 national and international venues, including the American Folk Art Museum, the Museum of Biblical Art and the Smithsonian’s National Museum of African American History and Culture.

It’s surprising, then, to hear how Jackson “hated” quilting as the daughter of an avid seamstress growing up in Detroit in the 1950s and '60s. Back in those days, she was a defiant teenager rebelling against her mother.

That point is portrayed in “Tell Mama,” the show’s titular quilt. The work shows a figure (Jackson) turned toward another just as it appears to be drifting off the corner of the quilt.

“She didn’t think I was listening. I really was, but she didn’t know that,” Jackson says of her childhood. “This quilt represents, ‘Mama, I’m still listening whether you’re here or...'"

Aside from needlework — which Jackson returned to at age 28, eliciting disbelief and a few chuckles from Hill — her mother taught her many lessons that she still holds onto today.

Among them: to always hold your head up high. Jackson now admits she may have taken that one too literally. When she was young, she used to walk down the street craning her neck and looking up at the sky.

Hill also instilled a sense of personal responsibility in her daughter. From attending PTA meetings to sewing costumes for school plays to volunteering as a Cub Scout leader, the feisty mother made sure to set a positive example for her children, all in perfectly styled hair and makeup and more often than not, elegant outfits she’d sewn by hand.

As women, it’s all too easy to sacrifice our own needs in caring for others, the artist admits. But Hill, even as a working mother with eight kids at home, “kept a little for herself,” Jackson says.

“She took care of us, but she had her own life,” Jackson says.

Recently, she got a phone call from her brother. By the end of the week, they’ll have to decide if it’s time to move Hill into hospice care.

But Jackson says she’s already made a decision of her own.

“I don’t want to see my mother take her last breath. This is how I want to honor my mother,” Jackson says, her eyes welling with tears.

It’s the first time Jackson’s really talked about it, and she’s a little emotional. Her mother hasn’t seen the exhibition yet, and probably won’t, though she’s seen the quilts over the years and she's proud of her daughter.

“But this,” Jackson says, gesturing toward the quilts hanging from the Percolator’s walls, “is just perfect.”

• The Lawrence Public Library, 707 Vermont St., is encouraging readers of all ages to play with their food for the third annual Edible Books Festival, which asks participants to create an edible work of art based on the form, title or content of a book of their choosing. Those interested can register as an individual or team by calling the library at 843-3833; the deadline to enter is 5 p.m. Thursday. Finished creations will be displayed at the library, where visitors can take a look and vote for their favorites between 6 and 9 p.m.

• Phoenix Underground, 825 Massachusetts St., will host the second Juried Kansas University Visual Arts Student Exhibition reception from 5 to 9 p.m. The gallery asked students to find inspiration from the “textbook greats” to create an original work that is highly influenced by a particular time period, genre, style or artist. Winning works will be announced at 7 p.m.

• Next month, Wonder Fair, 803 ½ Massachusetts St., will celebrate its seven-year anniversary as a downtown Lawrence destination. In anticipation of that milestone, Wonder Fair is inviting guests to take 10 to 50 percent off items throughout the store and gallery during Spring Cleaning: An Original Art and Fine Print Super Sale from 5 to 10 p.m. The event features work by Justin Marable, Yoonmi Tam, Tugboat Printshop and Tonja Torgerson, among others.

• Browse pieces from more than 100 local and national artists on display at the Lawrence Arts Center, 940 New Hampshire St., from 5 to 9 p.m. The donated works are available for bidding in this year’s Benefit Art Auction, the annual Lawrence Arts Center fundraising event that will culminate in a live auction April 11.