Of Montreal gets its freak on 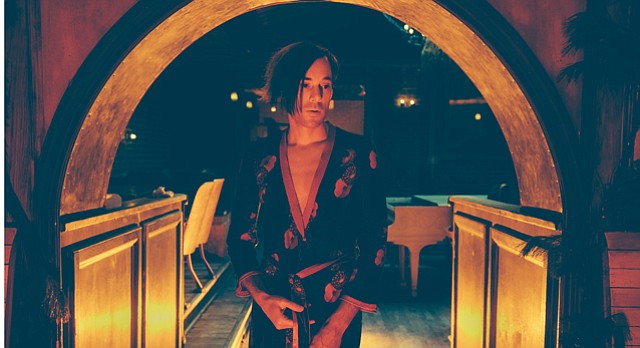 Of Montreal will perform April 1 at the Granada

When Of Montreal hits the stage, they tend to be theatrical and dramatic. Band members pull out all the stops when it comes to sequins and stimulation during their highly danceable numbers, and their show at the Granada on Wednesday will be no different. They put on, without a doubt, one of the oddest shows you’ll ever see.

But when they’re in Lawrence, they feel right at home. Lawrencians are, in fact, a little odd themselves, and if there’s one place where they choose to congregate, it’s an Of Montreal show.

The ringleader of this eye-popping show (no really, they use giant eyeball props in their set) is Kevin Barnes. He hails from Athens, Ga., and likens Of Montreal’s performances to Lawrence’s exciting college town atmosphere.

“The freaks of the town, or the people who are interested in the artsy thing, are open-minded and feel excited about being alive,” Barnes says. “It feels like people in Lawrence are similar kind of people.”

Really, Of Montreal can do it all. They can make dance music, psychedelic numbers, slow ballads and more. Their latest release, “Aureate Gloom,” is a prime example of the inner monologue ramblings Barnes tends to weave over busy guitars.

Of Montreal with Yip Deceiver will perform at 9 p.m. Wednesday (doors at 8 p.m.) at the Granada, 1020 Massachusetts St. Tickets cost $16 in advance and $22 day of show, and can be purchased at the Granada box office or thegranada.com.

As an artist, Barnes knows it’s nearly impossible to avoid transparency in your work. Although “Aureate Gloom” was inspired by a dark period in his life, he says the songs on the album become something else during the live show.

“The music is inspired by a bad experience, or a troubling experience, but not when we go onstage,” Barnes says. “When we play a song, it lifts my spirits in a way, and it becomes more joyful and it’s definitely very cathartic and a healing process.”

That sentiment is then shared between the audience and the performers onstage.

“I think because we’re dealing with a lot of universal themes everybody can identify with, we can share each other’s pains and lessen the weight on each other’s shoulders, in a sense.”

“Aureate Gloom” is the 13th album to come from Of Montreal. They have a Record Store Day release on the way, and are already a few songs into their next record. In a changing landscape where various sounds and styles from the indie scene become the mainstream, Barnes’ knack for standing his ground is what makes his style so unique.

“We sort of live in a bubble. I’m almost never inspired by contemporary movements,” says Barnes, noting that he doesn’t ever follow the trends in music. “We have a very strong identity in that way, in that we’re not really a part of anything. So we can have individuality or our own personality in any culture.”

Perhaps this is why Barnes doesn’t see a lot of variation with Of Montreal’s fans across the nation. From Athens to Kansas City and beyond, Barnes says he sees the “same type of human” no matter where they play. He likes to describe his fans as being very broad-minded and interested in different forms of art.

“I feel like we’re sort of underdogs, and the fans who come to the show are underdogs as well, and we can identify on that level,” he says. “It doesn’t feel like a voyeuristic thing at all. People are dressing up and dancing. It just feels more communal.”

That word, “communal,” is key with Of Montreal. Barnes is well aware the space the band provides to a certain unique type of person.

“I feel what we contribute to the world is helping people feel more comfortable with themselves, especially with a gender-bending aspect of our shows,” Barnes says. The band frequently tackles gender roles and sexual themes through the use of costumes and sketches vividly played out during their shows.

“You might be ostracized if you were to put on some glitter, and you were a young man, and go to the grocery store. You might be branded as a freak. But you can do that at an Of Montreal show and you’re still accepted. On a personal level, it’s cool for me to do that and have an outlet, let the gender roles dissolve.”

You can watch those gender roles dissolve when Of Montreal hits the Granada stage on Wednesday with Yip Deceiver.