Kansas City Connection: Don't be a stranger to this pie social

This week in Kansas City, a pie social at Little Stranger Church, "Tank" art exhibit at Grand Arts and Jazzoo at the Kansas City Zoo.

The 29th annual Sunflower Music Festival returns to Washburn University’s White Hall this weekend, bringing with it musicians from the Lawrence region and across the globe. The festival, which kicks off Friday and runs until June 13 in Topeka, will include 10 concerts of classical, chamber and jazz music. 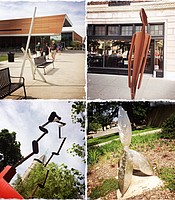 Some of the stories behind this year's works in the Downtown Outdoor Sculpture Exhibition.

Tell us a secret: I can juggle three flaming torches.

Today in Lawrence: Meet the buskers

Today in Lawrence: Clouds return, and get a Busker Festival preview at the Busker Ball

The 27th Annual Downtown Outdoor Sculpture Exhibition will kick off Friday with an opening reception and tour starting at 5:30 p.m. at the Lawrence Arts Center, 940 New Hampshire St. 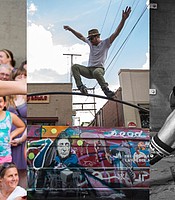 Things got a little weird at Tuesday night’s City Commission meeting. Citing “a car shaped like a phone,” a “street legal U.F.O.” and Lawrence’s general proclivity toward the odd, mayor Jeremy Farmer proclaimed May 29-31 as “The Official Weird Weekend.”

It’s a popular item at Kingfish Soul Food and Bistro, but you won’t see folks eating the pig-ear sandwich on a daily basis down South. At least that’s what the restaurant’s owner, who goes simply by Kingfish, tells me during a recent trip to the eastern Lawrence eatery.

Kansas City Connection: A bakery to satisfy your cookie addiction

“More Than Meets The Eye.” Those who grew up in the 1980s might remember the phrase from the old “Transformers” cartoons. It’s also the name of an upcoming collaborative exhibition featuring the work of Lawrence artists John Sebelius and Jeromy Morris.

It all started with a doodle. Lesa Weller had always struggled with mental health. Diagnoses for depression and bipolar disorder came early in life, and several suicide attempts marked her teenage years.

The Lawrence Public Library is helping to archive local bands past and present in a new initiative called the Lawrence Music Project.

More than 600 performers will take the stage at the Lawrence Arts Center this weekend, as the center’s School of Dance presents its annual End of Year Showcases.

Tell us a secret: Two times when I was trying to refill a patient prescription, I accidentally dialed 911 instead of 913. 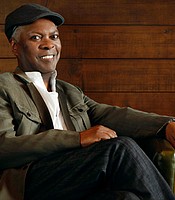 It was back in the ’70s that legendary blues musician Booker T. Jones discovered the importance of storytelling. The hall-of-fame musician will be sharing some of his stories Thursday night at Liberty Hall.

Off the Beaten Plate: Chicken gizzards at Set 'Em Up Jack's

When in doubt, fry it. That’s the takeaway from this week’s Off the Beaten Plate, which took us to Set ‘Em Up Jack’s in search of chicken gizzards.

A wet, gray day is in store, Purity Ring brings future pop to the Granada and Hank Charcuterie demonstrates how to butcher a hog.

Tony-winning actress Patti LuPone will replace a performance of "I Love Lucy Live on Stage" on the Lied Center's 2015-16 season schedule, it was announced Tuesday.

Today in Lawrence: Cooling off, electroluminescent puppets and Scott Weiland

Today in Lawrence: The sun takes a break, an electroluminescent take on classic children's tales, and Scott Weiland's new band comes to the Granada.

Kansas City Connection: Grinders Pizza and Celebration at the Station

There are thousands of places outside New York that claim to serve authentic New York-style Pizza, but a truly delicious slice of appropriately soft-yet-crispy pizza isn’t as easy to find as you’d think. But Grinders Pizza, at 417 E. 18th St. in the heart of the Crossroads, is the real thing. 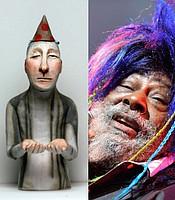 Don't let the heat keep you in the house all summer. From art exhibits to outdoor concerts to "The World's Best Slip N' Slide" there's a lot to see and do in Lawrence in the next few months.

Today in Lawrence: Rain, a world in transition, and local musicians perform for Nepal

Today in Lawrence: Expect rain for most of the day, Anna Deavere Smith's "Snapshots" and Gaslight Gardens hosts and benefit concert.

Tell us a secret: If it wasn’t for my job, I’d be covered in tattoos — at least a sleeve.

Whom do people say you look like? I do get Santa Claus sometimes and a lion.

Arc Flash isn’t your run-of-the-mill garage rock act from Lawrence. They write complex numbers, refer to themselves as “time wave space punk,” and evoke a wide range of emotions from their audience. The band will be among the handful of performers at this year's Spring Into Summer music festival Saturday at the Replay Lounge.

Off the Beaten Plate: Chinese Burger at 8 Flavors

It’s easy to walk into 8 Flavors and assume that the advertised “Chinese burgers” are some sort of wacky, modern riff on an American staple. After all, Americans invented the hamburger, right? Wrong.

Today in Lawrence: A nice day for tacos 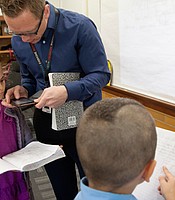 It’s a little past 8 a.m. Monday at New York Elementary and Shane Heiman’s second-grade classroom is busy pitching ideas to JanSport. The task at hand: designing a new feature for the company’s backpacks. Among the concepts tossed around: built-in video games, music players, iPads, pillows and in one of the more outlandish designs, a rainbow-tooting unicorn. A similar scene has unfolded every day since October. By Joanna Hlavacek

Today in Lawrence: A break from the rain; bid city manager farewell

The rain will let up for a couple of days and give Lawrence a chance to bid farewell to the outgoing city manager.

Kansas City Connection: Eating recommendations for moms (and everyone else)

Recommending a few Kansas City eating spots moms would like.

Actress and playwright Anna Deavere Smith will bring her one-woman show, “Snapshots: Portrait of a World in Transition,” to Lawrence this week as part of Kansas University’s Hall Center Humanities Lecture Series.

In honor of Mother's Day, we're celebrating three local mothers with musical talents — and the kids who have followed in their footsteps.

Today in Lawrence: Pack an umbrella (again), and a fantasy government draft

Today in Lawrence: A wet, windy day, and what a perfect government looks like

What’s your spirit animal? I discovered it’s a pink parakeet from this one assignment we had in art class.

Crepes & Taters boasts 20 different varieties of the thin French pancake, from sweet to savory, along with Belgian-style fries.

How does a glass of cold-press coffee come to look like (and sort of taste like) a pint of Guinness? That's the question we hoped to answer in this week's Lawrence Libations.

The Kansas University Jazz Studies Program and students were given top honors in the 38th Annual DownBeat Student Music Awards, the university has announced.

Behind the Lens: Journal-World drone could offer a different perspective

Recently, editors at the Lawrence Journal-World approached the photo department about incorporating video and still photographs shot from a drone into our reportage. Initially, the idea was met with some hesitation, in part because of the potential costs. But speaking at least for myself, I also was a bit nervous about crashing the thing and getting blamed for trashing a piece of expensive equipment. 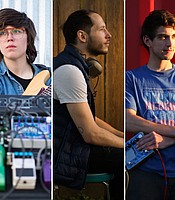 Moonlighting musicians: Lawrence musicians spread themselves across the scene

In the Lawrence music scene, sometimes you may think you’re seeing double, triple or even quadruple.

When you first walk into The Sundry, a market and grocery that opened last year in the Crossroads neighborhood, you’ll see a large chalkboard with a drawing of Kansas and Missouri. Pointing to the states are several arrows indicating the origins of The Sundry’s suppliers for meat, vegetables, dry goods, teas and a whole variety of products ranging from kombucha, a fermented tea drink and komatsuna, a green leafy vegetable, to succulents and soap. The Sundry doesn’t just stock local food — it serves them in a variety of tasty breakfast, brunch and lunch dishes, as well as pre-made dinners to take home.

Lawrence Arts Center to celebrate Mozart, Gershwin and others in 'Too Much, Too Early'

The Lawrence Arts Center, 940 New Hampshire St., will celebrate musicians who died before their time with "Too Much, Too Early: Composers who left us in their 30s" at 7:30 p.m. Friday.

Theatre Lawrence, 4660 Bauer Farm Drive, will host "A Spring Fling with Strings" at 7:30 p.m. Saturday. As part of the Dave and Gunda Hiebert Concert Series, the evening will feature the talents of the "Kansas Virtuosi," a group of musicians from the Kansas University School of Music faculty.

KU Symphonic band to perform Tuesday at the Lied Center

The Kansas University Symphonic Band will wrap up the 2014-2015 KU School of Music Lied Center Series with a performance at 7:30 p.m. Tuesday at the Lied Center, 1600 Stewart Drive. 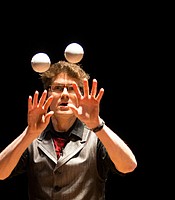 Today in Lawrence: See the TEDxLawrence show on video