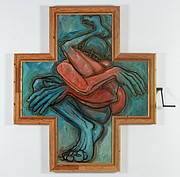 "A Distorted Sense of Melancholy (or) Contortionist of Indistinction" by Patrick Duegaw. Acrylic, ink, and polyurethane on wood panel with wood frame, 1997.

Decades later, the Wichita-based artist is exploring “the gray area” that falls between the two moral extremes in “The Innumerable Anxieties,” a 30-piece exhibition of his work slated to run May 15 to June 19 at the Lawrence Arts Center, 940 New Hampshire St. Duegaw will also give an artist talk at 11 a.m. Saturday at the Arts Center.

The titular anxieties, he says, refer to the broad swath of human behaviors that are “neither wholly good nor wholly bad.”

“It’s the idea that there aren’t just seven of them — they’re endless,” says Duegaw, 48. “I have endless anxieties. We all do.”

Culled from Duegaw’s ongoing loosely autobiographical “Painted Theatre Project,” the exhibition opens with a reception from 7 to 9 p.m. Friday at the Arts Center.

Duegaw, who has exhibited both nationally and in Canada, calls his “Set Piece” — a 28-foot-long panoramic rendering of Fisch Haus, the Wichita artist cooperative where he lives and works — the “Rosetta Stone of the show.”

“Well, that’s a huge anxiety of mine — that I would accidentally burn the Fisch Haus down,” he says of the painting, which depicts an overflowing coffee machine, precariously lit candles, loose wires and other hazardous motifs in its 320-degree view. “There are 40 degrees where you don’t know what’s happening. That’s part of the anxiety.”

What: "Patrick Duegaw: The Innumerable Anxieties"

When: The exhibition will open with a reception from 7 to 9 p.m. Friday, and will run until June 19. Duegaw will give an artist talk at the Arts Center at 11 a.m. Saturday. 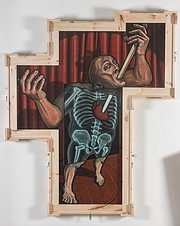 "Pierced by Dogma (or) The Misguided Sword Swallower" by Patrick Duegaw. Acrylic, ink, and polyurethane on wood panel with wood, steel frame, 2014.

A general sense of unease haunts “Set Piece,” which Duegaw says plays with themes of destruction and self-destruction.

Scattered throughout the panorama are “little clues,” like miniature versions of “Burning House,” a 1913 painting by Russian-born artist Marc Chagall, and Caravaggio’s “John the Baptist” hanging from the Fisch Haus walls.

“John the Baptist couldn’t keep his mouth shut, so he got beheaded,” Duegaw explains, referring to the religious leader’s condemnation of Herod Antipas’ marriage to his brother’s ex-wife, an action that led to his execution.

Other pieces depict acts you’d see at the circus, where Duegaw says it’s possible to feel what he calls “safe anxiety.”

In “Pierced by Dogma (or) The Misguided Sword Swallower,” a smiling man lowers a sword down his gullet, piercing his heart in the process. “A Distorted Sense of Melancholy (or) Contortionist of Indistinction” shows a contortionist with one foot bent over his shoulder.

“At the circus, you feel anxiety as you watch other people perform life-threatening acts, but you’re not in any danger,” he says. “That’s the idea of safe anxiety.”