“More Than Meets The Eye.”

Those who grew up in the 1980s might remember the phrase from the old “Transformers” cartoons, in which giant robots waged battle by converting into vehicles and other machinery.

It’s also the name of an upcoming collaborative exhibition at the Cider Gallery, 810 Pennsylvania St., featuring the work of Lawrence artists John Sebelius and Jeromy Morris.

That the show shares its title with the “Transformers” tagline is no coincidence, says Morris, who together with Sebelius created approximately 45 mixed-media pieces over the last six months for the exhibition.

“Some of the pieces that I’d put into the collaboration between us had been sitting around for three years. I’d toss it to him and all of a sudden, it’s finished,” Morris says. “It’s a transformation process.”

Most of “More than Meets the Eye” started out as finished works by either artist. The friends would pass pieces back and worth — often meeting up at Morris’ SeedCo studios workspace in eastern Lawrence — in a process Sebelius calls a “visual telephone.”

Giving minimal direction and allowing the other artist to alter — or in some cases, “destroy” — works has been “freeing,” Sebelius says.

“One can be much more passive and the other might have a lot more movement and electricity to it, but sitting next to each other, they really speak in this dialogue,” he says of the pieces. “It’s something we didn’t really think about until we started making each separately, and then the way were doing it kind of fed into them all seeming like a big family.” 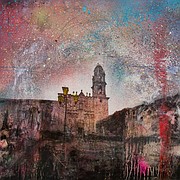 Many of the collaborated pieces (Sebelius and Morris will each display between six and 10 individually made works in the show) are framed on wooden panels, their surfaces coated with epoxy to give a glossy finish.

There’s not a cohesive message to the show, the pair says, though the idea of revisiting adventures from days gone by seems to be a recurring motif.

Much of the imagery in Morris’ mixed-media work comes from his days as a professional roller-blader, a gig that took him all over the world to places like Spain, Mexico and Japan. These days, with a family and a house to look after, Morris is retired from the skating circuit, but still takes his trusty camera along most everywhere he goes.

And he’s still got the hard drives — with “thousands” of images — from his travels.

“Whenever I’m needing inspiration, I just sit there for hours and click through photographs,” says Morris, 36. “One will hit me all of a sudden that I’ve had for 10 years. I’ll print it out and then the whole process starts.”

While some of “More Than Meets the Eye” features images from Morris’ more exotic travels — San Miguel, Mexico and Barcelona, to name a few — other works capture places and experiences closer to home.

Morris shot the photograph featured in “Painted Crowd” atop the now-demolished parking garage next to the Lawrence Arts Center during a recent Color Run, a race in which participants are sprayed with colored powders.

He originally — and perhaps ironically — took the picture in black and white. Later, Sebelius lent color to the piece by handpainting each of the runners’ faces.

What: "More than Meets the Eye" exhibition

When: The show opens with a reception at 5 p.m. Friday, and runs until June 26.

Another of Morris’ photographs provides the backdrop for Sebelius’ own memories. In one piece, an image of a utility pole is juxtaposed with a couple of wacky, almost grotesque human figures.

The drawings are exaggerated versions of people Sebelius “camped next to” during his time following bikers around Sturgis, S.D. “That’s how they came out in my mind, post-Sturgis,” the 31-year-old explains.

“He uses photography for these moments and memories and feelings, and it’s the same way with me, but I do it with paintings or drawings,” Sebelius says of his friend. “Both of them relate to similar themes, but they’re just done in a different material and a different application. So, I think we’re both touching on feelings of nostalgia and moments of importance.”