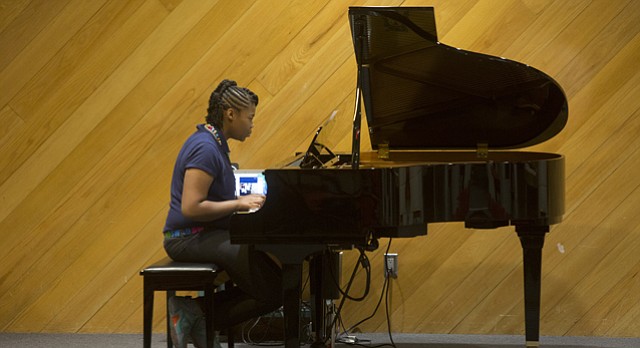 Teneill Childers, 12, a seventh-grader at Eisenhower Middle School in Kansas City, Kan., receives a piano lesson Thursday, Oct. 29, 2015, from Isabel Keleti, a third-year music student at Kansas University, via Skype and special pianos that reproduce the performer’s movements on each instrument. Teneill is part of KU School of Music's Piano Without Borders program that remotely provides kids in need with private lessons.

Teneill Childers is in the middle of her weekly piano lesson at Eisenhower Middle School in Kansas City, Kan., where the seventh-grader plays violin in the orchestra and sings in the choir.

As Teneill moves her fingers over the keys with the kind of slow, measured precision one might expect from a beginner, Isabel Keleti, a third-year music student at Kansas University, chimes in.

Piano is new to Teneill — she’s only about a month in — but Keleti, her teacher, says she’s making progress.

Only Keleti isn’t sharing the piano bench with Teneill. She’s sitting behind an identical instrument just over 40 miles away, in a small room tucked away inside KU’s Murphy Hall.

When Keleti places her foot on the pedals or her hands on the keyboard, the action is recreated on Eisenhower’s piano in Kansas City.

“Very nice. Your scales are sounding a lot better, Teneill. Thank you so much,” Keleti says, her voice as crisp and clear as if she were there in the Eisenhower auditorium with Teneill. 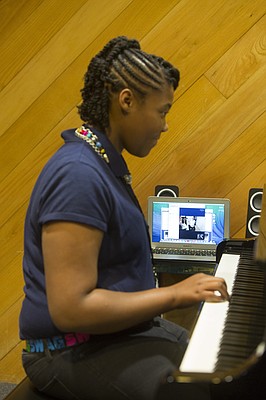 Teneill Childers, 12, a seventh-grader at Eisenhower Middle School in Kansas City, Kan., receives a piano lesson Thursday, Oct. 29, 2015, from Isabel Keleti, a third-year music student at Kansas University, via Skype and special pianos that reproduce the performer’s movements on each instrument. Teneill is part of KU School of Music's Piano Without Borders program that remotely provides kids in need with private lessons. by Richard Gwin

The 12-year-old is one of nine students at Eisenhower Middle School chosen to take part in Piano Without Borders, a groundbreaking new initiative from the KU School of Music that provides kids in need with private lessons using Disklavier technology.

Last spring, KU partnered with the Yamaha Corporation of America and Band of Angels, a Kansas City-based nonprofit that donates used instruments to low-income students, in acquiring the $20,000 Yamaha piano.

“You could put a piano in Outer Mongolia — or anywhere, really, as long as you have Internet — and the keys would go up and down in real time,” says Scott McBride Smith, a professor of piano at KU who’s facilitating the program.

He’s worked with Disklavier technology for about 15 years, but he’s never seen it used quite like this. Pianos Without Borders, Smith says, may just be the first program of its kind in the nation — possibly even the world. 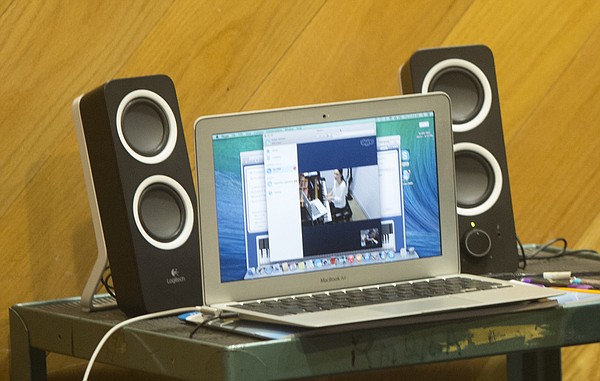 KU music student Isabel Keleti is pictured over a Skype feed while giving a remote piano lesson. by Richard Gwin

The initiative pairs KU music students in need of teaching experience with underserved students who, despite an interest in piano, might not have access to private lessons.

Some students come from families with limited means, says Aimee DeSotel, who teaches band and orchestra at Eisenhower. But the biggest issue facing these kids, she says, is a lack of piano teachers in the area.

Often, parents will call DeSotel asking for recommendations. She’ll tell them, “I know someone down on Eighth Street, or someone that teaches at this church over here or another church over there, but there’s no one close for the kids to get to,” DeSotel says. “They would never have this opportunity.”

Pianos Without Borders by The Lawrence Journal-World

Pianos Without Borders launched about a month ago at Eisenhower. In that time, DeSotel’s already seen a change in her students — those who were shy before have gained confidence, she says.

“It’s going good. Every time I play, it’s a step forward, but it’s a nervous step,” Teneill says a few minutes after wrapping her lesson with Keleti. “I get better every day, and I like that I’m making a lot of progress.”

After working on scales, Teneill, who has only had a few lessons with Keleti so far, takes her first stab at “Lazy Mary,” one of two short pieces she’s hoping to memorize for the Pianos Without Borders recital in December.

Keleti walks her through each measure, offering praise or pointing out minor errors every now and then. With a few years of orchestra under her belt, Teneill doesn’t have much trouble reading sheet music.

The Disklavier “doesn’t feel that different from a normal lesson,” says Keleti, one of 11 KU music students working with Eisenhower kids. The kind of long-distance learning implemented in Pianos Without Borders, she predicts, will likely become more common in tomorrow’s classrooms.

“I’ve realized that it’s important to expose myself to new things and new technologies,” Keleti says. “I think being able to use these new things will make piano learning and music education more accessible and more effective. And that’s really important, too.”

As for the future of Pianos Without Borders, DeSotel and Smith would both like to see it expand at Eisenhower. Right now, lessons are only offered during a four-hour block on Thursday evenings, which Smith says limits the number of teachers available.

Several more expressed interest in the initiative, but scheduling issues got in the way.

When the program was introduced, Eisenhower’s music department asked prospective students to write an essay.

“With some kids, it was just a short paragraph, but you knew the desire was there,” says DeSotel, who received more than 40 applications.

In the end, only nine were chosen, though DeSotel says she could have easily picked five or six more. A handful of kids were so disappointed that they actually shed a few tears, she says.

She’s hoping to fit those students into the program next fall, with more teachers on hand at KU.

“We didn’t know what to expect. We didn’t know if kids would be practicing or if they’d be motivated, and it turns out, they all are,” Smith says. “Now that we see that it’s working, we can really build on this.”