She quickly learned that it wasn’t going to be a romantic activity. Most of the evening involved driving in circles, with me desperately seeking out scenes to frame the moon. I’m afraid she now equates a full moon with car sickness. 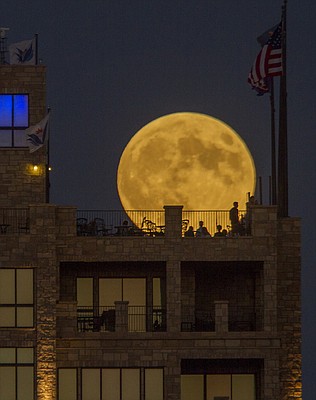 People gather at The Nest on Ninth at The Oread to watch a harvest moon, a full moon nearest the September equinox, come up Sunday night, Sept. 27, 2015. Later there was an eclipse of the moon which has led many to call this event a rare super blood moon. This combination of events won't happen again until 2033. by Mike Yoder

A full moon rising presents challenges for a photographer. First of all, the moon moves quickly in relationship to foreground landmarks in your frame. And the longer the focal length of your lens, the faster the moon will move through the frame.

I had a telephoto lens of around 400mm, mounted on a tripod. When we pulled into a parking lot behind Kansas University’s Carruth-O’Leary Hall, we were high above Lawrence and had a great view of the harvest moon above the eastern horizon.

The Oread Hotel was also to the east, between us and the moon, and at about the same height as we were. I realized the moon lined up with the top deck of the hotel if I shifted my position a little. But by the time I set my tripod and framed the scene the moon had already moved higher.

To give myself another opportunity at the same shot, I ran down the hill to a spot that would recreate the same angle. This time, as the moon again cleared the top of the Oread, I was ready. Soon I realized my second challenge. The moon is very bright.

To the naked eye, the moon and the hotel were clearly legible, but in my exposures the moon was so much brighter it washed out all detail. As I reduced my exposure setting I correctly exposed for the moon leaving the hotel underexposed. Now I recognized I could silhouette people on the top of the hotel against the brighter surface of the moon. My exposure on the moon over The Oread was 1/250th shutter-speed, f4.5 aperture and ISO 500. 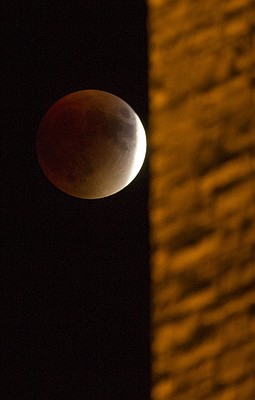 A blood moon moves behind the illuminated stones of the Campanile on the Kansas University campus Sunday night, Sept. 27, 2015. by Mike Yoder

Since the eclipse was the big event of the night, my wife and I next drove around searching new scenes to include with the blood red moon. I settled on the Campanile at KU.

By the time of the eclipse, the moon was higher in the sky, so the height of the Campanile ensured that I would be able to keep the moon framed against the Lawrence landmark. I wanted to make the moon larger in the frame, so I used only a side of the Campanile’s illuminated stone surface. In eclipse, the moon was much darker than my foreground object and my exposure was 1/40th shutter-speed, f2.8 aperture and ISO 1600. 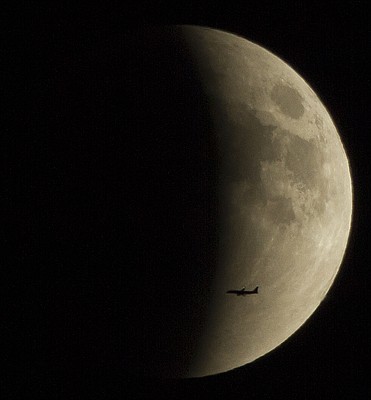 A plane is framed against the eclipsing moon Sunday night, Sept. 27, 2015. A harvest moon and the blood moon eclipse has led many to call this event a rare super blood moon. This combination of events won't happen again until 2033. by Mike Yoder

I got three photographs that night, and the most unusual is the one that captured an airplane against the moon at the halfway point of the eclipse.

When I first reviewed my images on my computer I told my wife I thought I had a large piece of dust on my camera sensor on one frame. When I enlarged the image and saw the plane I was stunned. I may have even howled. Complete and total luck. The exposure was a shutter-speed of 1/500th, f5.6 aperture and ISO 500.