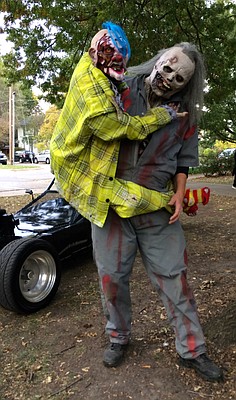 Time in Lawrence: Worked in Lawrence a long time — about 20 years, off and on

Occupation: I work with people with disabilities

Dream job: I'm doing it right here. I'm a character actor — that's what I do on the side.

How long did you spend prepping to look your zombie best? We prepare for years for this. A lot of work goes into these costumes. I'm a bigger guy so nothing is made for me — everything gets tweaked. It's a yearly endeavor.

Favorite zombie movie: Gotta be back to the original "Night of the Living Dead." It's gotta be classic. This running zombie stuff isn't for me.

Fashion influences: Feldmans Farm and Home, I guess? It's about living life and having fun and being outside the box. When I take this off people look at me and I go to my day job, and they're like, "I would never know." That's the cool part about it.

What’s a major zombie fashion faux pas? No blood. Zombies don't do blood unless they're feasting. Zombies are dead.

From a zombie’s perspective, what are the best and worst things about Lawrence? The community support is the best by far. A lot of people don't even know (this event is) for the Humane Society unless they read the T-shirts or really read into it, but I like the community involvement around Lawrence. Worst: I can't think of anything. It's a fun town.

What’s your spirit animal? I'm gonna have to go with a dragon — he flies and he shoots fire.

Whom do people say you look like? Several people — I guess I just look like an old, 56-year-old guy.

Tell us a secret: I have found that life is really too short, and for those who don't believe it, experience it. … Make the best of the time you have.