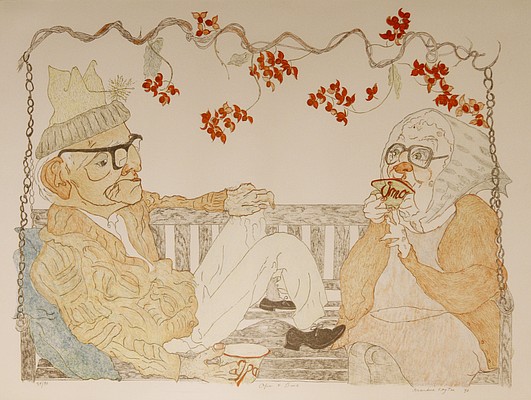 A collection of 50 drawings by the late Kansas artist Elizabeth Layton, donated to the Lawrence Arts Center 20 years ago, have been gifted to several art museums across the country.

Don Lambert, who first discovered her 37 years ago, proposed the idea of finding new homes for the donated pieces. He and Lawrence Arts Center CEO Susan Tate agreed that the move would mutually benefit Lawrence and communities throughout the U.S.

“Elizabeth Layton created a stir in the art world,” said Ann Evans, the first director of the Lawrence Arts Center, in a news release. "We had several exhibitions of her works in the old building and one in the new building. The decision to move the drawings, one I agree with wholeheartedly, will help spread her many messages and her rare talent." 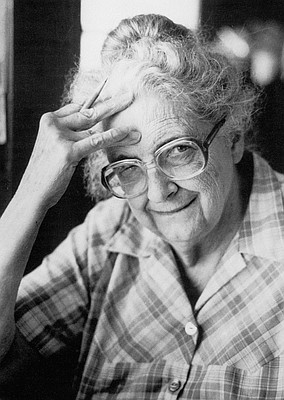 The drawings will now reside in the collections of such high-profile institutions as the Whitney Museum of American Art and the American Folk Art Museum in New York City, the Art Institute of Chicago, the Detroit Art Institute and the St. Louis Art Museum.

Elsewhere across the state, drawings have gone to the Birger Sandzen Memorial Gallery in Lindsborg, the National World War I Museum and Memorial in Kansas City, the Kemper Museum of Contemporary Art in Kansas City and the Franklin County Historical Society in Ottawa.

“Grandma” Layton, as she was also known, was born in Wellsville in 1909. After a 30-year struggle with depression, Layton found a “cure” when she learned to draw at age 68.

Her one-person exhibitions were featured at nearly 200 art museums and arts centers across the country, including the Smithsonian Museum of American Art. Layton died at age 83 in 1993.

What a wonderful gift to the world! One of her pieces, "Remembering Names", was turned into a poster that became part of my AIDS-awareness poster collection, which I eventually donated to Spencer Research Library at KU.

I also sent a framed copy of that poster to Seattle AIDS Support Group right around the time they started a group for mothers of people with AIDS. I was told later that they hung the poster in a stairway that the mothers used when they had their group's meetings and they all loved it.