The artistic achievements of the 2015 Phoenix Award winners

Now in their 20th year, the Phoenix Awards annually recognize outstanding artistic achievement in the Lawrence community, as chosen by the Lawrence Cultural Arts Commission. 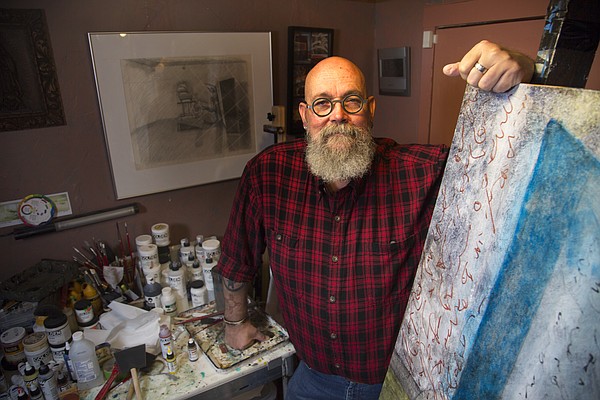 Marty Olson stands in his studio at 416 E. Ninth. Many of the paintings and prints he creates there are displayed in his hair salon, Do's Deluxe, which he's owned for nearly 40 years and resides in the same building as Olson's art studio. by Richard Gwin

When Marty Olson’s father, longtime Weaver’s display manager Orrin Olson, suffered a major heart attack in 1972, the young artist took some time off from school and moved back home to Lawrence.

Marty, who at the time was studying art on scholarship at Northwest Missouri State University, figured he’d help his dad — a prolific artist in his own right — with the window dressings, just until Orrin could get back on his feet.

But, with the country in the middle of its first major recession since the Great Depression, Weaver’s wouldn’t hire him.

That’s when, at the suggestion of a hairdresser friend, Marty started cutting hair.

“I say to people, ‘Somewhere along the line, 43 years later, I might find a career in this,’” jokes Olson, 63. “But it’s been a real blessing to me, to have this as my source of income, and I can still pursue my art endeavors.”

For nearly four decades, Olson has owned and operated Do’s Deluxe salon at 416 E. Ninth St. The modest building, tucked away in a tree-lined East Lawrence neighborhood, houses both Olson’s salon — where he often displays his own paintings and prints, as well as works from local and regional artists — and his art studio.

In this sense, writes Deb Stavin in her nomination of Olson, Do’s Deluxe “is indeed a salon” where his customers have the opportunity to casually converse with the curator — and artist — himself.

Olson, who has also designed sets for the Lawrence Arts Center’s “A Kansas Nutcracker” and created seasonal displays for Hobbs, says he dreamed of becoming an artist from the moment he first picked up a pencil.

In his younger years, he thought about becoming an art professor. Dropping out of college after two years officially put an end to those plans, but these days, Olson is still teaching, in his own way.

Whenever he encounters a beginner intimidated by a blank canvas, he tells them, “just throw something at it.” Make your mark on the surface, Olson says, and get the conversation started.

“It’s all about process and being fearless. Don’t feel like it’s perfect halfway done, you know, because it sure isn’t,” the artist says with a laugh, poking fun at his own work. “That’s how I’ve probably grown through the years — to accept and expect change.”

Olson’s longtime customers shouldn’t expect things to change around the salon too much in the coming years. “Retirement is not a part of my vocabulary,” Olson says, though he’ll probably reduce his hours to part-time once he hits 66 and collects social security.

“I’m thinking maybe a three-day work week sounds good right now,” he says optimistically. “But I’ve got to hang in there.” 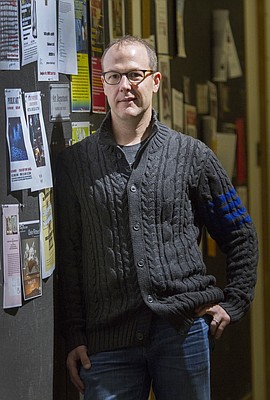 John Derby, an assistant professor of visual art at Kansas University, is the recipient of this year's Phoenix Award in the Art Educator category. by Mike Yoder

Growing up in Ohio, John Derby never felt a sense of true belonging at school, with one classroom proving the exception.

“The art room was always a place where I felt like I was completely accepted as a person,” says Derby, who teaches visual art education at Kansas University. “And I found as a teacher the same thing to be true, that it really is a place that appeals to a wide variety of students — from those planning to go to prestigious universities, to those planning to go immediately into work afterward.”

It’s also, he says, a valuable tool in teaching those with disabilities.

Derby should know. As a kid, he witnessed his grandfather, whom he describes as a major role model in his life, struggle with debilitating mood swings that often landed him in the hospital. Treatments — including electroconvulsive therapy — were ineffective.

Derby’s grandfather was “manic depressive,” a condition we now recognize as bipolar disorder. He wasn’t the only member of Derby’s family living with mental illness — Derby himself experiences forms of depression and anxiety, he says — but until studying disabilities as a doctoral student, it’s something he couldn’t quite grasp.

At KU, Derby’s research bridges art and his specialization in disability studies, which examines disability as a social construct and recognizes those with disabilities as “fully human” with their own unique culture, he says.

“People who experience mental disability, even those who experience it to the level that requires institutional placement, still have experiences that are valid and real,” Derby says. “And ultimately, from an art education standpoint, that I think are worth expressing in art.”

Outside the classroom, “Derby is an advocate for artists and art students and seeks to expand the opportunities that are offered for recognition of their work,” writes Lesle Knop in her nomination.

Since 2013, the assistant professor of visual art has served as a volunteer juror for the Catholic Fine Arts Council’s Archbishop’s Invitational High School Art Exhibit, “giving his time and expertise” to establish the program that last year drew 63 applicants from seven Catholic high schools in northeast Kansas.

He’s also a musician (Derby sings in the local Sursum Corda ensemble as well as the St. Lawrence Catholic Campus Center choir) and athlete who counts a recent a 100-mile “ultra marathon” as one of his proudest accomplishments.

Still, Derby says, most of “everything that I am that I feel good about” comes from his students.

“In wanting to connect with your students, you realize that what you have to do is listen to them, pay attention to them,” he says.

Sometimes, when faced with a cultural or economic barrier, this process can take a lot of effort. But for Derby, it’s worth it. 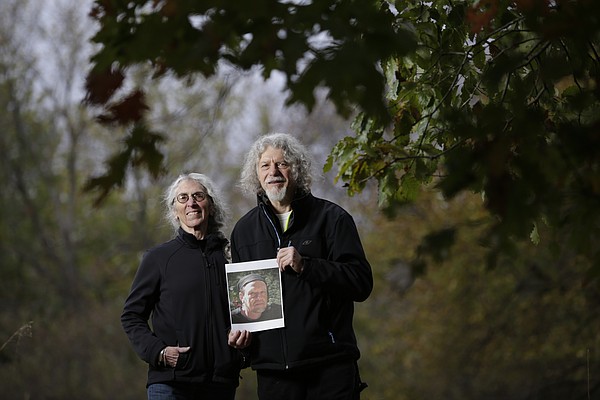 Laurie Ward and Rick Mitchell along with Paul Hotvedt (pictured in photo held by MItchell and currently living in Silver City, N.M.) formed the Committee on Imagination & Place in 1999. The group won a Phoenix Award this year in the Creative Spaces category. by Mike Yoder

Committee on Imagination and Place

In Jerry Jost’s nomination letter for the Lawrence-based Committee on Imagination and Place, the acting executive director of the Kansas Land Trust suggests that the collective be considered for an award in the Creative Places category.

The committee, Jost acknowledges, is not an actual place.

But in the 16 years since its founding “to consider ideas related to human imagination and concepts of place,” the I&P has “created a wide range of public conferences, seminars, exhibitions and publications that have explored the very nature of creative spaces, thus contributing to the awareness and language that makes recognition and appreciation of such spaces possible.”

And yet, founding member Rick Mitchell says, “we didn’t really think of it that way” when he, along with Laurie Ward and Paul Hotvedt, created the committee in 1999.

Originally, the I&P was a collaboration between the Lawrence Arts Center, Cottonwood Literary Review and the Kansas Land Trust. The initial goal, Mitchell says, was the organization of the first Kansas Conference on Imagination & Place, which explored the then-emerging field of “hypnogeography,” or the landscape of dreams.

In those early years, the committee put out a call asking for write-ups on dreams and place. The resulting “Dream Archive” was published soon after, and is still available on the I&P website.

These days, Mitchell says, there’s a lot of talk — both on the local and national level — about creative placemaking, a conversation that took place years ahead of the curve at I&P gatherings.

“The committee was really doing some seminal work in bringing people together who were interested really early on in this concept,” he says. “So being recognized by the arts community in the category of creative places, I think, is particularly gratifying for us.”

Of course, there’s more of “us” in the committee 16 years later. What started among a trio of friends in 1999 has grown into a multidisciplinary coalition of nearly 20 members. As of 2015, that roster includes Spencer Museum of Art director Saralyn Reece Hardy, former Kansas Poet Laureates Caryn Mirriam-Goldberg and Denise Low, and architect Steve Clark, among others.

The committee, which in 2009 became a free-standing organization, has in recent years devoted more attention to its publishing efforts. Right now, major projects include an oral history of The Merc as well as an expanded website that will provide an outlet for reviews, essays and visual art portfolios related to place.

The redesign should be up and running by mid-November, Mitchell says.

What’s kept the Committee on Imagination and Place going, he says, is the core group of members who have met once a month since 2001.

“They all bring their background and experience to the conversations. There are so many different, deep ways of looking at the development of our ideas about places — everything from geography and geology to the arts,” Mitchell says. “It’s a topic that keeps on giving, and I think that’s part of the reason we’re still together.”

Congratulations to all recipients, but most especially to the splendid Marty Olson.