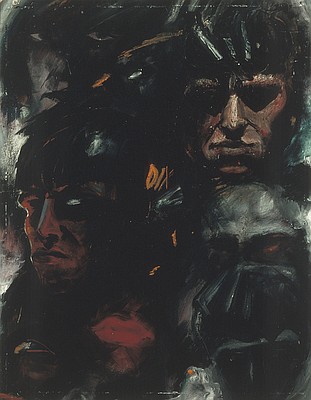 In 1910, a young Otto Dix had just entered his first year of study at the Dresden Academy of Fine Arts.

By fall 1915, after enthusiastically enlisting in the Germany army, Dix was serving as a machine gunner and platoon commander in the battlefields of France, Flanders, Russia and Poland.

Just three years later, Dix had witnessed — and taken part in — some of World War I’s most harrowing chapters, including a near-fatal wound to his neck that ultimately led to his discharge from the army in 1918.

His experience as a soldier — which he chronicled throughout the war in his diary and sketchbook — became the basis for much of his artwork, including a 1914 self-portrait chosen by the Spencer Museum of Art as the 2015-2016 Common Work of Art at Kansas University.

Dix’s “Self-portrait” has been selected in conjunction with the 2015-16 Common Book, “A Farewell to Arms” by Ernest Hemingway, which was provided to all first-year students during KU orientation and will be the subject of several activities throughout the academic year.

“The goal is to have opportunities for these kinds of intellectual, common-learning experiences where students can have discussions about these issues that are still so current,” says Celka Straughn, the Spencer Museum’s director of academic programs.

Whether Dix produced “Self-portrait” before or after the outbreak of World War I in 1914 remains unclear, says Straughn. But the painting still presents a number of complex topics — including questions of personal identity and the continued legacy of World War I — that she hopes students will relate to.

After all, she points out, Dix wasn’t much older than today’s KU students when he painted “Self-portrait.” At the war’s onset in summer 1914, Dix was just 22.

Dix’s “Self-portrait" depicts about seven faces, though two figures stand out prominently among the darkness, their features illuminated by what looks like a glowing, red light.

Only those two faces, located in “the crosshairs of the painting,” appear to be self-portraits, says Stephen Goddard, Spencer Museum associate director.

“To me, it’s the likeness that seems to bring up both a powerful resolve and a sense that you can’t go back,” Goddard says.

At discussions about “A Farewell to Arms” in the KU residence halls last month, Straughn says students asked what would motivate Hemingway’s protagonist — and by extension, Hemingway himself, who famously based the book on his own experiences serving in World War I — to enlist in the midst of such a brutal conflict.

Goddard says Dix, like many young men at the time, may have been guided by a “miscalculated” sense of optimism. In Europe, there was a widespread conception that the war would be a short and simple resolution to the territorial, political and economic conflicts among the continent’s great powers that had plagued Europe for decades, he says.

That, of course, wasn’t the case. World War I lagged on until November 1918, and ultimately resulted in the deaths of more than 16 million soldiers and civilians.

But the sheer terror of war is also what drew Dix to it, Goddard says. At least, that’s what the artist admitted years later in an interview when he said, “You have to have seen human beings in this unleashed state to know what human nature is.”

In previous years, the museum has hosted discussions and other events built around the Common Work of Art. The chances of that happening this year, Straughn says, are slim, though she hasn’t ruled out the possibility yet.

With the Spencer Museum’s galleries closed for renovations until a tentative mid-2016, Straughn hopes students will view the painting via Spencer’s website, which also offers access to several Dix works on paper as well as some Hemingway-related images.

Dix’s painting, she and Goddard agree, is a link to our past that can help us understand our present and hopefully, create a more peaceful future.

“I think it’s important to experience it from original material as much as possible, such as painting or writings from the time,” Goddard says of the war. “The conflicted attitudes and difficulties of being in that situation, I think for many — certainly in the second year of the war — seemed unclear why people were fighting. Those are lessons we probably can’t repeat often enough.”