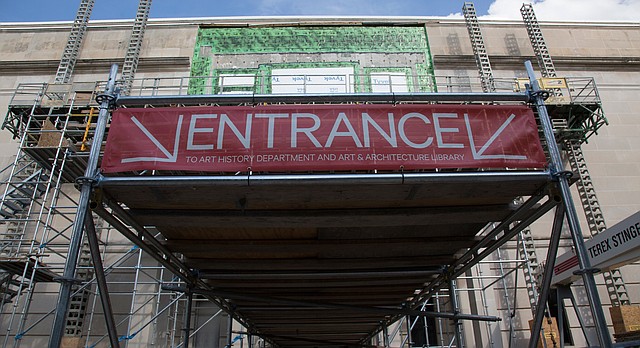 The west entrance of Kansas University's Spencer Museum of Art is covered with scaffolding as work on a total renovation of the museum continues Wednesday, Sept. 16, 2015.

Thanks to contributions from nearly 200 donors, the effort has raised $7.4 million for the museum, KU announced Wednesday.

Phase I of the Spencer’s renovation will transform the museum's lobby area, including adding glass through which visitors can view Marvin Grove outside. It involves a total of 30,000 square feet of the museum’s galleries, teaching and research facilities, gathering spaces and collections storage.

According to KU, the additional money will allow the museum to improve more gallery and public spaces, as well as address several longstanding accessibility and infrastructure needs.

The Spencer closed for construction in April, and galleries are expected to reopen in 2016. This is the first broad renovation of the museum since it was built in 1977.

More than $5.8 million of the $7.4 million raised was donated by 11 “leadership donors” in the form of gifts ranging from $100,000 to $1.36 million, according to KU. Members of the Spencer museum’s national and local advisory boards contributed nearly 40 percent of the total funds raised.

According to KU, recent major donations to the Spencer campaign include gifts by Sam and Connie Perkins, Olathe; Pam and Dolph Simons Jr., Lawrence (Dolph Simons is editor of the Journal-World); M.D. Michaelis of Emprise Financial Center, Wichita; and Linda and John T. Stewart, Lawrence and Wellington.