Around 30 people gathered in the small, sun-lit conference hall of the Hall Center for the Humanities on Tuesday afternoon to hear 2014-2015 Simons Public Humanities Fellow Angela Elam discuss the impact of narrative in storytelling, particularly in public media.

It was a fittingly intimate crowd for Elam’s presentation, “The Power of Narrative: From Poetry to Podcasts,” which included excerpts from her interviews with writers David Sedaris, Natasha Trethewey and Luis Alberto Urrea.

Elam, the producer and host of KCUR’s nationally syndicated “New Letters on the Air” radio literary program, has spent the last year interviewing various Kansas writers and visiting Hall Center authors as part of her fellowship at KU.

“That’s one thing about radio — it’s so intimate,” Elam said. “When you hear it on the radio, you forget that there’s an audience. It just sounds like two people talking, and that’s the thing — you’re joining them at the table.”

Even as a little girl, Elam had a “gift” for listening, she recalled to her audience Tuesday. It’s a habit she’s employed frequently in her nearly 30-year career in public radio, a field — much like the journalism industry as a whole — that she said is now “grappling with new media” and finding new ways to keep listeners engaged. 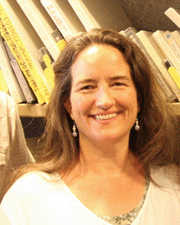 Angela Elam, the 2014-2015 Simons Public Humanities Fellow, discussed the power of narrative in storytelling, particularly in public media, during her presentation Tuesday at the Hall Center for the Humanities.

During her presentation, Elam noted the lasting influence of “This American Life,” the long-running weekly radio program that she said changed the industry with its mix of light-hearted features, essays, short fiction and oftentimes hard-hitting pieces of journalism, all delivered in a conversational tone.

She also remarked on the popularity of the 2014 “This American Life” spinoff “Serial,” in which producer Sarah Koenig investigated the 1999 murder of a high-school student in suburban Baltimore. As part of her fellowship, Elam attended a journalism conference in Boston earlier this year called “The Power of Narrative" where Koenig was a speaker, which ultimately inspired the name of her presentation.

Koenig’s program, she noted, is very informal in its delivery, almost as if the host is casually sharing her findings with an old friend. It all works, and so does Elam’s “New Letters on the Air,” which she describes as a “more formal, old-style public radio show.”

One of her favorite recent interviews, a chat with Natasha Trethewey recorded during the former U.S. Poet Laureate’s KU visit in March, showcased Trethewey’s nonlinear storytelling.

“I am a little bit afraid of my own tendency for a kind of pedestrian narrative poem,” Trethewey told Elam. “So I try to use the elements of lyric to tell a story in a different way.”

In the “New Letters on the Air” clip Elam shared Tuesday, Trethewey reads a passage from “Native Guard,” her 2007 Pulitzer Prize-winning collection of poems that pays tribute to both her late mother and the black Union soldiers who guarded Confederate prisoners on Ship Island, Miss., during the Civil War.

It’s a mixture of Trethewey’s personal history — growing up biracial in the South with a black mother and white father — and those soldiers that never quite got their due in American history. The result, which jumps deftly between two eras, is powerful, Elam said.

“One thing I have learned in my nearly 20 years of interviewing writers is that there’s no one way to tell a story, and there’s no one approach at all,” she said.

“Except for one thing — you gotta get your butt in the chair,” Elam quipped, eliciting chuckles from the audience. “That’s the main thing.”

The Simons Fellowship Program was made possible by a gift from the family of Dolph C. Simons Jr., the editor of the Lawrence Journal-World, with matching funds from a National Endowment for the Humanities Challenge Grant. The fellowship is meant to give accomplished individuals from outside the university the time and freedom to re-engage with humanities-based learning.