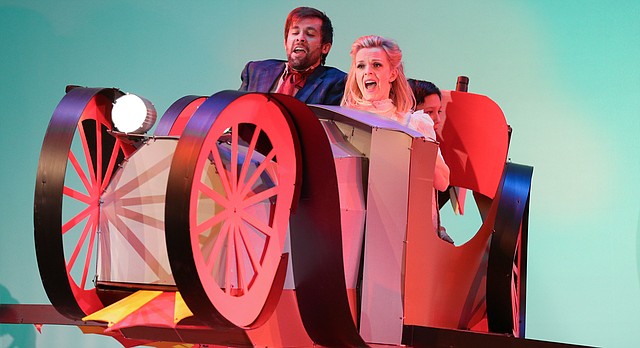 Actors Tom Picasso, playing the part of Caractacus Potts, and Breanna Pine, playing the part of Truly Scrumptious, hold on as Chitty Chitty Bang Bang's wings take them into during a dress rehearsal for Chitty Chitty Bang Bang on Wednesday, Feb. 17, 2016 at the Lawrence Arts Center. The musical, which is directed by Ric Averill, opens Friday at 7:30 p.m.

This weekend in Lawrence: a "truly scrumptious" musical makes its Lawrence Arts Center debut, model-train enthusiasts congregate at the fairgrounds, chili (with the fixin's) is ladled out at the American Legion, and Douglas County CASA gets in the groove with a Zumbathon.

The stage musical, for those who missed the 1968 film adaptation, loosely follows Ian Fleming’s original tale of an oddball inventor and his children whose magical, flying car transports them through a series of harrowing adventures.

The show runs through Feb. 28 at the Arts Center, with the first performance slated for 7:30 p.m. Friday. Tickets range from $10 to $25, and can be purchased at www.lawrenceartscenter.org or at the Arts Center box office. 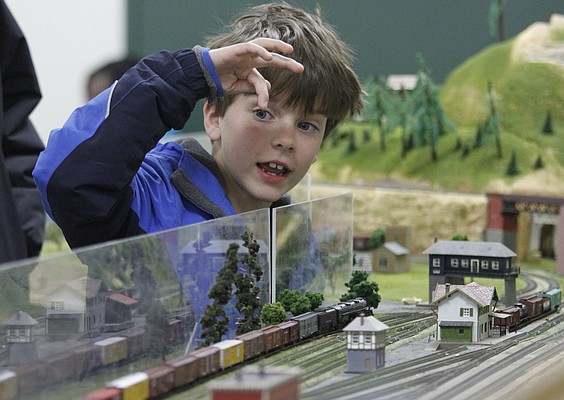 Ian Murphy, 8, Lawrence, counts the number of cars on a train as it passes him by at the 12th annual Lawrence Model Railroad show and swap meet Saturday, Feb. 16, 2013 at the Douglas County Fairgrounds. by Mike Yoder

The Lawrence Model Railroad Club returns to the fairgrounds with its 15th annual show and swap meet. Among the attractions: train layouts, vendors, a silent auction, door prizes, concessions, the popular (train) model contest and more.

Admission is $6 for adults; children 12 and under are free with a paid adult. Guests who bring canned food donations for L.I.N.K. will receive a $1 discount per admission.

For more information, including entry forms for the model contest, visit www.lawrencemodelrailroadclub.org.

Chili Feed at the American Legion 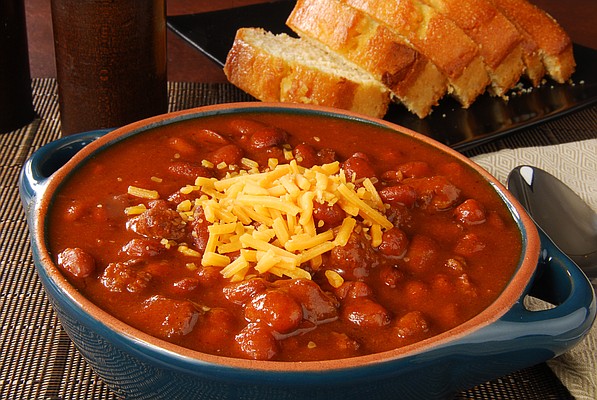 Chow down for a good cause Sunday at the American Legion, where the Lawrence Breakfast Optimist Club is serving up homemade chili to benefit local youth.

Fiesta Z Fitness is inviting folks to “dance for kids” at this weekend’s one-and-a-half-hour Zumbathon at Bishop Seabury Academy.

Eight area Zumba instructors have signed on to lead the fundraiser, which benefits Douglas County Court Appointed Special Advocates (also known as CASA). If that’s not enough to hook you, there will also be door prizes.

Tickets (children 12 and up are welcome) cost $10. Participants can register online at www.dccasa.org or at the door.