2015 saw a lot of electrifying activity in the Lawrence music scene.

New bands came out of nowhere, roused all the ruckus, and revamped the scene with one mind-blowing set after another. Guitarists thrilled, rappers stimulated and screaming vocalists raised the hair on the back of everyone’s necks — and nearly all of them grew out of the DIY scene.

It’s been an exciting year for music, but the past few months have really just acted as a buildup to what is sure to be a very showy 2016. Here are some bands that spent 2015 establishing their identities in Lawrence, and should be watched carefully over the next year. 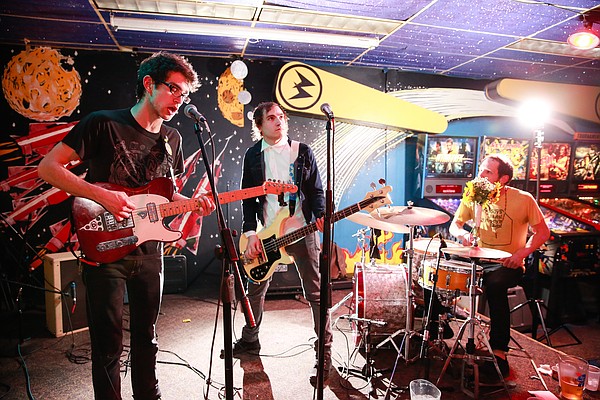 You’d think a music scene would tire of a band that plays at least once a week (sometimes at the same venue, even). But Arc Flash is no ordinary band.

The duo has produced some of the wildest, most outrageous performances of 2015. James Thomblison and Mark Osman have, together, united the scene in a confederation of calamity. Arc Flash isn’t a band that just gets up and plays a show — they throw the audience into a frenzy. What’s impressive is that the frenzy they conjure up at every show only grows stronger week after week. These guys could play a million times and nobody would get sick of them. Arc Flash shows are where scenesters go to let loose. They throw all their inhibitions away and assault every square inch of the venue. We’ve seen fans throw themselves onstage, beat on the drummer’s kit, and even throw both members into the crowd for some crowd surfing.

The space punks spent 2015 touring nonstop and they’ve got big plans in 2016. You can expect to see them on some festival stages (like SXSW) at the very least. They’re completely unpredictable and insatiably hard-working. They turned Lawrence on its head last year. Now it’s time to take over the rest of the nation.

Real Adults is one of those bands that came together with an all-star cast of locals (this was a running theme this year with bands like Debra and Psychic Heat’s recent lineup change).

You can’t miss frontman Garrett Marsh. The guitarist and vocalist clocks in well over 6 feet tall and has been a driving force behind the front-row excitement of most local shows. He brings that same infectious energy to his own act here, making wild eyes and expressive faces at the audience while he noodles around on the guitar.

Real Adults is a little more on the experimental side, with a hint of psych rock and vocals that dabble in various yelps and noises. The band is enjoying its time free of boundaries, switching to any genre they please. Their willingness to experiment without end could be what keeps their audience highly intrigued in 2016. 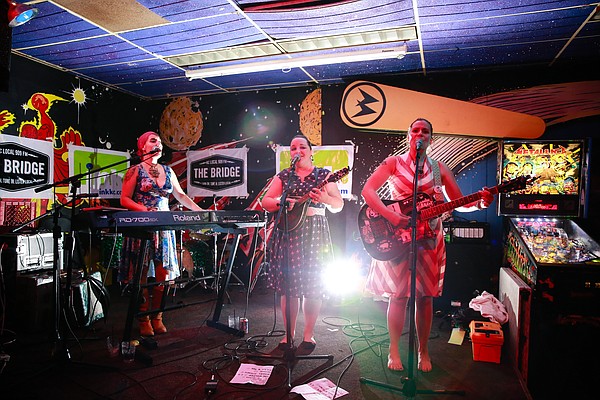 From the moment they stepped their bare feet onto the stage, audiences positively adored Sugar Britches.

The four (sometimes five) female folk musicians are clever, cheeky and (most importantly) quite crass. It feels like fans come to their show just to blush at all their tales of drunken debauchery and sexual innuendo. But it’s hard not to fall for them as they’re charming as heck.

These musicians can draw a crowd anywhere. We’ve seen them rock venue stages, but sometimes their biggest reactions come from crowds that gather around them while they’re busking on the street or playing unconventional venues like the Community Photo Studio. The release of their first album over the summer saw a sizable crowd that overflowed the Replay at their release show, and we don’t see them slowing down at all. The town fell for these britches hard in 2015. As a result, in 2016 they’re going as far as their doting audience will carry them.

When it comes to Milkdrop, all the proper pieces are in place.

Talented lyricist with a steady stream of single releases? Check. A powerhouse consisting of one of the most recognizable hip-hop acts in town (Approach) proudly sporting his support? Check. Cameos in sets before Stik Figa and Talib Kweli? Check.

The ingredients are there. Now it’s time to marinate. If Milkdrop keeps the momentum high, he’ll be fairly recognizable in the coming year.

It’s been a little agonizing waiting for CJ Calhoun to come around with his solo act. The local musician has only been playing sparingly as Bonzo Madrid, and generally played alone onstage. But once the crooner was satisfied with his product, he gathered a band to back him up at a Bottleneck show in early December. This resulted in a breathtaking performance that was well worth the wait.

Calhoun’s talent is irritatingly stupendous. It’s hard to believe someone completely capable of writing perfect R&B songs worthy of radio play has been right under our noses for months (years, really). It just took a little coaxing and the right opportunity for Calhoun to finally grace everyone with his impressive musical presence.

His shows were few and far between in 2015, but the ambition has built up enough to get him on more stages. You’ll want to come to see his wizardry in looping, but stay for his fascinating falsettos and completely enticing soulful sound. 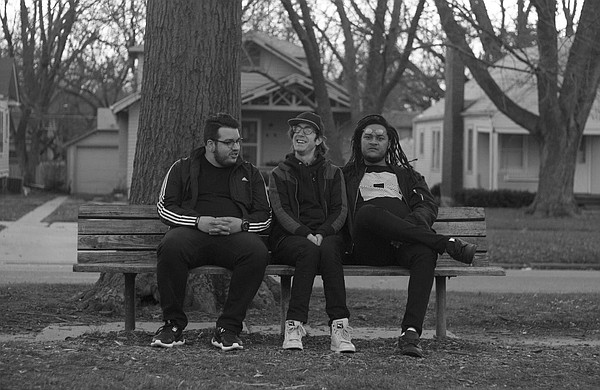 From left, Nathan Giesecke, Daniel Smith and Marty Hillard make up Lawrence hip-hop group Ebony Tusks. The band will be performing at 8 p.m. Saturday at the Granada, opening for Talib Kweli.

Going to an Ebony Tusks show is like going to church. It’s where people go to get inspired. Marty Hillard plays the role of the preacher, delivering (shouting, actually) words of encouragement from every corner of the venue. He brings solidarity to a conflicted crowd while at the same time intimidating them.

Hillard is by no means new to the music scene, but 2015 has been a year of buildups for Ebony Tusks. His onstage presence got considerably stronger, he actually ventured out-of-state to tour, and his shows are never short of audience members. The rapper has everyone in the palm of his hand right now. Since his every move is well-thought-out and calculated, we’re on the edge of our seats waiting to see what his next big maneuver will be.

It was important to catch Wides early on. There are endless possibilities and turnouts that could happen with this act.

The experimental band is fronted by Paper Buffalo’s drummer (a band the scene sorely misses about now). The man is an animal, screaming his head off in an acceptably unnerving manner while terrorizing his guitar.

The psych rock influences are there, as are the hardcore rock ones. But what’s fascinating about Wides is that the band reminds every experienced musician in town of themselves at early stages in their musical careers. This means there are any number of ways this act could go. Will they snag the Whatever Forever crowd? Perhaps they’ll be a Replay favorite? Right now, they’re staying super underground, sticking to DIY gigs and house shows with punk bands. But it’s the opportunity that lays ahead for Wides that has us fascinated. There are several different yellow brick roads the band could go trotting down. Now, we watch and see which one they choose. 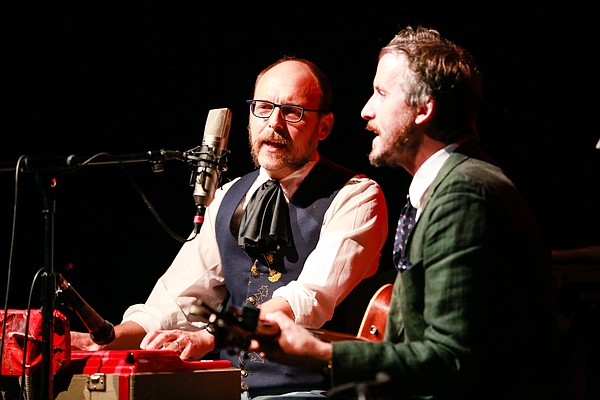 Up until the summer, Jeff Stolz was one-half of the unforgettable and incredibly loved folk duo Drakkar Sauna. But when one member boarded a plane for Hawaii, the other kept soldiering on. Stolz has lately been making appearances at Decade coffee shop over in the Warehouse Arts District. Sure, he’ll play a Drakkar Sauna tune here and there. But he’s also producing solo material and playing regularly. People tend to turn up for his shows, no matter how small the space is.

The scene is fond of his work, and he’s not likely to take a break from music anytime soon. 2016 could be the year Stolz gets the ball rolling on his own projects. Even if he continues playing smaller shows in dark corners of the town, the audience will always be there.