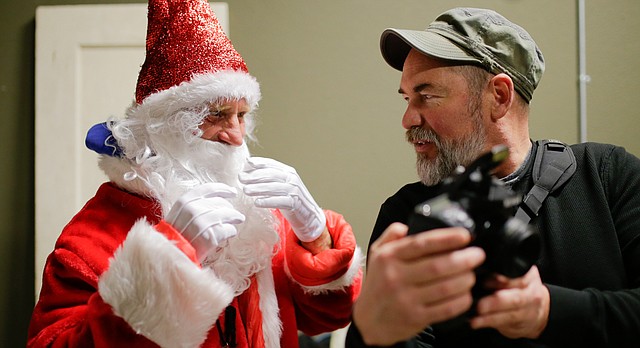 Dennis Abbott and John Clayton converse while reviewing shots at their annual Santa Claus photo shoot. Clayton is the photographer behind the popular The Friends of Dennis Facebook page, which documents Abbotts' zany outfits and everyday interactions.

Dennis Abbott is a model — at least today, anyway.

It’s about a week before Christmas, and the legendary local personality is busy at work at the Lawrence Community Photo Studio, where he and longtime friend John Clayton are collaborating on their annual holiday-themed photo shoot.

Clayton may be the photographer, but make no mistake, he says: Abbott’s the one in charge here.

Abbott, dressed in a Santa suit complete with beard and glittery hat, isn’t particularly concerned about working around his client’s schedule. He also has his own ideas about art direction (he wants to wear the costume’s boots, but Clayton, reminding Abbott that his feet won’t show up in the final product, convinces him otherwise) and charges a steep fee for his services. 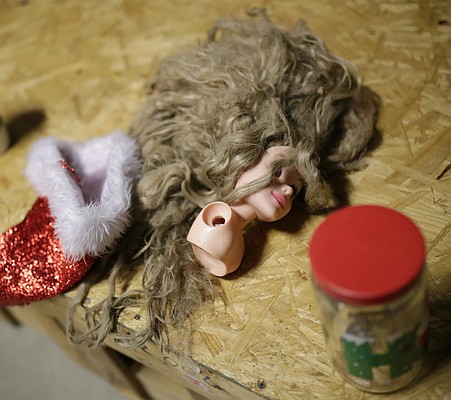 Some of Abbott's personal belongings that he brought to the photo shoot. by Nick Krug

Dennis Abbott and John Clayton converse while reviewing shots at their annual Santa Claus photo shoot. Clayton is the photographer behind the popular The Friends of Dennis Facebook page, which documents Abbotts' zany outfits and everyday interactions.

“Big ‘ol 10 bucks for that,” Abbott instructs Clayton after wrapping the photo shoot in just more than five minutes. He has another appointment to make, this time with a hot dog and the friendly carhops at Sonic.

Clayton says he only has $7. Abbott looks dubious, but takes the payment anyway, leaving his friend the Santa costume before heading out into the crisp late-December air, his signature cart and Sheryl doll — well, one of them, anyway — in tow.

“This is a crucible in which you really learn how to shoot,” Clayton, 54, says afterward. “Everything about him is in the moment. If you’re not present, you get nothing.”

John Clayton is the mastermind behind The Friends of Dennis Facebook page, which for three and a half years has documented the zany outfits and everyday interactions of Lawrence’s “sweetest grouch and most brilliant stylist.”

Most of the photographs are Clayton’s, though the page’s many followers sometimes contribute their own snapshots of Dennis making crafts with a local Boy Scout troop at the fairgrounds, for example, or ringing bells downtown with Salvation Army volunteers.

The Friends of Dennis originated in summer 2012, when Abbott’s beloved Sheryl mannequin (the Lawrence native is a big fan of Sheryl Crow) went missing. Clayton and a photographer buddy created the page to mobilize search efforts, but even after Sheryl’s safe return, Clayton kept up with the project.

It’s since grown tremendously, and, as of press time, Dennis’ “friends” are numbering around 6,000. But Clayton’s not surprised by the fandom, if you want to call it that, surrounding The Friends of Dennis.

“Not at all. Because if you know him, you know he can be difficult, he can be awkward, but he’s a sweetie,” Clayton says of his muse. “He’s one of the most genuine, enjoyable, fun people I know. And anybody who works downtown and has gotten to goof around with him and see how he is when he’s teasing and playful and happy … you love that. You feed off that.”

'All you gotta do is ask'

Perhaps Abbott isn’t much different from the clouds, butterflies and other fleeting creations of Mother Nature that inspired Clayton to pick up photography nearly a decade ago — “He’s kind of a like a flower,” Clayton says. “He just blooms every day in some weird way or another.”

In 2008, Clayton was running a care agency for people with disabilities in Kansas City when he lost most of his vision to a form of cataract. The ensuing surgery allowed him to see the world, literally, through new eyes — or lenses, really — and Clayton, upon receiving a camera from longtime girlfriend Shala Stevenson, set out to capture it all.

Clayton has since quit the nonprofit world (he still has a few private clients in Lawrence, families with grown children who need assistance) and devotes most of his time these days to photography. 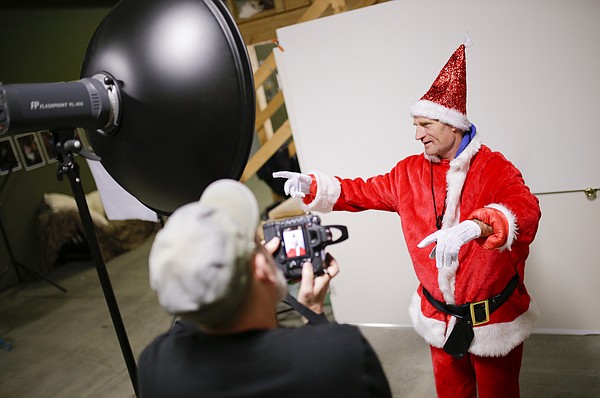 Lawrence photographer John Clayton reviews an image during a Christmas card photo shoot with legendary Lawrence figure Dennis Abbott at the Lawrence Community Photo Studio, 720 E. Ninth Street Suite 6, on Thursday, Dec. 17, 2015. Clayton has been photographing Abbott for years in all varieties of Lawrence settings and locations. by Nick Krug

The women of Foxy by Proxy burlesque revue are some of Clayton’s most recurring subjects. They’ve had Clayton shoot their promotional images and performances for several years now, and their portraits line the walls of the Lawrence Community Photo Studio.

“He’s just very generous and available and awesome to work with,” says Jen Young, who performs with Foxy by Proxy under the name Scarlet Harlot. “He’s printed the only stuff that we have that’s actual physical copies of our on-stage images. Otherwise it’s all digital stuff floating around on the Internet.”

Other favorites include Card Table Theatre productions, the Lawrence Old-Fashioned Christmas Parade, Busker Fest (“it’s like crack for me,” Clayton says), dance performances at the Lied Center (Stevenson is the creative director there), and “anything cool that’s going on” around town.

Right now, that would be Dennis Abbott in his Santa suit.

Abbott, as those who have interacted with him might realize, most likely lives with some type of intellectual difference. Clayton won’t specify more than that, perhaps because he’s trying to protect his friend or because he doesn’t know — but, as Clayton points out, it doesn’t really matter.

Oftentimes, the folks who misunderstand Abbott simply don’t know him, Clayton says. The dolls, outlandish outfits and general quirkiness set Abbott apart from the crowd, so when someone tells Clayton that his photographs have “humanized” the iconic Lawrence figure, he’s touched.

“Those kinds of comments make me feel good about it,” he says. “The ones that really frustrate the hell out of me and make me angry are, ‘Thank you for taking care of him.’ No, I’m not taking care of him. That’s not my job. That’s everybody’s job.”

Abbott, Clayton says, doesn’t receive assistance from the state. Instead, he gets help — from Clayton and from countless others in Lawrence and beyond.

“When he has a specific need I can identify, that’s what the Facebook page is for,” Clayton says. “If I put on that Facebook page, ‘I need X amount of money for Dennis,’ I would have it within an hour.”

Sometimes, Clayton says, “all you gotta do is ask.”

For him, it’s not about the Facebook “likes.” Clayton doesn’t believe he has any special talent or gift.

“It’s the subject matter. It’s the fact that I know some incredibly interesting, amazing, creative people who do really cool stuff, including Dennis, and the fact that I can capture them,” he says. “It’s like a snowflake. It’s only there for a minute and then it’s gone.”

I honestly love the fact that this community supports Dennis the way they do. It would be so easy to exclude him from the community. But I've seen first hands numerous business open their doors to Dennis no questions asked. I've seen the artwork embraced on the walls of Z's. I've seen people wave at him as he pushes his cart down 23rd. It really is a testament to the openness and accepting nature of this town and is why I love living here.