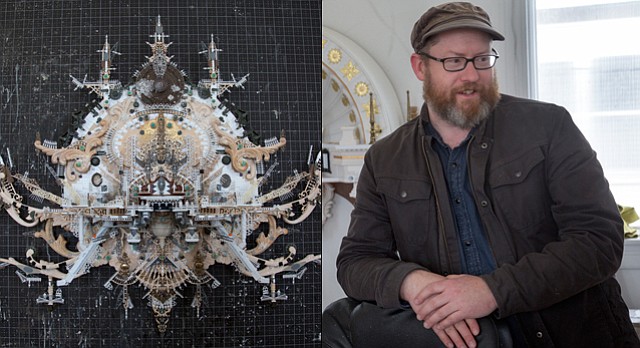 Lawrence artist Kris Kuksi works out of a old church in North Lawrence, creating intricate multimedia assemblages out of model kits and other small pieces that require a steady hand and an open mind. His exhibition at the Lawrence Arts Center, "Kris Kuksi. New Works," opens Jan. 15.

He’s been commissioned to create a large-scale sculpture for Nike’s Oregon headquarters (CEO Mark Parker is a longtime fan, and several of Kuksi’s works reportedly decorate his office walls), and less than two months ago, he wrapped up his fifth solo show at New York City’s Joshua Liner Gallery.

His art — intricate, sometimes macabre, mixed-media assemblages that evoke a Baroque-meets-industrial sensibility — can fetch more than $100,000, but right now, Kuksi is facing the “big demand” of the Lawrence art market.

Scattered throughout his North Lawrence studio are the pieces — in various stages of completion — that he intends to show at his first official Lawrence Arts Center exhibition, opening Jan. 15. 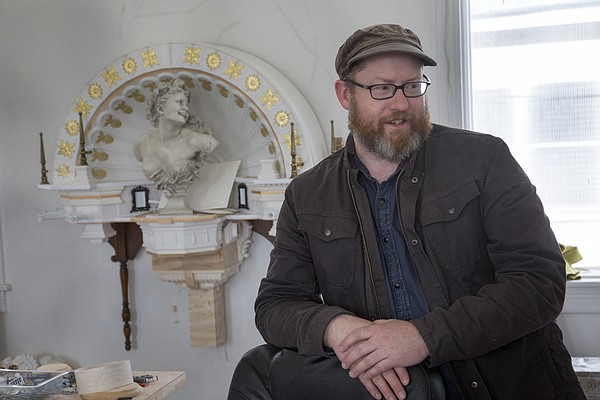 Lawrence artist Kris Kuksi works out of a old church in North Lawrence, creating intricate multimedia assemblages out of model kits and other small pieces that require a steady hand and an open mind. His exhibition at the Lawrence Arts Center, "Kris Kuksi. New Works," opens Jan. 15. by Richard Gwin

“I feel like I’ve got to prove myself in the Lawrence community — put ‘LFK’ on everything I make,” jokes Kuksi, who relocated his family from Hays to Lawrence roughly two years ago.

It was his wife’s job, not Kuksi’s, that prompted the move. But Kuksi, who has two Lawrence studios — the 118-year-old building at 647 Maple St. that originally housed St. James African Methodist Episcopal Church in North Lawrence, and a second studio in a former auto repair shop in East Lawrence — seems to be settling in nicely here.

Born in Springfield, Mo., and raised by a single mother in the rural seclusion of a then-undeveloped stretch of south-central Kansas called Maize, Kuksi isn’t just accustomed to being alone — he prefers it, in some ways.

“I think just the creative solitude of being in a studio and building something is what I’m ultimately destined to do and have been doing,” Kuksi says.

With two brothers, each approximately a decade older, and a grandmother charged with baby-sitting who stayed indoors while Kuksi played outside, the artist learned to “develop an imagination.”

He had to, both on the long rides to and from school (Kuksi was always the last kid to get off the bus) and at home, where he lamented his family’s lack of cable TV.

Kuksi was raised on PBS (nature documentaries and lots of “British stuff” like Monty Python and “Doctor Who,” mostly), which at the time was a source of begrudgement that Kuksi now credits with fueling his creativity — “if it hadn’t been that way, I probably wouldn’t be doing what I’m doing,” he says of his cable-free childhood.

Rural, conservative Maize couldn’t have been further removed from the rococo architecture and Hieronymus Bosch paintings that later influenced him as an art student at Fort Hays State University.

“It wasn’t until I’d grown up and gone to Europe for the first time that I really felt like, ‘Wow, this is it,’” Kuksi says. “But I love the modern world and that aesthetic, the rigidity and the sharp edges. So, it’s all about collapsing the chaos together into some kind of visual harmony.” 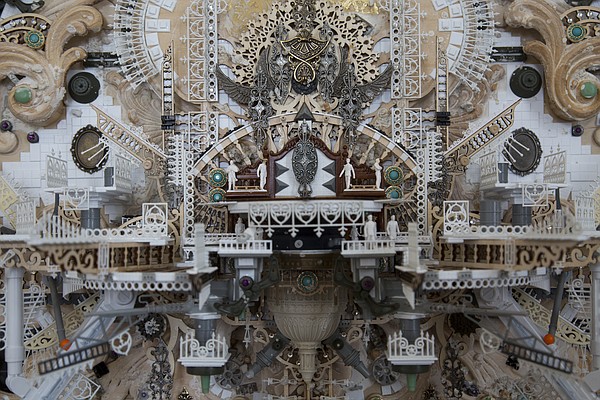 His work famously involves taking thousands of tiny pieces from model kits — dollhouse fences, miniature tanks and machine guns, army men — and combing then and reshaping them, among other tidbits such as jewelry parts, into large and elaborate assemblages.

The pieces are “busy, but then, also peaceful,” Kuksi says. He plays with polarity — light and dark, masculine and feminine, good and evil. There’s always a story, or stories, behind each piece, but Kuksi delights in leaving interpretation up to the viewer.

“If you don’t have the full puzzle together, it’s a little bit more interesting, because your mind gets to fill the gaps,” he says. “I like that sort of suggestion where you’re not going to give all the clues. You’re just going to tell part of the story.”

He’s discussed the idea of a Kansas theme with Arts Center exhibitions director Ben Ahlvers, perhaps “The Wizard of Oz” or Sam Brownback commentary, though Kuksi says he’s not sure yet — “I may do something very different or I may do something well in line with what Ben and I chatted about.” 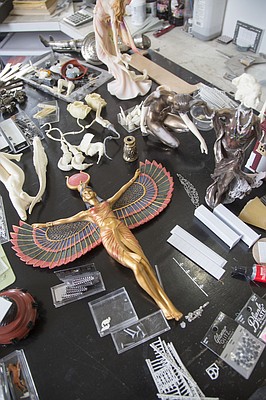 Only a day before, the major component of the show’s piece de resistance arrived at Kuksi’s studio. He’s particularly jazzed about the 8-foot-tall giraffe statue purchased online (a remarkably similar-looking product from the same retailer has been marked down to $995 from $1,250, as of press time) that he plans to transform into a large-scale installation that will reside in the Lawrence Arts Center lobby.

The giraffe will be outfitted with some accessory, maybe a “fancy saddle,” and attached to a series of pedestals that essentially form a fantastical chariot of sorts. Kuksi doesn’t want to give away much more than that, but, rest assured, it will be several, several feet long.

It’s an ambitious project, especially considering the modest time frame Kuksi is working with, but he doesn’t seem all that worried.

“I’ve always learned that I can’t push it in one direction too much. It doesn’t work that way,” he says. “Art is a weird force. You could obviously push yourself into it and do certain things because you feel like you need to, but there’s something about surrendering to it that actually makes for really good work.”