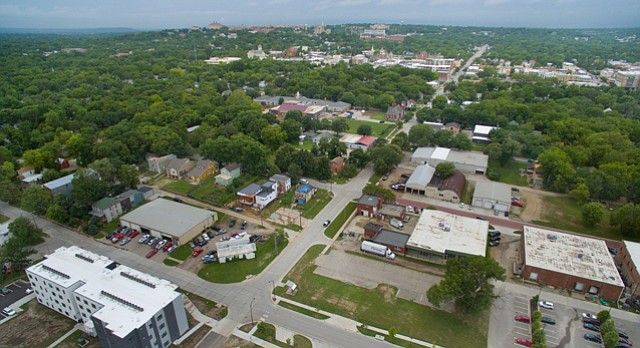 A westward view shows Ninth Street as it stretches toward downtown Lawrence.

A design plan introduced to the East Ninth Citizen Advisory Committee last month made a second appearance, with amendments, in the committee’s meeting Wednesday evening.

Josh Shelton, a principal with architecture firm el dorado inc., presented the plan, which offers a complete-street design with a narrowed road, increased green space and the addition of more ADA-accessible sidewalk (measuring at least 5 feet) while preserving Ninth Street's sections of historic brick. Under the plan, in areas where widening would be impossible, Shelton said another sidewalk could be added.

One of the most talked-about additions was the concept of a sharrow, or a shared-lane marking, from New Hampshire Street running east to Delaware Street. Shelton said the sharrow would narrow East Ninth Street from 37 feet, by his estimate, by 24 feet, in effect slowing traffic to allow bikes and cars to travel at a the same speed at a slower pace. 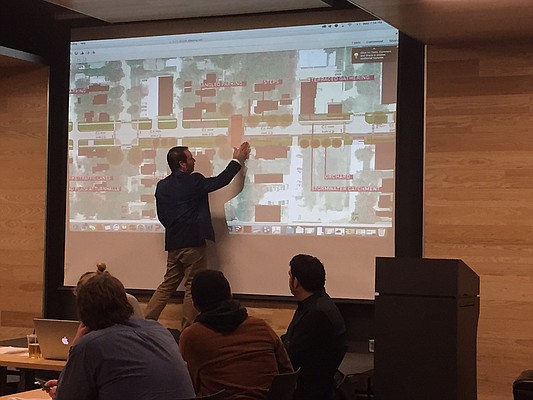 Phil Collison, representing the East Lawrence Neighborhood Association, expressed concerns about the “loss of the dedicated bike lanes” down Ninth Street. In el dorado’s plan, specific lanes for cyclists would only remain between Massachusetts and New Hampshire streets.

“It seems like we’re taking parking that residents used along Ninth Street and we’re shifting it down to the end of the block to the Warehouse Arts District and the Turnhalle (building),” said Collison, who also repeated concerns from December’s committee meeting about the plan’s dual sidewalks and who would be responsible for shoveling them. “A lot of residents have become dependent on parking along Ninth Street.”

Artist Dave Loewenstein, who lives and works in East Lawrence, agreed. Loewenstein said he notices residents using the parking space along the 400 block of East Ninth, where his studio is located, every day.

But Shelton disagreed, saying he had not “experienced a large amount of parking” occurring along the thoroughfare and that he hopes his plan will encourage more walking and cycling with its ADA-accessible sidewalks, green space and sharrows.

“Our thought was that through the neighborhood, it would start to feel more like a really generous pedestrian experience and a lot of green space,” Shelton said. “If the feedback is generally that parking is valued more than having that green space in this condition, we would go back and look at it.”

The green space in question includes the planting of native grasses along the curbs. Shelton said the grasses could work as part of a stormwater management system in which water is filtered through the plants and dirt before reaching storm sewers at intersections.

Shelton also suggested the addition of terrace steps in front of the historic St. Luke AME Church at 900 New York St., which he said would become an “expression of a front porch” where church goers and members of the public can gather.

St. Luke Rev. Verdell Taylor said the plan “made sense” to him, and acknowledged the church’s steep grade, a challenge to ADA accessibility, needed to be addressed. The proposed entrance would follow ADA guidelines.

“I don’t want you all to perceive that you’re unloading concerns on us, and I don’t want to walk away feeling like, ‘Boy, we’re buried in concerns,’” Shelton said, later adding that he appreciated the flow of ideas between his firm and East Lawrence neighbors. “We’re getting closer and closer each time.”

“We have one shot to do it right, and I think we’re getting pretty close,” Amyx said.

Update: This story originally described the plan as widening East Ninth Street, which is incorrect. The plan would actually narrow the street by about 13 feet, with the sharrows having the intended effect of slowing traffic to allow bikes and cars to travel at the same speed at a slower pace.