The stories behind the storytellers: Langston Hughes Award winners to be honored Monday 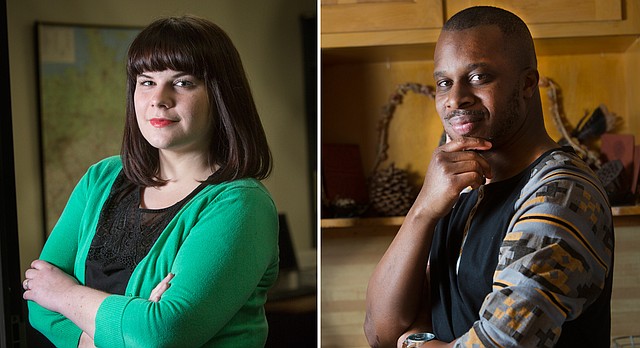 On Monday, two Lawrence scribes will be honored with the Langston Hughes Creative Writing Award, given annually by the Raven Book Store and the Lawrence Arts Center to Douglas County residents who continue in the celebrated writer’s tradition of portraying life experience through poetry and prose.

Feb. 1 just happens to also be Hughes’ birthday, and, as in past ceremonies, the honorees will mark the occasion with a slice of birthday cake. The event is free and open to the public, and will take place at the Lawrence Arts Center, 940 New Hampshire St., at 7 p.m.

Kate Russell and Tai Amri Spann-Wilson, this year’s winners for fiction writing and poetry, respectively, have a lot to celebrate beyond the physical award and its $500 prize.

The Langston Hughes Creative Writing Award ceremony will be held at 7 p.m. Monday at the Lawrence Arts Center, 940 New Hampshire St. The event is free and open to the public.

The two first-time entrants are both relative newcomers to the Lawrence literary scene, having grown up on the East Coast and only recently relocated to the Kansas town where Hughes spent several years of his childhood.

Oftentimes, the award bearing his name offers recognition and acceptance for writers who have been working quietly for years or whose careers are “just starting out,” says Elizabeth Schultz, a retired Kansas University English professor and founding member of the Langston Hughes committee.

Schultz praises this year’s winners, who “could not be more different” in style.

“Russell’s stories are filled with suspense and they’re driven toward an end that you can’t anticipate. They’re deceptively simple,” she says. “Whereas Tai Amri’s poetry is in no way deceptive…it’s all out there from the beginning.”

Here are the stories behind the 2016 Langston Hughes Creative Writing Award honorees. 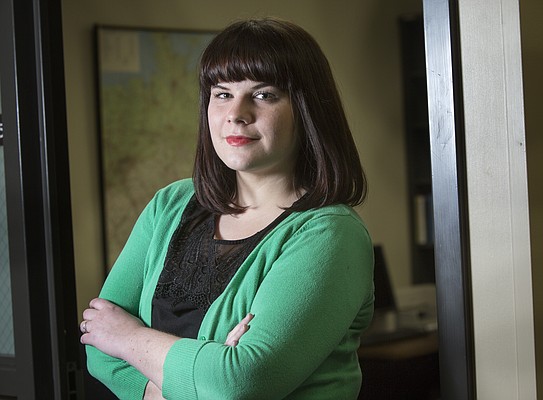 Kate Russell, a PHD student in creative writing at Kansas University and New England native, is the fiction winner of this year's Langston Hughes Creative Writing Award. by Richard Gwin

Growing up outside a tiny hamlet near Bangor, Maine, Kate Russell lived quietly. Her existence there was rural and isolated — the family home located “literally,” she says, in the middle of the woods — but even secluded from the noise of town, her mind was buzzing with activity.

There were no neighbors. No kids her age to play with. So she wrote, fueled by the literary tradition of her native New England, Jane Austen and the Brontë sisters, and the sweeping drama of Broadway musicals such as “Phantom of the Opera” and “Les Miserables."

Russell spent much of her childhood “writing silly little stories,” the 31-year-old now recalls. “I’ve been doing that forever.”

The stories from her Langston Hughes award-winning manuscript are anything but. Originally published in “Quarterly West” and “Mid-American Review,” respectively, “Loup” and “Pup” are certainly outlandish. Yet “silly” doesn’t quite describe Russell’s disturbing yarns in which animals talk to, cuddle with and occasionally kill us.

Russell is especially drawn to dogs — or, in this case, canines in general — because of the “unique relationship” they share with humans. We welcome them into our homes and love them as we would a family member, but sometimes, in our urge to humanize dogs, we can forget their inherent animalness — “creating them to be what we want them to be,” says Russell, a PhD student in creative writing at KU.

“A dog can pick up on really, really subtle human behavior, and so that’s what I keep exploring in my fiction,” she says. “Even though I love dogs, I try not to be so sentimental in my writing.”

“Loup,” inspired by the real-life saga of a Siberian town terrorized by a “super pack” of 400 wolves, tells the tale of a woman who falls in love with a wolf and is then slowly eaten — limb by limb, day by day — by her pet-turned-lover.

It’s an exploration of what it means to give consent (particularly when that impetus falls on only one person in the relationship) and “the cycle of abuse” that Russell observed in her small town. Isolation, she says, often keeps the abused complacent in their harmful relationships.

“Pup” tackles that same theme. In a bizarre twist, its protagonist gives birth to a dog. The father, an abusive man who didn’t want the baby in the first place, tries to pet his “daughter” in the park one day. The mother attempts to “save” him, but even she can’t ignore her offspring’s “raised hackles, her curled lips, her white teeth ready to snap.”

The story is fantastical, but rooted in real life. In her late 20s, Russell, very much aware of her high school and college classmates’ impending marriages and pregnancies while stuck in her own unfulfilling relationship, decided to adopt a puppy.

“At first I thought maybe I’ll write this really positive essay about adopting a dog and how great it was and how much fun that experience was for me,” she says. “But that’s not really the type of writer I am.” 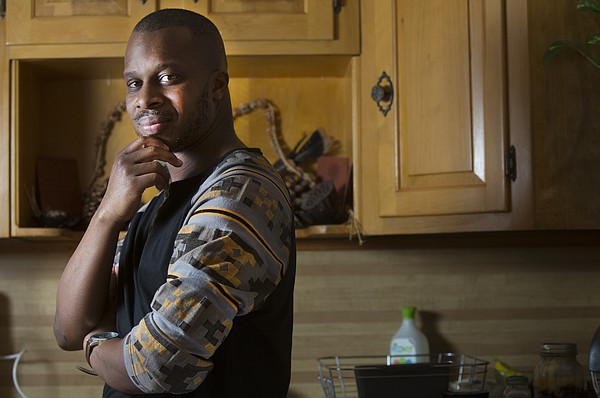 Tai Amri Spann-Wilson, this year's poetry winner of the Langston Hughes Creative Writing Award, deconstructs race, class, gender and sexuality in his work, drawing from his Quaker roots in Philadelphia and New Jersey. by Richard Gwin

“It’s a little surprising, to tell you the truth,” Tai Amri Spann-Wilson says of his Langston Hughes award for poetry.

Writing has always been a “passion” of his, having emulated the celebrated author since a formative class on the Harlem Renaissance in college, but not a skill he ever expected to make money with.

Ironically, Spann-Wilson felt as if he had given up on his writing career by the time he relocated from Oakland, Calif., to Lawrence in June 2014. He had wanted to simplify his life and shed the financial stress of living in the Bay Area. Entering his manuscript in the contest at the encouragement of his partner, Shannon Ryan, felt “almost like a last-ditch effort to see if anybody was interested,” Spann-Wilson says.

Clearly, somebody — or really, the somebodies of the Langston Hughes judging panel — was.

The win has “reinvigorated” Spann-Wilson’s passion, and the preschool teacher and youth minister is now actively searching for an editor and ultimately, a publisher, for his Langston Hughes-winning manuscript, “Sweet Black Boy.”

Like his other writings, the poems forcefully yet sensitively deconstruct issues of race, class, gender and sexuality, drawing from his roots in Philadelphia and New Jersey while incorporating his spiritual interests.

“One of the major tenets of Quakerism is equality, and so in my Quaker community that I grew up in, I was always taught that every voice is equal,” Spann-Wilson recalls. “I believed that what I had to say was just as important as what anyone else had to say, and vice versa. I’ve always seen my truth as being valid and having weight.”

Even now, in a town that he loves for its rich abolitionist history and his beloved circle of “activists, anarchists, preachers, pastors and mystics,” Spann-Wilson can’t help but feel like a bit of a misfit. He’s always been that way, and doubts it’ll ever change.

Still, he says he’s embraced his new hometown and, with his recent award marking a sort of unofficial debut into the Lawrence literary scene, hopes to build stronger relationships with his fellow writers. “I need critique of my work, suggestions…I need to share it with people,” he says of “Sweet Black Boy.”

With the birth of his first child less than two weeks away, Spann-Wilson says he’d like to raise a family here. He also wants to see change in Lawrence, a place that he describes as experiencing “liberal bubble-ness,” where certain social issues, such as the Black Lives Matter movement, seem to be met with apathy.

That’s not Spann-Wilson’s style. He’d much rather prefer to “stir up trouble,” just as he did in his college days and among the queer writers of color he befriended in the Bay Area.

“I’d like to see Lawrence wake up a bit. I hope my writing wakes people up,” he says. “That’s the purpose.”