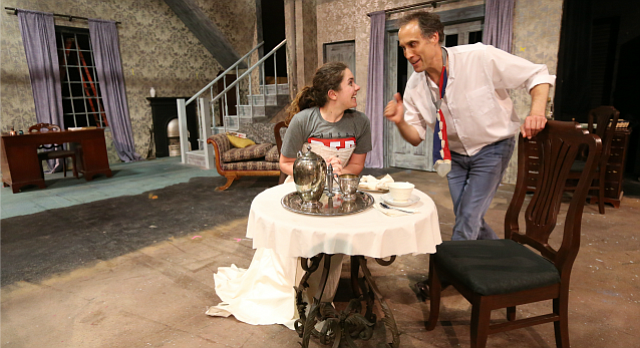 Mrs. Manningham, played by Abigail Sharpe, talks excitedly with her husband, played by Michael Samuel Kaplan, during a rehearsal for "Angel Street" on Friday, July 8, 2016 in the William Inge Memorial Theatre at Murphy Hall on the campus of Kansas University. "Angel Street" opens July 22.

Mary Chase, the playwright behind the 1944 classic “Harvey,” was supposedly inspired to pen the Pulitzer-winning comedy about a man and his “imaginary” friend (who also happens to be a six-foot-tall anthropomorphic rabbit) after witnessing a widowed neighbor return to work in the wake of her son’s death.

It was 1942, and the young man had been killed in action in the Pacific theater of World War II. Watching her neighbor trudge out to the bus stop that day, a week past learning of her son’s death, Chase thought to herself, “Gosh, could I ever write something that would make this woman smile again?”

That’s how director John Rensenhouse tells the origin story of “Harvey,” which kicks off KRT’s third season Friday at Murphy Hall’s Crafton-Preyer Theatre. The play will be performed in rotation with Patrick Hamilton’s “Angel Street” throughout July.

“Just to know that it’s really a war play — that it was borne out of the grief of loss of life during the war, which was quite a monumental event,” Rensenhouse says, remarking on what “struck” him the most from his research of Chase’s quirky comedy. "She really wanted to write an antidote to that terrible grief people were feeling. At first glance, you can write it off as an enjoyable piece of fluff, but it’s really much more than that.”

Tickets are $18 for adults, $17 for senior citizens and $10 for students, and can be purchased online or at the University Theatre box office.

Elwood, the protagonist of “Harvey,” prefers being pleasant to being smart. He’s charming, eccentric and would rather live in the moment (with a drink in his hand, often) than worry about tomorrow, much to the chagrin of his social-climbing family.

Their embarrassment with Elwood (played here by New York City actor Michael Samuel Kaplan) only intensifies after the arrival of Harvey, who remains unseen throughout the play, and results in a comedy of errors when Elwood’s sister decides to have him committed to a sanitarium.

As doctors (psychiatry was only just “coming into vogue” at the time, Rensenhouse points out) attempt to label and cure Elwood’s delusion, Veta (Lawrence’s Jeanne Averill) begins to question the need for a remedy to her brother’s so-called madness. What’s the harm in Harvey, even if he doesn’t exist? (And he very well might.)

“We should treat those who are seen as crazy as people of worth. They have a different level of understanding,” Rensenhouse says. “For me, it becomes a really magical play about opening yourself up to the possibility of magic in your life and that there are other ways of seeing things.

“From my point of view, the mental illness in ‘Harvey’ is in those supposedly curing those with mental illness,” he adds. “Turns out, the crazy guy is the sane one.”

“Angel Street,” which opens July 22 at Murphy Hall’s William Inge Memorial Theatre, is in many ways a vastly different play. It’s set in London at the end of the 19th century, where gaslights (Hamilton’s Victorian thriller debuted as “Gas Light” to English audiences in 1938) illuminate the foggy streets and homes of bourgeois families like the Manninghams.

Mr. Manningham (played by “Harvey” actor Michael Samuel Kaplan, in the repertory fashion), we soon learn, is systematically attempting to drive his wife (Abby Sharp) insane, at one point convincing her that she is only imagining the gaslight in the house going dim. Only later do we learn why Mr. Manningham would go to such lengths to hide the truth about the gaslight, which in reality is softening at very crucial points in the play.

As in “Harvey,” the people so easily dismissed by society — in this case, a Victorian housewife supposedly prone to female silliness and hysteria, as physicians of the day would contend — often possess more wisdom and logic than expected, if only others around them would listen.

“She’s not insane at all,” says “Angel Street” director Peter Zazzali, an assistant professor of theatre at KU. In fact, she’s “the heroine in this case.”

“In Victorian society, the irony of course being that Victoria is on the throne, was terribly patriarchal,” he says. “A woman’s place was essentially as a housewife, a mother or a servant.” For many perfectly sane (but emotionally, physically and/or intellectually repressed) women like Bella Manningham, the threat of “wasting away in a sanitarium,” like her own mother did, was very real.

The female characters in “Angel Street” are all stationed “in roles of servitude,” essentially, except for Detective Rough, played by Jeanne Averill. It’s an anachronistic twist on the original play, which, in melodramatic tradition, portrayed Mrs. Manningham as a damsel in distress to be passively rescued from her villain of a husband by a chivalrous (male, in accordance with the time period) police officer.

Instead, in Zazzali’s version, Detective Rough empowers Mrs. Manningham to take revenge on her tormentor and crack an unsolved murder case in the process, “this time at the hands of two women,” Zazzali says, “which I think is a very neat and unique take on it.”

Otherwise, he says, “The charm of the Victorian thriller is still very much intact.”

There’s a reason why “Angel Street” remains one of the longest-running non-musicals in Broadway history.

“It’s a wonderfully written Victorian thriller in the spirit of melodrama that I think will be extremely entertaining for KRT audiences precisely because it’s filled with suspense and thrills and mystery and high drama,” Zazzali says, adding, “It’s just a real treat for the audience.”