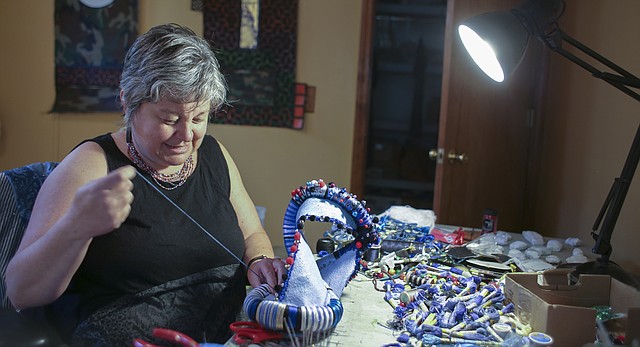 Tanya Hartman, an associate professor at Kansas University's department of visual art, works in her home studio Friday afternoon, July 22, 2016. Hartman will be showing some of her work at the KU Faculty Exhibition, opening Friday at the Lawrence Arts Center, 940 New Hampshire St.

In the early 1930s, with the Nazi Party quickly escalating to a majority in the German parliament in 1932 and Hitler’s appointment as chancellor less than a year later, Hartman’s grandfather, a Berlin-born Jew, saw the writing on the wall and left his native Germany. He traveled first to Sweden, Hartman remembers, where he met his future wife — another German Jew forced out of the country — before ultimately settling in Cuernavaca, Mexico.

There, he and his family would make a life for themselves in a culture that was alien to them but at the same time boasted a fairly robust Jewish community, piecing together various traditions to create a sense of home.

Decades and generations later, their stories — and the stories others like them — are still being told through Hartman, now an associate professor of drawing and painting at Kansas University.

“Their sense of displacement and trauma certainly affected my aesthetic and my own view of the world,” Hartman says of her beloved grandparents, whom she visited in Mexico frequently as a kid.

Hartman is one of approximately 20 scholars and artists to show their work at the KU Department of Visual Art’s annual Faculty Exhibition, opening Friday at the Lawrence Arts Center.

The exhibition, which will make its debut with a reception from 5 to 9 p.m. Friday, runs through Sept. 24.

For years, Hartman has employed both traditional painting techniques and more experimental methods such as stenciling, stitching and stippling in an artistic style all her own. Often adding collaged or painting text onto her surfaces, Hartman likes to think of her work as blurring the lines between literature and visual art.

Hartman, who spent her childhood in mostly New York City and London while also logging several trips to Mexico, was “never a great lover of cities,” despite the museums and art galleries and concert halls they offered in spades.

Instead, she’d hide away in her bedroom, far away from the “urban despair” of 1970s New York City, and devour books like “The Cricket in Times Square,” “All-of-a-Kind Family” (about a clan of Jewish immigrants living in the Lower East Side at the turn of the century) and her favorites, Laura Ingalls Wilder’s “Little House on the Prairie” series.

New York City, she says, “definitely made me a reader,” which in turned “shaped my art.” 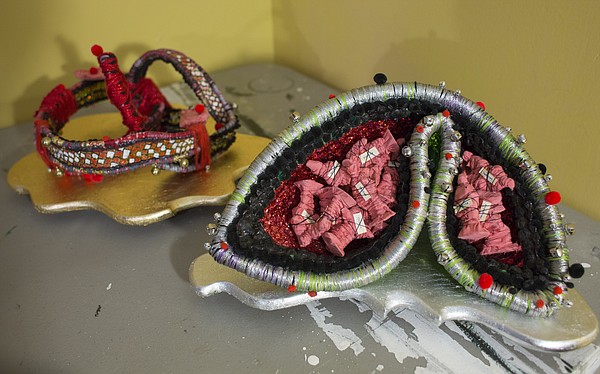 “I think the illustrations in them still affect me, the way I draw,” Hartman says of the “Little House” books that painted such a vivid picture of the Kansas prairie in her young mind all those years ago.

Nearly 20 years after settling in Lawrence, she’s happy to report that Kansas has indeed lived up to the romantic hype. She loves the “peacefulness” of it and the lack of urban blight that she’d witnessed as a kid in New York City.

“I’ve come to feel quite rooted here,” Hartman says. “I think even if you grow up in a place, you can feel as deracinated as a refugee if you don’t inherently fit in.”

And then there’s the feeling of being welcomed into a community, like Lawrence, “even if you’ve come as an outsider,” she says. For Hartman, home is where you make it.

Over the last five years or so, she’s been creating art based on the experiences of refugees from war-torn regions seeking a safe haven in the United States. Lately, that’s morphed into pieces inspired by Hartman’s dreams, which she sees as manifestations of the many refugee stories she’s encountered with the Congolese, Syrian and Sudanese diaspora in Kansas City.

“Night: War Cone and Red Crown,” the mixed-media piece she’s chosen for exhibition in the Arts Center show, is “about war and power,” Hartman says. It’s a way of processing the personal experiences of the world’s many refugees as well as her own anxieties about today’s political climate.

All human beings share the same needs, she says — for security and hope and all those other intangibles — just as they always have. In so many ways, the refugees pouring into Kansas City and other communities across the country and globe are not much different from Hartman’s grandparents or the many Jews who fled Europe leading up to and during World War II.

It’s worth noting, also, that the war-torn regions from which refugees are escaping in droves today were once sites of refugee camps — in Syria, Egypt and Palestine — for tens of thousands of displaced Europeans in World War II.

“I always want my work to create bridges between people, so that they realize our inner worlds, no matter how different we are culturally from one another, are so similar,” Hartman says.

“I think the reason I make artwork,” she adds, “is hoping somehow it’ll make the lion lie down with the lamb.”