Ephemeral art, 'Sound Shapes' among those on display in Downtown Outdoor Sculpture Exhibition 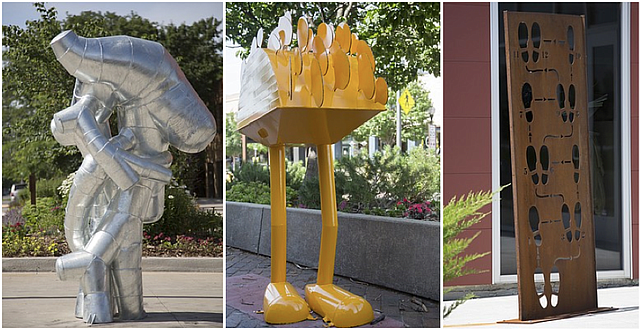 If you've been wondering what kind of business, exactly, that giant, yellow-orange taco with feet has in downtown Lawrence, we have some answers for you.

The "taco," sadly, is not actually a taco, but rather one of seven pieces — plus one site-specific installation that gives a whole new meaning to the old "one man's trash is another man's treasure" adage — in this year's 28th annual Outdoor Downtown Sculpture Exhibition.

Most of this year's pieces — selected out of a pool of 38 proposals by juror James Martin, a Kansas City independent consultant, curator, educator and writer — come from local artists, notes Porter Arneill, the city's director of arts and culture. The experience, which was expanded this year to include more unconventional works meant to introduce the public to "other ways of approaching public art," has been a "happy" one, Arneill says. 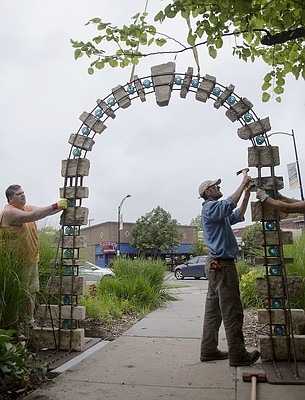 Serving as a gateway to and from South Park and downtown Lawrence, Rasmussen’s “Blue and Gold” is an arch made of reclaimed limestone, steel and glass, all “unrelated materials atypical to public sculpture,” the City notes in its exhibition literature.

The artist hopes his arch may inspire people to appreciate the “beautiful architecture and green spaces in Lawrence,” including the adjacent Douglas County Courthouse, “with its limestone arches and blue-green copper accents.”

Jayhawks of a certain age, take note: The limestone in this project is salvaged from the demolition of Kansas University’s McCollum Hall — born 1965, imploded 2015. (The glass insulators came from original communications lines that traversed Kansas.) 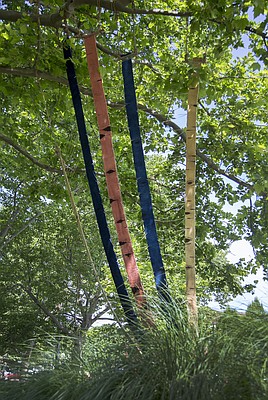 Neil Goss was just 15 years old when his dad passed away. Years later, Goss remembers being struck by memories of the funeral, “seeing the people my father had touched during his time on Earth,” he says.

Goss’ work, including “Medicinal Birch,” is ephemeral, much like the human lifespan in the grand scheme of things, but is designed to create a lasting impact on those who experience it, much like Goss’ father on the people who knew him.

In “Medicinal Birch,” the environmentally conscious artist has strung five woven “birch trees” — each made of hemp and wool fibers, and tinted with medicinal natural dyes — from the branches of an actual, living sycamore tree in South Park. The “birch” strips are grounded to a hand-made ceramic pot planted with passion flower vine.

Throughout the year, the vine will tentatively grow up the textile “trees,” which will simultaneously lose their coloring, with the Earth reclaiming most, if not all, of the dye-medicine, which includes locally grown goldenrod and madder red.

The passion flower vine, Goss is happy to report, has already started on its climb. He’s aware of the delicacy of his piece, and is putting his faith in passersby to treat it kindly — “you’ve got to,” he says. “I hope the community embraces it.”

“It’s about thriving and making the most of each day as it passes,” Goss says of “Medicinal Birch.” 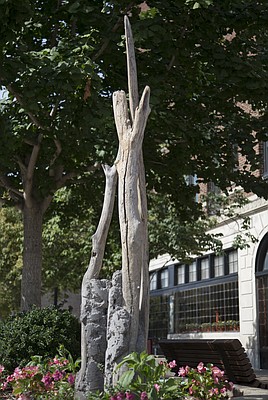 Made with locally scavenged driftwood and hand-formed cement, Balbuena’s piece is partly intended to demonstrate the tension between natural and man-made materials. The anchoring steel encompassing the trunk of the “tree” captures both in a “striking prismatic form.” 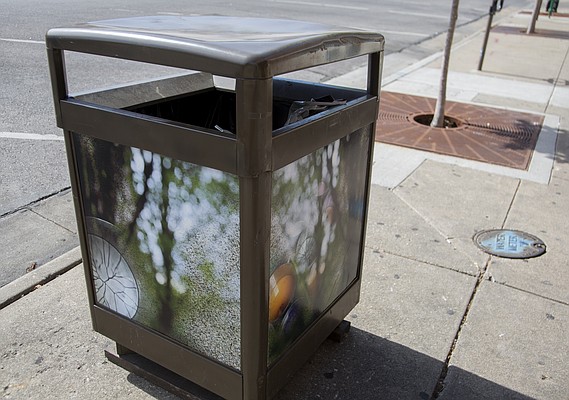 New to this year’s exhibition, Toivanen’s “Treasure Hunt” isn’t so much a sculpture (it’s not one at all, really) but a site-specific installation sprinkled along Massachusetts Street in the form of trashcans turned “visual treasures.”

Some are fully encircled with imagery, “as if lit from within.” Others give the illusion of digital imagery integrated into the trashcans’ man-made river rock pebble panels. All, at least in intent, offer “surprise, discovery and delight” to downtown pedestrians. 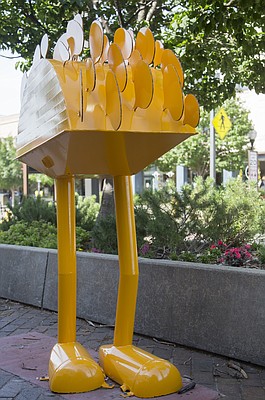 Dave Root - Portage - in the middle of the 800 block, east side on Mass. by Mike Yoder

Contrary to some of the half-baked theories you and your friends may have cooked up about “Portage,” Root’s playful sculpture is not a taco, street taco, walking taco, nor any iteration of the tasty Mexican snack.

According to the artist, “Portage” is a depiction of “the seemingly impossible task of hauling a vehicle designed for one surface over another that requires carrying; like an infant, canoe or excess baggage.” The vehicle in this case is apparently a boat "riddled with barnacles or some kind of hanger-on."

Carrying the load across land might be awkward at first, but, once back in the water, the boat arrives with a great relief “that the weight is off, but also a sense of ease that the water can be traversed without more fatigue and danger.”

What does the sculpture "Portage" by Dave Root (in the 800 block of Massachusetts Street) look like to you? 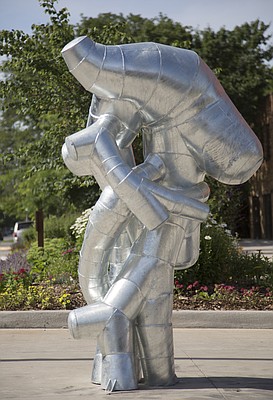 Will Vannerson - Borborygmid 8 - at Lawrence Public Library. by Mike Yoder

Vannerson’s “Borborygmids” take their name from borborygmus, a medical term for the rumbling or gurgling noise made by the movement of fluid and gas in one’s intestines. The sculptures, including the one installed in the Lawrence Public Library’s outdoor plaza, “explore how essential, variable elements may form complex, visceral structures.”

"Dichotomies of growth/decay and accumulation/erosion" are all at play here, reflecting “a general situation of life in which direct observation fails to determine in which direction these forces are progressing.” 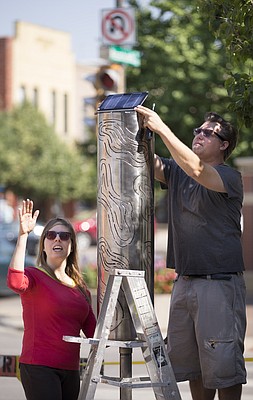 Lawrence artists and husband and wife, Shannon and Darin White install their plasma-cut perforated steel sculpture, "Soundshapes 2" at the southeast corner of Ninth and Massachusetts streets on Friday, June 10, 2016. The sculpture, which has a solar-powered illuminating effect, is one of eight to be featured in the Downtown Outdoor Sculpture Exhibition. by Nick Krug

When husband-and-wife artist duo Darin and Shannon White were installing “Sound Shapes” for the first time earlier this spring, passerby would often ask, “What is it?”

“That’s a pretty typical question,” Darrin says of the series he and Shannon — along with frequent collaboration from the public — have been working on since 2014. “They want a concrete idea of what something is, to be given an answer rather than think for themselves and engage with it to see what is says to us, how it speaks to us, what it means to us.”

The couple’s “Sound Shapes” series incorporates three-dimensional sculptural elements with sound wave shapes (the forms are a “collective idea” of what sound might look like, rather than a textbook image, Darrin says) cut out of metal that are both crowdsourced and intuited.

Instead, with “Sound Shapes,” the Whites are hoping to spark reflection in viewers about “the importance of words, the sounds we make and the things we say,” Shannon explains.

It’s a lesson she hopes will catch on in the months leading up to November’s elections, inspiring civil discourse over cable news network-style shouting matches.

“I think the process of discovering your voice as a person is really important, and the way that you share that with others is really important. Hopefully it’s empowering people, too,” she says of the exhibition’s “Sound Shapes” sculpture, “and not just a cautionary monument.” 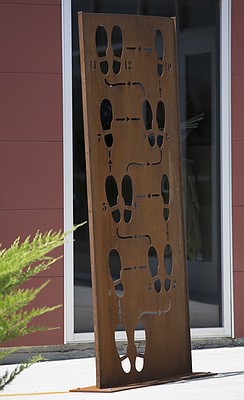 If you’re feeling footloose after a show at Theatre Lawrence, you might consider taking a stroll past Garnant’s “Dance Diagram” to try out your skills. The instructive sculpture comprises a “very basic” dance step diagram that has been enlarged and cut into 11-gauge steel. Apparently everyone, “young and old,” is capable of mastering these moves.