Weekend Guide: 'Much Ado About Nothing;' Dinner and a Movie: 'Ferris Bueller's Day Off;' Queen Elizabeth's birthday bash; What Floats Your Boat 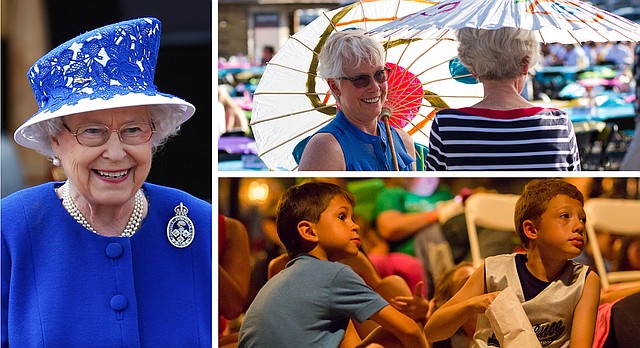 Weekend Guide for June 17, 2016: A birthday party for the Queen, What Floats Your Boat and Dinner and a Movie.

The hotly anticipated Free State Festival arrives this weekend (yay!) but won't kick off officially until Sunday (sad face). Fortunately, we've got a few ideas here to keep you entertained in the meantime, including but not limited to Shakespeare, dinner and a movie, and a birthday celebration fit for a queen.

(We've got you covered on the Free State Festival stuff, too. Check out our guide to festival events and our interview with festival headliner/comedian Maria Bamford from today's Journal-World.)

“Much Ado About Nothing”

The young thespians of the Lawrence Arts Center’s Summer Youth Theatre program are staging their second production of the season, Shakespeare’s “Much Ado About Nothing,” through Sunday at the Arts Center.

Directed by Elizabeth Sullivan, the Bard’s witty take on relationships, gender roles and deception is given a modern twist (it’s set in Las Vegas) in the Arts Center’s version.

Dinner and a Movie: “Ferris Bueller’s Day Off” 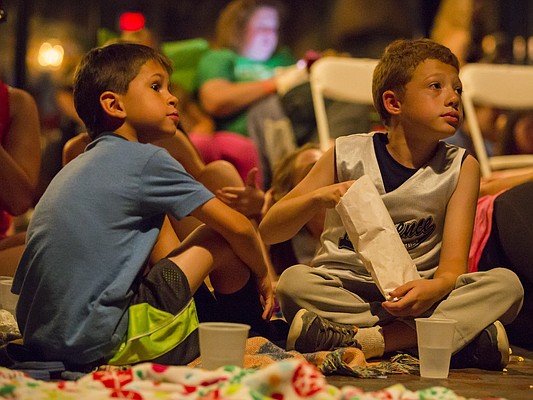 Nine-year-old Santiago DeGarmo, right, and 8-year-old Jack Navarro, both of Lawrence, sit on the floor of Abe and Jakes, 8 E. Sixth St., as they watch a free screening of "Back to the Future" Thursday evening, June 25, 2015. The free movie, which was originally supposed to be shown at the Library Civic Plaza, 700 block of Vermont, was moved because of weather concerns. It was one of several movies to be shown as part of Dinner and a Movie. by John Young

Bring your chairs, blankets and buddies to catch the beloved ‘80s classic (it’s celebrating its 30th anniversary this month) on the Lawrence Public Library lawn this Friday. The screening marks the return of the annual Dinner and a Movie summer series, presented by the library and Downtown Lawrence Inc.

Bring your own picnic if you like, or load up on munchies from the several downtown vendors and food trucks onsite. Downtown Lawrence Inc. will also have free popcorn and door prizes on hand starting at 7:30 p.m., followed by the movie at 9 p.m. Closed captioning will be provided for the hearing-impaired.

The Queen’s Birthday Bash at Brits 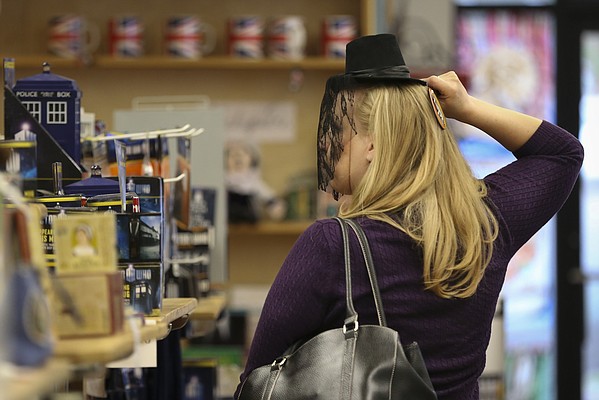 Brits shopper Beth Smith, of Topeka, tries on a veiled hat in the fashion of the popular British drama "Downton Abbey" on Thursday, May 14, 2015, at the downtown store. by Nick Krug

The downtown purveyors of all things British are celebrating Queen Elizabeth’s 90th birthday in style, with giveaways, sales, samples and more Saturday on Brits’ back patio.

Overland Park’s Clock Tower Bakery will also be on hand from 11:30 a.m. to 1:30 p.m. with sausage rolls, pasties (that would be the traditional English baked pastry, in this case), steak bakes and other treats available for purchase.

What Floats Your Boat 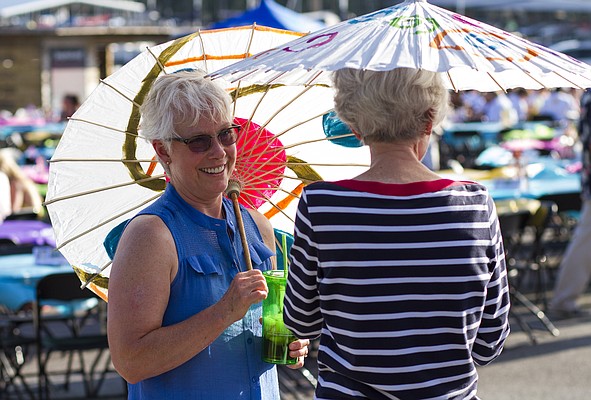 Becky Browning, left, of Baldwin, and Virginia Corran, of Lawrence, use umbrellas to shield themselves from the hot sun as they chat during Van Go's annual What Floats Your Boat fundraiser Saturday evening, June 20, 2015. at the Clinton Lake State Park marina. by John Young

Van Go Inc.’s 13th annual fundraiser kicks off a little later in the evening this year in an effort to avoid the heat, with “cool jazz” by Blueprint, dinner by Ingredient and Kansas’s City’s McGonigle’s Market, and cold ones (plus wine for sale) from 7 to 8 p.m.

The main event — the live auction of pieces created by teens and young adults in Van Go’s arts-based job-training programs — will be held from 8 to 9 p.m., followed by dancing under the stars with DJ Johnny Quest from 9 to 11 p.m.