Lawrence to host celebration of all things clay this week 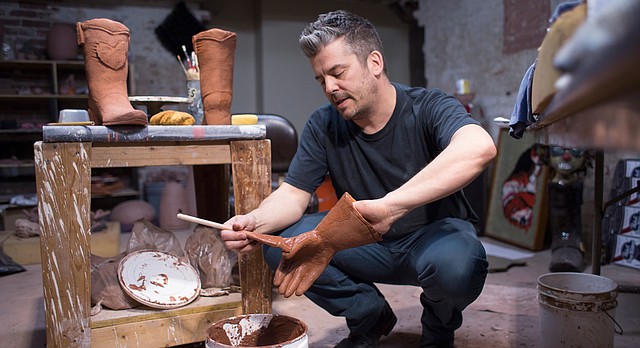 Ben Ahlvers, exhibitions director at the Lawrence Arts Center applies a glaze to sections of a larger ceramic piece that Ahlvers will show, in an exhibit titled "Ordinary Opposites" along with artist Russell Wrankle, Toquerville, Utah, at 2016 Main St. gallery in the Crossroads Arts District, March 15-19 in conjunction with the National Council on Education for Ceramics Arts conference in Kansas City this month. The Lawrence Arts Center, KU and Brackers Good Earth Clays of Lawrence are hosting several local exhibits and events in advance of the NCECA conference.

When Ben Ahlvers arrived in Lawrence 11 years ago, it was understood that he would be the first artist-in-residence in the Lawrence Arts Center’s ceramics residency program.

Ahlvers, now exhibitions director at the Arts Center, never completed the residency. Being hired only two weeks in as studio manager put a stop to that.

He has climbed the Arts Center career ladder steadily since then, helping to develop the institution’s ceramics program, the residency that originally brought him here and, perhaps most notably, the biannual Lawrence Arts Center Ceramics Symposium, which returns Friday amid a citywide celebration of clay in advance of next week’s National Council on Education for the Ceramic Arts conference in Kansas City.

That Lawrence will host this year’s pre-conference activities (the website teases the series of workshops, exhibitions, talks and demonstrations as “the conference before the conference”) is nothing short of a “strange, wonderful” culmination of the past decade’s efforts, Ahlvers says.

Ben Ahlvers, exhibitions director at the Lawrence Arts Center applies a glaze to sections of a larger ceramic piece that Ahlvers will show, in an exhibit titled "Ordinary Opposites" along with artist Russell Wrankle, Toquerville, Utah, at 2016 Main St. gallery in the Crossroads Arts District, March 15-19 in conjunction with the National Council on Education for Ceramics Arts conference in Kansas City this month. The Lawrence Arts Center, KU and Brackers Good Earth Clays of Lawrence are hosting several local exhibits and events in advance of the NCECA conference.

“Personally, for me, it’s a perfect storm of everything that I do,” says Ahlvers, an active artist in his own right, who will see his work exhibited at Kansas City’s 2016 Main as part of the pre-conference activities.

“I go to this conference every year, but I’ve never been in the host role before,” he says. “It’ll be cool to have all those people who I’ve talked to about Lawrence and the Arts Center and the exhibitions program, to have them come here and see it.”

The unprecedented “scope and scale” of Lawrence’s pre-conference programming — which began in January with a handful of Arts Center-organized exhibitions and will continue, in an expanded format, through March 19 — is an appetizer of sorts to the NCECA conference, slated for March 16-19.

The 50th annual event, billed as “the world’s largest event held in the world of ceramic arts,” is expected to bring more than 6,000 people to the Kansas City area that weekend, a record-breaking number by NCECA estimates.

Every year, the conference travels to a new city, creating an uptick of clay-based tourism in the surrounding region.

The Lawrence Arts Center has partnered with Kansas University and Bracker’s Good Earth Clay — and spent the better part of two years planning, by Ahlver’s estimate — to organize this month’s pre-conference activities.

This week, artists representing 11 different countries will descend upon the KU campus. On Thursday, Chalmers Hall is slated to host a “tea talk” from 1 to 2 p.m. with ceramicists from Foshan, China, as part of an exchange program Maude established with the city in Guangdong province.

Maude also expects art students from neighboring universities, among them Kansas State and Fort Hays State, to attend the KU festivities, which will culminate in a “fantastic frenzy of fire” at KU’s West Campus Chamney Barn Facility on March 14. The event, dubbed “Fire Spectacular,” will feature performance kilns, an impressive display known as an “iron pour” and a celebration dinner to cap off the week. 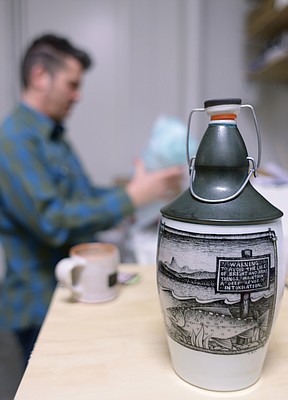 A ceramic growler made by potter Bradley Klem, Peoria, Ariz., with a fused image designed by artist Jason Walker sits in the foreground as Ben Ahlvers, exhibitions director at the Lawrence Arts Center, unpacks additional hand-crafted ceramic growlers now on display at Free State Brewing Co., 636 Massachusetts St. The growlers will be for sale and the exhibit is in conjunction with the National Council on Education for Ceramics Arts conference in Kansas City this month. The Lawrence Arts Center, Kansas University and Bracker's Good Earth Clays of Lawrence are hosting several local exhibits and events in advance of the NCECA conference. by Mike Yoder

At Bracker’s Good Earth Clays, festivities lean toward the sentimental. Cindy Bracker, who happens to serve as NCECA’s communications director, still works at the Lawrence clay supply her parents, Bill and Anne Bracker, opened in 1975.

She admits, proudly, to devoting her fair share of “advocating” for Lawrence as the site of this year’s pre-conference activities. In 2002, Kansas City also hosted the NCECA conference, and while Bracker's and the Phoenix Gallery put on an exhibition leading up to it, the programming wasn’t much compared to this year’s Lawrence efforts, Bracker says.

“I love the fact that we ended up with the amount of collaboration we did in bringing some amazing things to Lawrence,” she says of the 2016 pre-conference programming, which could attract anywhere from 300 to 1,000 visitors. “The number of artists coming here and the ceramic art coming to Lawrence is truly unprecedented.”

Dozens of her mother’s teapots, amassed over the years starting with one brought back by the elder Anne's late husband from an NCECA conference some decades ago, are on display at the family shop. The exhibition, simply named “Anne Bracker’s Teapot Collection,” will run through March 26.

“She always thought the teapot was the ultimate ceramic form,” Cindy says of her mother, who at 71 still devotes most of her time to running the family business at 1831 E. 1450 Road.

Bill Bracker, a former associate professor of design and ceramics department chair at KU, died of cancer in 1993. For 40 years, he and his wife, both founding members of the KC Clay Guild, were active leaders in the Lawrence Potters Guild and frequent participants in art fairs, art education conferences and other ceramics-related advocacy work.

On March 18, some 20 years later, he’ll be honored, along with his wife, for the pair’s contributions to ceramic arts in the Lawrence community and surrounding area with NCECA’s Regional Award of Excellence. The ceremony will take place at 5:15 p.m. in the Kansas City Convention Center, Grand Ballroom 2501B.

The recognition of her parents’ work — together, they built Bracker’s from a small studio in 1975 to the area’s leading supplier of clay, serving artists in the Lawrence community and neighboring states such as Nebraska and Missouri — is quite the momentous occasion for Cindy, who still gets emotional talking about her father more than 20 years after his death.

When Bill was sick with cancer, he developed a mantra that still hangs on the wall at Bracker’s Good Earth Clays. It reads, “To enjoy your job and feel that the extra effort is appreciated, how could anything else be more rewarding?”

“I think,” Cindy says, “there are a lot of people in clay who feel that way, too.”

For a full schedule of pre-conference events, visit www.nceca2016preconference.com.